Rob Marshall | Into the Woods

out of the woods

James Lapine (screenplay, based on his libretto), Stephen Sondheim (music and lyrics), Rob Marshall (director) Into the Woods / 2014

It seems strange, given my long admiration for and knowledge of American musical theater, that I had not seen Lapine and Sondheim’s successful musical Into the Woods previously. I missed its original Old Globe Theatre production in San Diego, shortly we after we moved to the West Coast (we were busily attending almost nightly dinners and events in Los Angeles during 1986), and for some explicable reason failed to see it in the late 1980s when it appeared on Broadway. Even more inexplicable was our failure to see it in 2002 when it was revived at the Ahmanson Theatre in Los Angeles and subsequently in New York.

But the coincidence of seeing a production just a week before watching it on the large screen in the film rendition, more than made up for my previous lack of attention to it. Of course I had heard Bernadette Peters’ rendition of “Children Will Listen” many times, and I knew that the work involved a twisted telling of several different Grimm Brothers’ fairytales. But I had remained in the dark, fortunately, about the convoluted plot-line.

All was finally revealed to Howard and me in a resplendent, if slightly trimmed-down version by The Oregon Shakespeare Festival, who were asked to repeat their engagingly skeletal production for the second season of the Beverly Hills Wallis Annenberg’s events.

This was not truly a “perfect” production—indeed given the work’s convoluted story and its self-consciously witty lyrics and patter, along with its bullet-quick pace, one wonders whether there could ever me a thoroughly resolved performance—but it was certainly an excellent example of what musical theater creativity is all about. If it was difficult, at times, to make out all the lyrics (which reminded me a bit of my endlessly-rhymed couplets in my own short musical attempts), we, along with the general audience, were certainly moved by the blithe performances and more affected by the many deeper subtleties of the Lapine-Sondheim telling. 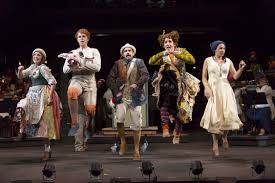 For these authors the woods was not just a slightly strange world in which frightening events often take place (Little Red Riding Hood’s descent in the stomach of a wolf, Jack’s amazing ascent into a world of giants, and Rapunzel’s torturous relationships with those whom she allowed to climb her hair up to her open window) but, in Lapine’s version, is a  locale through which Cinderella runs on her way home from the ball, and in which the Baker and his Wife, determined to break the spell of their barren relationship, seek out the trophies—a white cow, a red cape, a golden shoe, and corn-white locks—that will break the witch’s evil spell. It is a world where everyday life can be reconsidered, reality perceived in different dimensions, love and adventure explored, a rejuvenation attained. In songs such as “I Know Things Now” (sung by Little Red Ridng Hood), “Giants in the Sky” (by Jack), “Agony” (by the two princes), “It Takes Two” (by the Baker and His Wife), and “Moments in the Woods” (by the Baker’s Wife), the characters tell us what they have discovered and learned from their incredible “time out” in nature.

Yet the goal of nearly all of these figures is somehow, after their glorious new perceptions, to return to normalcy, to get “out of the woods” and return home to everyday life as quickly as possible. If the woods, as Little Red Riding Hood perceives is a world that makes her feel “excited and scared,” a world where the Baker suddenly discovers the need for communal action, and his brave Wife delights in the special sexual “moments” the woods have to offer, nonetheless, the forest is a dangerous place to which they do not wish to return, but are forced to in the second act by the giants—immense forces that control their of their lives and are fully capable of destroying them. Indeed, the great power of Lapine and Sondheim’s musical fable, unlike the Disneyfied world in which anyone of my age grew up, is that even in the imagination of children (and definitely in the child-like imaginations of peasants) evil happens: mothers are murdered, princes are discovered to be insincere, children are recognized as greedy and demanding appendages, witches are vain and selfish, and even the most ordinary group of citizens can suddenly turn upon each other with accusations. As LA Weekly film critic Alan Scherstuhl nicely summarizes it:

No matter how it performs in theaters, Stephen Sondheim’s and

curio unwary kids will stumble upon, to their bafflement and

betterment. The princess-party punch-bowl has forever been

The Annenberg production rambled and gamboled through and around the forest with hardly any sets, creating an enormous amount of locational atmosphere simply with lights and costumes. Fortunately nearly all the performers could act and, most importantly in this musical, could sing. Of my many favorite moments, I’d be derelict not to mention Kjerstine Rose Anderson’s touching wake-up call “I Know Things Now,” Jeremy Peter Johnson’s and Royer Backus’s poignant paean to emotional suffering “Agony,” Rachael Warren’s troubling either/or consideration “Moments in the Woods,” and, of course, the musical’s inevitable show-stopper, “Last Midnight,” sung with nightclub zest by Miriam A. Laube. But everyone in this production succeed well in taking the audience through the dark gnarls of woodland and out again into the safety of Sondheim’s conforming vision of reality, where parents are warned about the stories and words they tell to their children—including, presumably, the tale we’ve just experienced. 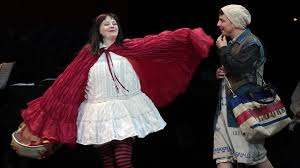 Given all the dark elements of this work and its complexity of plot I winced at the idea of Rob Marshall’s upcoming film rendition. I’d seen his nervously–hyperventilated version of Chicago his disastrously over-the-top retelling of Nine, and I got scared, very scared of what he might do to Lapine’s and Sondheim’s gem. And then, there was the even-more frightening specter of the film’s producer, the Disney studios! As Howard expressed it, at best we might see the tamed-down version that Lapine and Sondheim had approved for high-school productions.

What a surprise, accordingly, to find a nearly intact and, in many ways, superior-to-the-play movie in a nearby theater. Sondheim musicals generally dispense with dance (one of Marshall’s downfalls in Chicago), and, accordingly, he could concentrate this time in bringing a story that suffers on the stage as characters go rushing in and off into the theater wings. With movie-camera mobility, Marhsall maneuvers his characters in tête-à-tête-like encounters as the neighbors go scurrying through the forest. Some critics have understandably criticized this approach as isolating the musical’s increasingly socialized figures, and certainly this does have an effect on the second act when the quartet of survivors are forced to work together in order to rid their world of a female giant; but Marshall’s clearer delineation of the character encounters with one another also help to make Lapine’s tale clearer, and brings greater focus upon each one of these fairytale figure’s psychological desires and failures.

To devotees of this musical, which even after just having seen it, I had already become, it is always disappointing, moreover, to find that some of the songs of missing, including reprises such as the two Princes’ mocking love-stricken duo, “Agony.” And I agree with some observers that cutting important songs such as “No More,” in which the Mysterious Man (the Baker’s long-dead father), sympathizing with the Baker’s determination to escape from the wood (with lovely admissions such as “We disappoint, / We leave a mess, / We die but we don’t”) makes the Baker’s decision to return to his friends and new family somewhat inexplicable. But one has simply to expect those treasured absences given the genre of cinema musicals.

I was less able to forgive the sanitizing of the Baker’s Wife’s tryst with the Prince in the forest. The Disney film leaves us with the impression that the “dangers” she has discovered  which bring her to suddenly comprehend it’s time to leave the woods has consisted of only a few kisses, instead of, as the play demonstrates, a full-out, old-fashioned fuck. And accordingly, her wondrous song after (excellently realized by Emily Blunt) does not make a lot of sense. 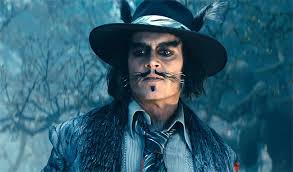 But, again, if that minor concession allowed the rest of the film to remain intact, I can live with it. The performances (made more important in the close-up attention of the camera) and singing were uniformly excellent. As the wolf, Johnny Depp was wily, suave, and lascivious in just the right amounts. Okay, his witty lines (“Think of that scrumptious carnality / Twice in one day…/ There’s no possible way / To describe what you feel / When you’re talking to your meal.”) didn’t get the giggles it surely did on Broadway. I’d still argue they were well sung. And the movie did even better with songs that got somewhat lost in the busy run-arounds of the stage. By slowing down and focusing on Anna Kendrik’s (as Cindrella) perplexing contradictory desires to run and remain in “On the Steps of the Palace,” we suddenly were able to comprehend and enjoy that lovely ballad. The young Daniel Huttlestone (as Jack) truly made us feel that there were suddenly “Giants in the Sky.”  The handsome, self-preening princes (Chris Pine and Billy Magnussen) capably sang of their agonies while sporting about in a waterfall. And Rapunzel (Mackenzie Mauzy) tossed out her golden chords along with her flaxen hair quite glowingly. 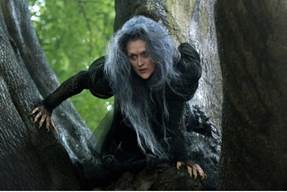 My only criticism of the star of the show, Meryl Streep as the Witch (an actress about whom, I admit, I have often sounded like an old curmudgeon), was that she played her part, even when singing, just a bit too well: in her gently sung “Stay with Me,” Streep growled out some darker tones in a manner that Bernadette Peters might never have imagined. I wanted to more clearly hear Streep’s expressive coloratura, which has been denied us far too long—except for a few quick ditties in Robert Altman’s A Prairie Home Companion and some saccharine standards in Phyllida Lloyd’s Mamma Mia!. But Streep made up for it with a full-throttle rendition of “Last Midnight” and an offstage, show-worthy voicing of “Children Will Listen.” Like Dickens’ Oliver, I simply wanted “some more.”

Sure, the movie version of Into the Woods was not perfect…but as I said above I can’t imagine any production of the musical-comedy equivalent of King Lear to ever be everything it aspires to. There’s way too many fascinating characters, too many plot possibilities, and far too many cleverly rhymed couplings to allow any directorial vision to get just right. That Marshall achieved so much perfection is a kind of miracle in itself. His Into the Woods might, in the end, be one of the best of musical movies—and I’ve seen most of them—on record.

Posted by greenintegerblog at 10:25 AM