At the very beginning of Andrey Zvyagintsev’s remarkable new film, Leviathan, we get a darkened, brooding vision of the Russian Kola Peninsula, which suggests to us, through a number of weather-beaten decaying boats that this former-whaling port has long been on hard times. The major industry, in which the hero’s current companion, Lilya (Elena Lyadova) works, is a fish-packing plant. The ramshackle home of which he glimpse briefly, as an early morning light within illuminates it, is also a rundown, if compfy-looking place, that appears so isolated, particularly as it butts up against the bay, that one can only wonder what kind of folk would want to live there?

That folk, particularly Nikolay (Kolya) (Aleksei Serebrayakov), who has built the house himself, have lived in this spot for generations, and are determined to remain there—despite that the fact that for inexplicably petty reasons, the local mayor, Vadim (Roman Madyanov)—behaving more like a Mafioso figure than a public leader—has done everything in his power to get rid the younger generation of Nikolay, his companion, and his young son, Roma (Sergey Pokhodaev). Although we quickly recognize that the legal system is rigged so that Nikolay has little chance of winning his case, he has, nonetheless, been able to stall the proceedings, and is about to get one last hearing. He leaves his house in the morning to pick up his Moscow lawyer and close friend, Dimitriy (Vladimir Vdovichenkov) at the train station. 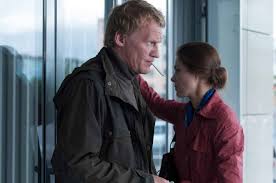 Apparently Dimitriy is a successful lawyer in the capital city, with several higher-up connections through whom he has been able to document the corrupt and obvious murderous actions of Vadim. Vadim, a small-town bully who, despite having his way in local business dealings, is nervous of next year’s elections. A highly superstitious (evidenced by his close friendship with church leaders and regular attendance in church, despite his abuse of all of its tenents) drunk, Vadim would seem to be a man who could be easily toppled, particularly given the evidence of his horrible crimes uncovered by Dimitriy. And, after predictably losing the case once again, it is precisely this tactic which Kolya and Dimitriy take in their attempts to reveal the local corruption. When Nikolay is arrested on a minor infraction at the police station, Dimitriy goes into action, revealing to Vadim the information he has. And after Vadim reacts in near-terror, calling his equally corrupt cohorts to a meeting, one imagines Zyagintsev’s film will be a study in Vadim’s and his associates’ downfall.

In fact, this sensitive movie, which won the 2014 Cannes Film Festival award for best screenplay, portrays a far deeper problem. If the petty dictators of Russian society—along with the more powerful dictators the film mocks when Nikolay’s policeman friends use photographs of previous Russian presidents (Putin is noticeably missing, but is certainly implied in this selection)—are clownish crooks in their crude lies, attacks, and outright murders of their perceived enemies and even those who might question their actions, those who oppose them are often equally drunken fools, are individuals who have lived for so many years living out demeaned lives on the outskirts of society that they are so self-destructive and fearful that even the most outrageously abusive men and women can easily manipulate them. 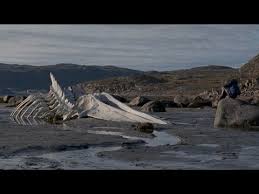 The tragedy of the Leviathans is that even the great giants of the sea were outwitted and destroyed by the puny men surrounding them. So too is the large Russian populace at large unable to survive the petty lies, restrictions, and abuses of their few leaders.


While the close friendship between the wily lawyer and his client should quickly result in a triumphant defeat of the town’s blustering mayor, everything falls apart because of the oppositions’ petty interrelationships. Roma, a young boy with nothing to do and nowhere to go (he spends most of his evenings sitting around a fire in a nearby ruin with his friends, swigging down beer), is resentful of Lilya, who has attempted to replace his recently dead mother. Dimitriy and Lilya, it appears, have long had an intense relationship—which perhaps predated Kolya’s marital relationship with her—which is suddenly reignited upon Dimitriy’s return to the town. Although Kolya is clearly justified in his hatred of the town rulers, he is a hothead who cannot restrain his behavior, making him an easy target for criminal accusations. And in the end, it appears, there is not much difference, in terms of their whoring and drunken violence, between the bullies and those who are bullied by them.

What Zvyagintsev also reveals is that Russian society, perhaps even more than our absurdly over-armed American society, is an extraordinarily violent one. Guns are the rule, even semi-automatic weapons that have no place in regular hunting, and as a policeman, Pasha, hints, everyone is expected to have a weapon. The climatic events which unravel everything occurs within the context of a tense gun-shooting trek, wherein the entire family and friends take a day trip, whose major entertainment consists of proving their expertise in shooting at old portraits of the past Russian tyrants.


The real reason for the day trip, possibly, is to provide yet another occasion to drink. The central activity of these figures, in fact, appears to be swigging down glasses (and sometimes whole bottles) of vodka as quickly as possible, with only cigarette breaks in between. It is, indeed, a central Russian pastime which I have witnessed firsthand (see My Year 2000). And it is, ultimately, what helps to turn their justifiable rage against their selfish leaders into violent actions against one another. When the young boys discover Dimitriy and Lilya making love in a nearby isolated spot, Dimitriy turns on one of the boys, an act which, when reported by another child, leads Kolya to violently react, as he beats Dimitriy and shames his wife.
Those actions, in turn, have serious ramifications. Vadim, kidnapping Dimitriy, has his thugs beat him and engage in his mock murder to scare him off. The scare works, in part, because Dimitriy is not the brave man he may pretend to be—after all, his has a family back in Moscow who are no threatened by his acts; but, just as importantly, he no longer has a reason to stay, having destroyed his friendship with Kolya, and losing Lilya, who has returned to her dead-end current relationship.
More importantly, the entire situation sets up the remaining figures for a series of further lies, intimidation, and destruction as Vadim orders Lilya killed and charges her husband for her murder. Even Kolya’s policeman friends, who know better, are implicated in Vadim’s corruption in their admission that Kolya had threatened to kill Lilya. Roma, who has lashed out against her one morning, has sent his would-be new mother pondering her future to the isolated spot where she is slaughtered. In this world it is easy to pin murder on a man who has spent the several days after his lover goes missing in a drunken haze of self-pity.
Subtly, and—given Putin’s current manipulation of truth with the promulgation of a series of determined distortions of reality, outright lies, and skillful mythmaking—amazingly, Zvyagintsev’s film reveals how the corrupt Russian government (like the Soviet system before it) works with the Russian Orthodox Church and numerous other tutelary systems to keep the people from even imagining what any truth might look like. But then, so Leviathan suggests, the people themselves help to assure their own blindness through the erratically independent, violent, alcoholic-fueled rage in which they stumble through life.
Yes, we in the U.S. are often equally misled by our various government leaders, are often confused as to what might constitute the truth. But the differences are notable. If in our country the corrupt most often bribe the police to dissuade them from doing their jobs, paying them to “look the other way,” in Russia, it appears, you have to bribe the police to do their jobs. But then, the system of justice, in Zvyagintsev’s world seems to be owned by the corrupt themselves. So all hope becomes a kind of delusion. Is it any wonder that yet another swallow of Vodka goes down so smoothly? It tastes better than the real truth—whatever one might imagine that as being.