the broken torso
by Douglas Messerli
Hans Kräly and Ernst Lubistch (screenplay, based on the fiction by E. T. A. Hoffmann), Ernst Lubitsch Die Puppe (The Doll) / 1919 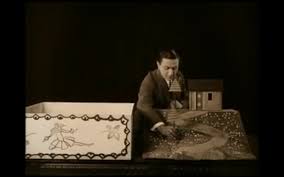 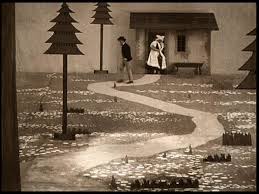 Although Ernst Lubitsch’s Berlin-period 1919 silent film Die Puppe (The Doll) centers upon a dollmaker and the doll, resembling his daughter Ossi, he creates, the film is not truly about a doll, but about human beings behaving like the robotized figures of science and fantasy fiction. The director not only makes this clear from the very first sequence in the film, wherein Lubistch, performing as the film’s creator or director, carefully unpacks and positions his wooden dolls and doll-like set which, in a flick of the eye, turn into “real” human beings, Lancelot (played by Hermann Thimig) and his over-powering and emasculating mother,  walking down the same artificed scene which, through Lubitsch’s use of stylized, flat sets, theatrical  costumes, and exaggerated acting styles, reminds us throughout the film that his characters are nothing more than fictions, puppets that have as much to do with our own lives as Punch and Judy; yet this very objectification of his film’s figures, forces us, like the singing emblems in Brecht’s and Weill’s musicals, to recognize in them elements of our own behavior, for better or worse. If we laugh and, occasionally, cry over Lubitsch’s doll-like marionettes, we also perceive them as representing our very human aspirations and failures.


The director’s central character, Lancelot, is anything but the handsome knight of medieval gallantry; this white knight is a frizzy-haired bachelor (of the unmarrying kind, read homosexual) who is obviously a misogynist (a fact made even more evident soon after through the doll-maker’s add) who refuses to follow his uncle’s, the Baron von Chanterelle’s (Max Kronert) command to marry. And a great deal of the early part of the movie is given over to his attempt to flee from the forty women chasing after him in an attempt to win his hand. Just why the Baron himself, who wishes to maintain his patriarchal lineage, has chosen not to marry, is left purposely vague, but it is clear that his man-servant (who spends most of time “reenergizing” the Baron with spoonfuls of medicine) is at the center of his life, much like Lancelot is beholden to his monstrous mother. Indeed, later in the film, we observe—in a significant silhouette encounter between of the two, the man-servant undressing his master.
So determined is Lancelot to escape womankind, that he willfully is determined to enter a cloister of monks, even if it means suffering a deprivation of food. In fact, the monastery to which he has escaped is filled with avaricious monks desperate to fill their ravenous appetites for pork knuckles. Lancelot is happy just to be the company of fellow men, even if they put him to work as a scullery boy. A chance encounter with a newspaper notice in which the Baron advertises his willingness to pay the boy a huge sum of money if only he returns home to marry, revitalizes the monastery men.


Desperate to fill their stomachs, the head father and his congregation conjure up the perfect lie: Lancelot will marry not a real woman, but a doll, created by the noted dollmaker Hilarius (Victor Johnson), in order to trick his uncle and win the dowry for their gluttonous purposes.


It just so happens that Hilarious is putting the final touches on his new creation, a doll that perfectly resembles is beloved but troublesome daughter, Ossi. Even getting her to smile is nearly impossible; only Hilarious’ 15 year-old apprentice (Gerhard Ritterband) is able to do so, by tickling her chin, proving he is the most openly heterosexual womanizer of the world which he inhabits, later flirting not only with Ossi and her doll-like double, but with Ossi’s mother.


None of the indecorous other dolls in Hilarious’ stock pleases the finicky Lancelot, but Ossi seems just perfect. The only problem is that, in his backroom frolicking with the doll, the apprentice has broken the arm off of the doll-version of Ossi, leaving her in a position not so very different from the limbless torsos of the German artist Hans Bellmer’s 1930s dolls. Ossi herself stands in for her robotic creation, and, unknown to her father, is sold to the anxious new customer.


When Hilarious is finally told the truth, a long scene is devoted to his chasing the apprentice before the 15-year-old boy threatens to throw himself from the window, which we suddenly perceive is on the ground floor and from which steps into temporary safety.
What follows is a series of silly but delightful sight gags as the “wound-up” doll, eats, dances, and even flirts behind her new husband’s back, while he carries his well-behaved doll wife home to the monastery to live happily ever after, particularly when the brothers determine to throw the doll into their junk room and throw away the key.
The well-known actress Ossi Oswalda, however, further tricks her would-be keeper by momentarily bringing new life to the elderly monks, and suddenly making an appearance in her husband’s cell, irritated when he blinds her to his own nakedness with a hat thrown over her eyes, as he undresses for bed. But by the time he pulls the covers over his body, he has somehow—and quite inexplicably—been transformed from a would-be bachelor to a man who now dreams of his loved one coming to him in his sleep. He awakens from his dreams to find his doll-wife girl sitting at his head, when suddenly realizes—again without explanation—that she is a real girl, proven by the fact that she is frightened by a mouse! And the two, now ready to consummate their marriage, escape by climbing over the cloister walls to encounter the still outraged father, soon mollified by Lancelot’s presentation of their marriage certificate.


We can only imagine what lies ahead for the former woman-hater regarding his relations with the clearly naughty and indecorous Ossi, but the director hints at his possible travails when Ossi’s father admits he is overjoyed to finally have her “off his hands.”


In short, if Ossi has brought the former mamma’s boy to life, we now recognize that his fears of marrying may have been more than justified. So are we all deluded in life when what seems to be only a fantasy (an image of reality) becomes the real thing. Life is always so much more disappointing that art; the doll surely is preferable to the tongue-wagging wife. But then, also, Lancelot surely will be provided with a great many opportunities, like a puppet on a string, to laugh it up and dance. Yet, we cannot help but fear that the real girl might one day end up like her doll look-alike, a broken torso that no one can never quite perfectly put back together again.