The question, “What if one day….?” seems to dominate Maddin’s remarkable docu-fantasia: the artist considering not only “what if” he might be able to actually leave his hometown, but if he might be able to leave the memories—pleasant and nightmarish—visions, and obsessions behind. Blanketed by deep snow through many months of each year, his Winnipeg, one of the coldest cities on the continent (the narrator claims Winnipeg to be the coldest city in the world, but, in fact, it does not come near the icy temperatures of Yellowknife, Canada, nor colder cities in Sweden, Russia, Mongolia, and, obviously, Antarctica) is appropriately described as a world of sleepwalkers, metaphorically expressing that quality by insisting that city laws declare that owners can keep the keys to their previous homes, whose occupants must open their doors to them when they suddenly appear. Mythologically pulled in by the deep currents running under the waters where the city’s major rivers, the Red and Assiniboine, fork, the city’s citizens, so Maddin declares, cannot escape, but are trapped within their growing tunnels of now, traveling not only the city’s major roads but a world of secret backstreets not even on the map, a dual system of driveways split up by the two major Winnipeg taxi companies. 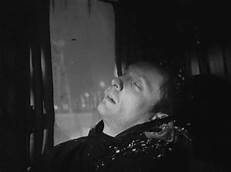 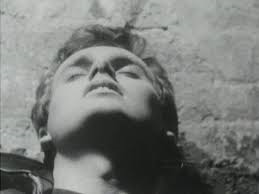 Throughout much of this early “documentation” Maddin focuses on sleepy travelers—particularly the actor who plays him, Darcy Fehr—who seem unable to awaken themselves. In an often fanciful but, nonetheless, illuminating introduction to the new Criterion edition of Maddin’s film, Wayne Koestenbaum declares that this train-obsessed film uses the locomotive as a symbol of the cinematic apparatus, a kind of loop tape that connects it with all the trains of the 20th century, including the nightmarish rides of the Jews to concentration camps of World War II represented in Claude Lanzmann’s Soah, while also calling up Andy Warhol’s “fixed-camera vision of a fellated man’s ecstatic face” in his Blow Job which resembles, at times, Fehr’s image as reflected in the constantly shifting light. If this duality seems, at first, more than a little irreverent in its comparisons between the extermination of a race with moments of ecstatic sex, there is, nonetheless, an element truth to Kostenbaum’s assertions. For Maddin’s film—while not truly concerned with the extermination of a race—is interested in the possible death of people who cannot escape their own pasts, connecting it, in numerous ways with both sexual and spiritual rapture, the kind of rapture also found in films themselves, which results often in a trance-like, stoporus state of being. The only way to escape this condition, Maddin as narrator argues, is to go back and explore life itself through a dissection of the film, to replay the loop by recreating its intermittent cuts which can perhaps release him, his fellow citizens, and us from its deadly charm.

Maddin’s My Winnipeg, accordingly, is itself an irreverent voyage back through memory, combining private life with public, family with the community as a whole with threads that are both factual and fantastical, realities that are public combined with those of the imagination. Accordingly, Maddin’s loop tape not only takes him back to his white cube of a house, where he reenacts specific dramatic scenes from his childhood, including his mother’s accusations of his sister for her presumed sexual behavior, the elder’s self-centric and domineering relationships with her family (she, like the actress, Ann Savage, who portrays her, is a melodramatic figure), and, ultimately, her refusal to even participate in family life. She lives a life on the edge, just as in the series in which she has supposedly starred for 50 years, “Ledge Man." 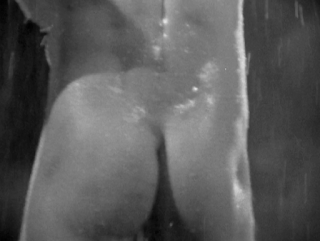 The director interleaves these moments, moreover, with representations of city history, including the public leaders’ pattern of destroying what he perceives as popular monuments to civic history, particularly those related to athletics—another way of trying to wipe-out reality. These destroyed institutions, particularly the destruction of the Winnipeg Arena, are connected with the narrator’s father and his own heterosexuality, since the elder, at least in the confines of this film, was involved with the famed hockey team who played there, and Maddin, so he claims, was born in the building. Like a territorially defined jock, he pisses in the urinal minutes before the building is brought down by dynamite—one of the film’s “true” events, according to the accompanying DVD copy. The mythical “Black Tuesdays” hockey team—made up of famous players now in their 60s, 70s, and 80s—link him, in this manner, personally with his “male”-centered past. 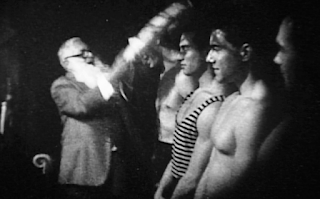 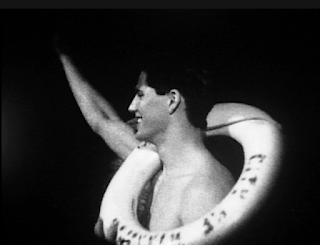 Against these normative (if homoerotic) patterns of his memory, Maddin posits a series of “abnormalities,” generally connected with compulsive behavior, religiosity, and perverse sexuality such as the documentation of civic leader’s attraction to spiritualism (factually, Arthur Conan Doyle did travel to Winnipeg in an attempt to convert its citizens to cause of Spiritualism) and in the mythical tale of a Winnipeg mayor of the 1940s and 1950s (named Francis Evans Cornish, actually the city’s first mayor who served in 1874) who allegedly judged the all-male “Golden Boy” contests—a kind of local beauty pageant in which the most beautiful male, based on his physique and general appearance—held in the famed Paddlemill Restaurant atop the Hudson Bay Company Building (a real restaurant and building, but a fantasy contest), which, our narrator reports, resulted in a scandal when it was discovered that many of the contest’s former winners appeared on the government payrolls.

Connected to these two forks that move away from the normative behavior of Winnepegans, are the legendary forces running below the deep forks of the city’s rivers themselves and the tale of two homosexually-inclined bison, who, in a mad sexual frenzy, led a herd of their kind to destroy the city’s amusement park, Happyland (the park, real, closed in 1922, the bison representing, clearly, something like a traumatized childhood memory). Another such tale involves the burning of city’s racetrack (a real event) which, in Maddin’s dark work, ends symbolically in the track’s horses attempting to escape and rushing into the freezing rivers from which, for that entire winter, their heads protruded, revealing the anguish in which they died, reminding us, again, of the citizens without the possibility of escape.

In other words, in Maddin’s black comedy version of his beloved-hated hometown, sex and death, ecstasy and destruction are interminably combined; and these two are linked even closer to the images suggested by Kostenbaum’s opposing cinematic friezes observed in Blow Job and Soah.

Finally. in the events surrounding a real World War II dramatization of a speculation (“What if…Hitler were to invade take over our city?”) everything is linked up within the film’s speculative and disjunctive structure. Through the perversity of the city fathers, Nazis, in the form of acting and costumed soldiers and officers, overtake the city, issue edicts, and potentially terrorize the sleepwalkers in an attempt, apparently, to bring them to their senses. The citizens of Winnipeg and the surrounding areas financially paid for these events: during the so-called “If-day” and the weeks following 45 million dollars through the purchase of Victory Bonds. Yet what wonders what those citizens, particularly their children, actually learned or even thought about these dramatized tableaus. Did they viscerally share, if only temporarily and empathetically, the fears and horrors of those the Nazis had conquered and despised? Or was it simply an amusement, another day in Happyland or a day at the Public Baths—beneath which Maddin magically adds two levels lying below the family friendly pool, worlds divided, once again, by sex, girls, and boys, wherein, at least in the lowest level, gangs of naked, hairless children raced about in a kind of sexual ecstasy?  Just as poet Hart Crane asked of Edgar Allan Poe, in his locomotive-like voyage by subway beneath the East River on his way home to Brooklyn in his long poem The Bridge, did the poet remain awake or sleep for the remainder of his voyage, was he drunk or sober at the time of his death in a polling house tavern? so does Maddin ask similar questions of his fellow Winnepegans.

No one can sufficiently answer these questions, and, accordingly, Maddin is not easily freed from the intense ties he has with the past. Like most of his compatriots he may be forced to emotionally and mentally remain where he began, a dead-man-walking without the vision for a new life. His solution is to create a new pin-up, cartoon-like figure, Citizen Girl, the heroine of the 1919 worker’s newspaper The Citizen. In short, he leaves it in the hands of the brave Winnipeg citizens of the past, those who created the city not simply by ordering it up or paying for its construction but through the hard work of their bodies. Neither imagination (or lack of it) nor even art can create (or recreate) a city; only those who “build it” (sexually and spiritual) and die within it can do that. A reimagining, as expressed in My Winnipeg, is just that—a personal dream of a homeland. The real thing (whatever we perceive that to be) sits still on the prairie, rising out of steel, rust, and glass, allowing one to safely travel, after all, away from it on a voyage to the rest of one’s life.