Raoul Walsh | They Died with Their Boots On

Until the last couple of decades, it is well to remember, no one in their right mind would have thought to remind Hollywood filmmakers that their films should “speak the truth.” Like the early American newspapers, each film contained its own version of reality based on the principles and intentions of its creators. Raoul Walsh was, in fact, one of the most adventurous of early 20th century Hollywood directors, in his youth contemplating a career as a sailor before learning to ride and rope steers, being involved in a scandalous relationship with a mistress of a Mexican general, and traveling to Montana with a trainload of horses. 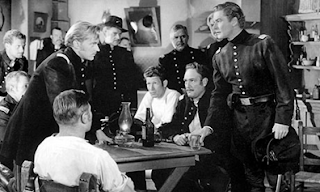 And when he came to be involved with cinema, his works such as The Thief of Bagdad, Sadie Thomas, and The Loves of Carmen, mostly dealt with a series of romantic and/or swashbuckling adventures, ladled out, as in the case of his The Bowery, with heavy spoonfuls of sentiment. Yet he could also present battle scenes—as in one of his greatest works, What Price Glory?—with an enormous sense of realism. In 1941 alone Walsh served up nostalgic sentiment in The Strawberry Blonde (with James Cagney), a high tension marital battle in Manpower (with George Raft, Edward G. Robinson and Marlene Dietrich), a disillusioned gangster film in High Sierra (with Ida Lupino and Humphrey Bogart), and an dashingly heroic send-up of George Armstrong Custer (with the always flamboyant Errol Flynn).
The latter film has little to do with reality. Yes, Flynn as Custer is presented in his early West Point days, quite accurately, as a vainglorious, self-enchanted, prankster who graduated the very last in his class; but once he gets to Washington during the early days of the Civil War, all attempts at accuracy are thrown away, as the young, handsome poseur immediately sweeps his future wife, Elizabeth Bacon (Olivia de Havilland), off her feet, wins over the affections of General Winfield Scott (wonderfully played by Sydney Greenstreet) with a dish of boiled onions, and plots to visit his beloved girlfriend with the willing allay of her maid (Hattie McDaniel, far more clever and  independently-minded here that down in the plantation at Tara).
While Custer is still presented as a braggart, a liar, and a publicity-seeking manipulator of the bungling militarists around him, he is also loveable, blustering, hero who only Flynn can properly convey. We love him for his mad rushes into harm’s way. My only wish is that Walsh might have actually portrayed a true event from the Custer history, that when then captain Custer overheard his commander, about to cross the Chickahominy River, mutter “I wish I knew how deep it is,” the captain rushed into the middle of the stream, shouting out “That’s how deep it is, Mr. General!”
In the film, unlike in reality, Custer is made Brigadier General quite by accident—a bit like the invitation of the incompetent actor Hrundi V. Bakshi is invited to The Party—when a secretary is asked list down Custer for reprimand, and his name is mistakenly attached to another command to reassign the soldier to the position of General. Of course, he wins the battle and is there with Grant (with whom he would later do political battle) at Lee’s surrender at Appomattox.
Apparently, the real Custer did fall into a sort of drunken idleness back in civilian life, and was saved by his reassignment to the military—in the film through the intervention of his wife.


In They Died with their Boots On, Walsh suddenly burnishes up Custer’s reputation through his abilities to transform a group of drunken rowdies he finds at the Dakota Territory outpost into a sober band of compatriots who march forth into battles singing the Irish ditty “Garyowen.” Although he defeats the Dakota leader Crazy Horse (performed with howlingly garbled English syntax by Anthony Quinn), he is portrayed as a supporter of the Indian demand that the Black Hills, a world sacred to them, be spared from White habitation, a reality the screenwriters might have cooked up on the basis that the real Custer had had a child with the Cheyenne squaw Mo-nah-se-tah, daughter of Little Rock.


The evil-doers in this delightful fabrication are the same men—including Custer’s nemesis from West Point, Ned Sharp (Arthur Kennedy)—who had previously attempted to entice him to lend his name to their crooked attempts to bring trains, guns, liquor, and other bad habits into the wild west. Forget the fact that, in “real” life, it was Custer himself who spread the prevarication that gold had been discovered in the Black Hills, which brought thousands of speculators and would-be miners to the “sacred” land. In this fiction, Custer is outraged by the lie spread by these same evil men, and returns to Washington to report to the authorities about their evil-doings; as one might expect, the congressional committee finds no reason to believe him, and Custer is forced to return home, destined alas to fight a war of all the area Indian tribes gathered together to their last stand in the Battle of Little Big Horn.
Custer’s determination to do his duty, while knowing the odds against him, allows the filmmakers to create a lovely and touching scene of marital love between Havilland and Flynn, with composter Max Steiner tuning up his violins enough to bring tears to our eyes. The men march forward with “Garyowen” to fight a battle of hell and glory as exciting as only Walsh could create. For revenge Custer kidnaps his arch-enemy Ned Sharp, forcing him to join in the doomed battle. In the actual filming, several of extras the director used were unable to ride a horse or even stay on one; one fell and broke his neck. Another extra, insisting he carry a real sabre into the fray, fell to impale himself.  A stuntman died of a heart attack.
If Custer and his soldiers, just as in real life, all die in this testimony to a more romantic reality, it is difficult even today—while I watched the movie on Turner Movie Classics—not to applaud, just the audiences surely did in 1941, when the film became one of the top-grossing movies of the year.