Ingmar Bergman (writer and director) Höstsonaten (Autumn Sonata) / 1978
As Farran Smith Nehme writes, in connection with the Criterion publication of the DVD of Ingmar Bergman’s Autumn Sonata, this film very much belongs to the tradition of mother-daughter film encounters, such as Mary Astor in The Great Lie, Bette Davis in Mr. Skeffington, and Lana Turner in Imitation of Life. In each of these cases the mother, prefers a career over attending, loving, and caring for their daughters. Of course, in my respects, it is an issue that is very much involved with pre-feminist notions of motherhood, in which women were presented as beings whose proper role was the nurturing of their children rather than pursuing a career, to say nothing, of, in each of these instances, gallivanting across continents in such of intellectual and sensual fulfillment. Certainly, it must have been painful, in Ingrid Bergman’s instance, playing the mother Charlotte—whom, when she abandoned her marriage and family for the love of Italian director Roberto Rossellini, had been characterized as a unfit mother, her film career destroyed for several years in the US—as well as for Liv Ullmann, here playing the daughter Eva—who, having married Bergman, had also chosen a busy career over motherhood, her own daughter playing her as a child in the film. It was to be Ingrid’s last role, and one of her only Swedish language films of her later career. 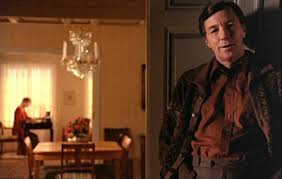 The director himself, at the time of the filming, had abandoned his home in Sweden because of accusations of tax evasion, and shot Autumn Sonata in Norway. It would also be his last film for cinema; the rest of his works would be made for television.


In short, it was surely a difficult time for all involved. We do know that both Bergman’s fought over Charlotte’s characterization. Ingrid had planned out her lines and dramatic actions carefully beforehand, presumably so that she might render some warmth and compassion for the vilified mother, actions which Ingmar felt were far too studied and traditionally studio-bound. Ingrid clearly felt that the character she was being asked to play was a kind of monster.
To give all credit, however, Ingrid does not at all come across as the horribly selfish figures presented in any of the movies above. First of all, she is recognized as a glittering force of energy, a radiant pianist of international renown in whose presence the daughter, as a child and adult, longs to be. If we can hardly excuse the fact that Charlotte has not bothered to visit her daughter for 7 years, has had the other daughter, Helena—suffering from a degenerate disease—put away to a care facility where she has not bothered to visit her, and, as we later grow to perceive, often made it apparent that she was unable to show love to her family, including her husband, who she left for periods to live with other men, we also are made palpably to feel the excitement and grace of her presence. In the carefully appointed, comfy, but slightly cramped home of Eva and her church minister husband, she is like a beautiful lioness caged up in cutesy Behaglichkeit.
We comprehend almost immediately why Eva may have wanted to be in her mother’s presence once again, and even realize how guilt has forced Charlotte to accept the invitation to visit after the death of her long-time companion Leonardo; but it is preposterous to think that either of these women might have expected to achieve anything in the encounter except the opening of old wounds.
Eva, it is apparent, has grown into a strong a skillful opponent in the time she has lived apart from her mother. Although she still perceives herself as the quiet, slightly awkward and unattractive girl of her childhood, she has (despite her dowdy dresses, old-fashioned hairdos, and unattractive glasses forced upon Ullmann to mask her true beauty) become a fiercesome, if outwardly unfeeling being, as her husband attempts to warn us directly in the very first scene. Like her mother, she believes herself incapable of love. Yet she has taken in her sister and has been lovingly caring for her. The entire house and its contents speak of her loving attention. And, while her mother clearly has no interest in her activities, it is apparent that she is beloved by the local community as she plays the piano at local concerts and in church.


Like many a Ingmar Bergman film, the ghosts come out at night; and this film, although the two  spar in little ways before the big event, they outwardly pretend a great affection. The most notable exception is truly revelatory. Having finished dinner, Charlotte asks Eva to play. The performance of Chopin’s Prelude 2a which she selects is tentative, discordant (perhaps even with a few wrong notes), and, at moments, truly suspenseful, as we fear she may not have the nerve to proceed under the critical eye of her mother; but it is unquestionably a beautiful interpretation. The same piece, played by Charlotte a few moments later, is surely more polished, more carefully nuanced, professionally assured. But it lacks precisely what the mother accuses Eva’s rendition of having too much of, sentiment (or as Charlotte diminishes it, “sentimentality”). In short, even though the mother has presumably again bested her daughter, it is apparent to the sensitive viewer that the amateur daughter, in some respects, may be a better “player” at life than the professional mother.
If we didn’t perceive that previously, the painful night-time encounter reveals Eva’s strength, as she again and again inserts the verbal knife into her mother’s elderly fame. Clearly Charlotte deserves the attacks: she is a selfish woman, who admits that her parents never bothered to touch her, and that she, despite her outward statements and expressions of love, could never bring herself to actually feel for those around her. Charlotte has been a monster, and to Eva’s way of thinking, has not only infected her own life so that she has failed to fully love but has been directly responsible for Helena’s illness, an accusation she supports with a scene in which Helena, in the early stages of the disease, suddenly appeared to be cured through the innocently loving attentions of Leonardo for her, before seriously relapsing after Charlotte has insisted that Leonardo join her in the abandonment of the two girls. That dramatic leave-taking may certainly have helped to precipitate Helena’s decline, but, clearly, it has not caused the illness nor would Leonardo’s remaining for a few more days have ultimately prevented it. It is a delusion on Eva’s part, as are her own feelings of insecurity.
Perhaps Eva has so seriously attacked her mother because she has expected the older woman to expertly defend herself, to obliterate her childhood perceptions of reality as being mere illusions. But this time around, Charlotte does not even truly attempt to argue against Eva’s accusations; she is merely astounded by the depth of her hatred, and choosing to repeat her lifelong pattern whenever she is faced with the truth, once again escapes, as Eva puts it, like a bird who has been trapped.


Both women now know that there can be no true reconciliation. Yet Eva gradually comes to perceive that she is the stronger, for she will continue to hope that their might one day be a true forgiveness, writing to her mother, once again, to tell her of her hopes. It is that “hope” which separates Eva from Charlotte. The mother may be a sophisticate, able to shift languages in an instant, capable of outwardly charming all the men whom she encounters, and to enchant her every audience; but, unlike her daughter, she lives without the ability to hope for a true transformation. Her “love” is an empty one, her joys a mere covering like the beautiful clothing she so proudly wears.
Unlike Charlotte, Eva can comprehend Helena’s incomprehensible language; Eva openly expresses love, despite her feelings that she cannot. The son she and her husband have lost at an early age, remains with her, despite his death; he continues to live on through her presence—the closest thing one can imagine to eternal life.
If  director Bergman’s Autumn Sonata, accordingly, is a work of seeming failure and abandonment, an artful presentation of life coming to a close, it is, nonetheless, also a film about faith and possibility, of joyful renewal and hope.