The crudely conceived, rough-cut, home-made quality of these gay and lesbian movies from 1989-2001, attempt in their audacious characterizations and their outré behavior to satirize, challenge, and explore sexual identity. Not all of them succeed. 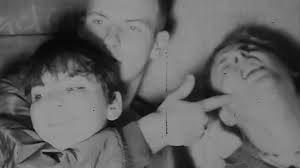 
Far more campy and wittily self-aware, Jill Reiter’s The Birthday Party (1994) depicts a sixteen year old girl celebrating her birthday with her only two friends, one a Jehovah’s Witnesses proselytizer and the other described as “a precocious slut.” Presumably the 16-year old lesbian girl can find no other friends, for which her “mother,” a hippie played by a drag queen compensates by requiring her boyfriend to lasciviously deliver up a birthday cake while a male dancer and female sex worker entertain them. Shot just like the 1960s homemade films, in faded out colors, the film takes family life by the balls, overturning any presumably “normal” conventions and forcing us to reconsider the whole concept of motherly and fatherly love.
Perhaps the most disturbing and truly conceptual of these films is Scott Treleaven’s The Salivation Army of 2001, which documents the director’s and his friends fascination with outsider images of blood, sex, spit, and cult life. These images, he suggests, are always appealing to the young who feel separated from the world around them; and suddenly, through the early violent images of the film, we cannot help but make connections with some of today’s youth who, imexplicably to most, become attracted to murderous armies such as those of ISIS.


To promote their counterculture “gang,” Treleaven and his friends develop a zine, featuring events of mock violence and a blood exchange between members. One young “recruit,” however demands that they truly beat and rape him, which they somewhat unwillingly agree too, filming the images. Suddenly, their popularity not only increases but they begin to receive messages and films from others who take their violence seriously, apparently doing actual harm to their recruits, some of whose members seem determined to take their “mock” cult into true cult territory. The group, which have determined to have no coherent manifesto nor dogma for their acts, were suddenly faced with a dangerous usurpation of their purposely amorphous activities and beliefs. Faced with the brutality they have accidently bred, they are forced to close their zine and disband. And the film itself is transformed into a kind of shamed confessional, helping to make The Salivation Army a far more important document than the others included in this program.


The most outrageous of these films, however, is Rick Castro’s “Dr. Chris Teen Sex Surrogate,” the third part of his Three Faces of Women—a kind of camp deconstruction of Joanne Woodward’s Three Faces of Eve. This portion of the triptych from 1994 features Fonda LaBruce and Vaginal Davis as two drag queen lesbians whose sex life has gone missing. Without telling David, LaBruce has called in Dr. Chris Teen, a sex therapist, to reenergize their love, which Dr. Chris proceeds to do with the introduction of several large dildos, foot-kissing fetish activities, and slightly sadist aggressions. Not only does it seem to work, but the hilarious, pyscho-babbling, cliché-spouting Dr. Chris joins them in bed. In an after-event discussion, Castro commented that in 1994, when the film was shot in Manhattan by the famed porn director, Bob Alvarez, they were attempting to take identity in directions which had never before been conceived, but which, today, have become quite ordinary.
Greta Snider’s Our Gay Brothers (1993), finally, takes found film footage from porn movies, children’s instructional films, and sports scenes while various gay men express their opinions about the opposite sex. Many of these are, predictably, favorable, but an increasing number of their comments begin to build up a huge chasm of hostility gays and women, as words such as “fish,” “sticky,” “flabby,” etc. etc. begin to crackle through the air, while Snider closes out the film with a recurring image, reversed in direction and pattern, of a woman swimmer diving through mid-air that seems to contradict almost all the negative assertions that are being expressed.
Surely contemporary theorists on gender and queer studies will make enormous claims for these independent experiments. But, unfortunately, they remain too raw, poorly conceived, and  anti-intellectual to truly challenge our cultural thinking. At the most they are titillating caricatures that suggest directions rather than thoroughly exploring them.