thanks for the memories
by Douglas Messerli

Charles Bennett and Ian Hay (screenplay and dialogue, based on a novel by John Buchan), Alfred Hitchcock The 39 Steps / 1935 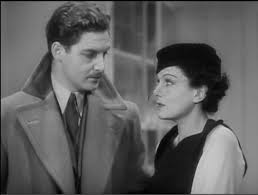 As in so many of later Hitchcock films, his early masterwork of 1935, The 39 Steps, involves spies, mistaken identities, and recalcitrant beautiful women, who nonetheless work with the hero to save the day. Loosely based on a 1915 spy thriller by John Buchan, this film is far more coherent than the original’s series of coincidences (by having the spy Anabella ask for a map of Scotland and circle the Scottish village of Alt-na-Shellach, for example, Hitchcock makes plausible the outrageous coincidence of the original tale, wherein Hannay accidentally stumbles into the ringleader spy’s Scotland mansion), even if, at times the series of events seem somewhat implausible. Perhaps the most inexplicable element of Charles Bennett’s and Ian Hay’s script is simply the fact that Hannay (Robert Donat), who accidentally stumbles into involvement through meeting Anabella Smith (Lucie Mannheim) at a music hall, continues to pursue the foreign (presumably German) spy ring leader (Godfrey Tearle). Even if one can simply slough it off as necessary to prove Hannay’s innocence in murdering Anabella, it doesn’t quite explain why he moves in the very direction of capture rather than escape. But then Hitchcock’s figures are nearly always slightly altruistic and accidental heroes who spend most of the action running directly into the nets they proclaim they want nothing to do with: the societies, authorities, and sexual involvements in which they become entrapped.


In nearly all of Hitchcock’s movies the local police, the military, and even government authorities are nearly inseparable, and often more dangerous in their inabilities to even see the evil surrounding them, than are the criminals and foreign agents whom they have been invested to protect us from. And The 39 Steps it is the so-called “good citizens” of the world that are more dangerous to Hannay—a Canadian outsider—than are the dangerous spies who are out to kill him. In this early film, Hitchcock teases us by taking his character into even more minefields by forcing him, again by complete accident, to participate in a political rally where, in trying to loudly explicate his situation, he becomes a kind of local political hero, and to attempt to prove to a deliciously frigid (and in this case, slightly scatter-brained) blond, Pamela (Madeleine Carroll)—Hitchcock’s favorite kind of woman—that he is the innocent man on the lam. Unlike Eva Marie Saint in North By Northwest, who knows better than Cary Grant that he is an innocent caught up in a vast conspiracy, Pamela is as dense as the societal figures around her, successful in getting Hannay arrested at least two times before she finally learns the truth by overhearing a telephone conversation between the conspirators themselves. But even then, she slows down his pace by several hours and nearly leads him—once more—into capture by trusting the assurances of Scotland Yard.


Although the 39 Steps to which the film refers is the name of the foreign agency which plans to steal secret documents about British airplanes, it might as well describe all the “steps,” the various moves, ploys, and declarations that Hannay has to take and make in order to prove his worthiness as a loyal companion to his would-be lover. Only after Mr. Memory (Wylie Watson) finally gets all his knowledge off his chest, so to speak, does she truly permit the faithful “foreigner” to hold her hand.
Indeed, memory plays an important role in this film, as Hitchcock, somewhat clumsily, reiterates in an early scene, when after discovering a knife in Annabella’s back, several bits of conversation between Hannay and his mysterious night-time visitor a few moments after we have just heard them. It is Hannay’s intuitive memory—the bits of music he can’t get out of his head (an important motif in so many of Hitchcock films), the use of mysterious words such as “the 39 Steps,” and vague image of a man with a missing forefinger—that solves the dilemmas of the central characters and saves the country. But rote memory, on the other hand—the kind of knowledge Mr. Memory puts to work in his music hall routine—is dangerous and destructive, a thing likely to get into the wrong hands or simply be misused.
Had I seen this film before the publication of my 2001 My Year volume, subtitled “Keeping History a Secret,” I might surely have included this film. History as a thing of memory in The 39 Steps is a truly terrifying thing; while history as a force to move forward, is not only something positive, but necessary to regenerate the world. In 1935, when the English might already have perceived that the events of World War I had resulted in a series of new circumstances which would threaten their world, Hitchcock’s lesson in “memory” was not only revelatory, but was prophetic.