a vast canvas of simple profundities
by Douglas Messerli

Chen Kaige (screenplay, based on a fiction by Shi Tiesheng, and director) 邊走邊唱 (Life on a String) / 1991


“It’s hard occasionally to divine the precise meanings of Chen Kaige’s lush, mystical fable….” Geoff Andrew wrote in Time Out up this film’s first showing. Similarly, The New York Times Book Review film critic Janet Maslin described the work as being “cryptic,” and later argued that “The events that occur in Life on a String are not easily described in anything less than the metaphorical terms in which the film maker...has conceived them.” And other critics had an equally difficult time in comprehending the “meaning” of what they recognized as a stunning brilliant visual work.
In fact, the ideas presented in this film are just that: metaphors that rather that point to rather than enumerating profundity. Told by his master that only after he breaks the 1000 string of his instrument will his sight be restored, Chen’s film follows the man, now known as the Saint (Liu Zhongyuan), as he nears that goal. The sanxian-playing Saint now has his own disciple, a young blind boy named Shitou (Huang Lei), who although loyal to his master, is also at the age when his inquisitiveness and sexual yearnings are becoming problems.
In the very first scene we see him temporarily running off from the Saint, inquiring of villagers questions that hint at profundity while actually expressing the simple questions of a boy desiring to understand a world which he cannot imagine: “Why is empty space white?” “Why is the ocean blue?”
In fact, what we perceive in Shitou is a kind of mirror image of how the old blind man has come to be perceived as a saint, challenging the world about him with the sense of the outsider, daring to investigate what seems obvious to all others, and entertaining and calming the warring locals such as the Sun and Lee clans with his sanxian and his metaphorical narratives. He is a saint less because he is wise than because, as an outsider forced to wander this barren world, he has survived. 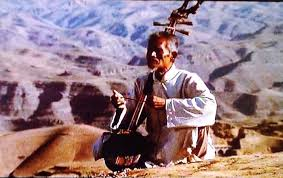 Through Shitou we can imagine him suffering from the human urges, vanities, and confusions of all beings; and through those joys, trials, and tribulations we perceive, at film’s end, that Shitou as well has gained in wisdom, surely destined to become the next generation’s Saint.


Chen’s major metaphor, that we are all forced to follow our lives as if attached to strings—required to play out life, like a game, the best we can—is hardly an original and particularly profound message. The irony that the Saint has mistakenly imagined that the final break of the 1000 string will result in some reward, is the error of all who live in this world imagining that there will be a reward in another after-life. Indeed, Chen seems to suggest, it is this life that truly matters, even if we are unable to embrace its full beauty and horror. The prescription that lines the bottom of his instrument is nonsense, an ancient text incomprehensible to the contemporary pharmacist; and the Saint, like everyone else, is destined to live out his life with the “raw deal” he has been given by fate.
In counterpoint to the rather thin “message” of his film, however, the director uses his remarkable artistry to create a visual landscape filled with original and eccentric figures that displays the complexity of life we often miss in our everyday activities. Chen has been intentionally ironic in allowing his audience to experience an absolutely sensual spectacle that his central characters cannot witness. A bit like a tourist guide, Chen trails his camera over vast hills and mountains, desserts, waterfalls, and plains in which warring families gather to destroy one another.


Chen takes us through the throes of love, as Shitou couples with the beautiful Lanxiu (Xu Qing) who challenges him to become more independent by leading him dangerously close to the vertiginous-producing cliffs of the nearby mountains. And he thrills us with slightly absurdist rituals, as when desiring the cross and impassable river, the Saint is borne by the villagers in a boat carrying him inland instead of to the river, presumably taking him where he desires to go by moving him in another, but safer, direction. Does he know that he is being “tricked,” or is his journey simply another metaphorical statement that has no precise meaning?
At heart, one might almost describe Chen’s film as being a kind of fantasty musical, particularly when the Saint sings his beautiful compositions (with lyrics by Chen and music by Qu Xiaosong). And it is the illogic of many musical librettos that Chen’s film shares.
The real truths, the truly profound ones of this film are, by comparison, small ones, such as the moment the Saint warns his young disciple against women, suggesting that in his youth he suffered great torment and pain. When, soon after, he is furious with Shitou for having had sex with Lanxiu, the boy lashes out “You’re jealous,” for the first time in their relationship the older man strikes the boy. Suddenly we are made to realize the boy is right: the Saint is as human as all others, jealous not only of the boy’s young body that so attracts the girl, but jealous that the young boy might be taken away from him by others in the surrounding world  When, late in the movie, we perceive that in one of her cliff-hanging moments, Lanxiu may actually have fallen to her death, we also comprehend that now, Shitou, like his master, will be made to suffer deep pain and torment on account of love.
At another moment, after the old Saint has realized that he will never regain his sight, he returns to the small eating establishment at the foot of the falls, drinking heavily simply to relieve his sorrow. The beautiful serving woman comes to him, insisting that she drink his last cup of the wine, perhaps to help him to stop or simply to show her kinship with his sorrows. At that moment, both the hero and we simultaneously wonder if there might not also be something else behind her actions, particularly as she pulls his head to her chest in gentle sympathy. As the old man asks her, first, how many years she has worked there, and, then, how many years he, himself, has been coming to the spot, we wonder whether she might not be his daughter, a figure with possibly a deeper connection than simple admiration for her wise visitor. She evades the questions, and Chen goes no further in answering the question he has generated. Yet it is in these kinds of intense, unanswerable emotional puzzles that we are asked explore the significance of life in this film.
The Saint, after all, is still a man, and it is not the grand and profound generalities of life that truly matters, but the simple emotional responses each of us make every day regarding how we live, how he love, and how we die. Upon returning to the small hilltop temple where he and Shitou make their home, the Saint finally dies, without one day of sight, but with an inner vision than most of us might envy. His body is sent down river by boat on another voyage where no one can know how it will end. Shitou packs up, hiding a few coins and paper money within the base of his instrument instead of the meaningless prescription for the restoration of his sight.


As he starts upon his voyage he is met again by Lanxiu’s brothers who have previously beaten him for his attentions to the girl. This time, however, they only grab the lute, shaking it. The first has nothing within it, and they take it from him; it was obviously the Master’s instrument. But the second rings with the coins he placed there, and they return it to him, lifting him into the air in a chair as they carry him forward for a short while. Like the villages near the waterfall celebrated the Saint, these men move Shitou forward on his voyage in a new ritual that will surely result in his one day returning as a wiser man who can help them to see the things to which they are blind.