Donald Petrie | A Raisin in the Sun

Lorraine Hansberry (screenplay, based on her play), Donald Petrie (director) A Raisin in the Sun / 1961

There was a great deal of tension on the Chicago-based set of the film, A Raisin in the Sun in July and August 1960. Although the excellent cast obviously knew their lines and were more than competent and willing to work together—they had, after all, previously performed for months previously in the New York production of the play—but they were working with a  little-known Canadian director, Daniel Petrie. 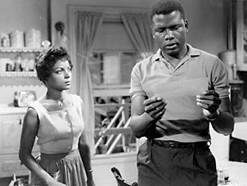 Columbia had paid what they thought was an exorbitant price for the screen rights ($300,000) along with another $50,000 for playwright Lorraine Hansberry to write the screenplay. The budget for the film, however, was a meager $1.5 million, but even that amount seemed outrageously high given the fact that the film wouldn’t sell in the racist South, and would have to gross double that amount, as Donald Egan reports in America’s Film Legacy, to even break even.


Hansberry not only had been told that she “wasn’t allowed to ‘open up’ the original story by setting scenes on location,” white Egan, but that she had to cut almost an hour of the original script, material that she felt set the major actions within social and philosophical issues of the day. Moreover, within that hour of cuts were nearly all the comic moments of a work that, in its attempt to create a Black version of Arthur Miller’s Death of a Salesman, resulted in a work that was even more “miserably realist.”
Although the play had won The New York Drama Critic’s Award, and had been a great success on Broadway, it was still, one must now admit, a rather moribund affair, arguing, in often stiffly oratorical rants, that the worn-out concept of the American Dream should be available for Blacks, as if nothing had changed since the white middle-class 1940s aspirations of the Lomans.


The young, first-time writer Hansberry had packed her play, moreover, with so many social and psychological concerns—the decreasing significance of male Blacks in family life, the shifting values of younger Blacks represented by Beneatha Younger, the churchgoing values of the older generation as embraced by the family’s mother, Lena, and numerous other hot-button issues such as white racial prejudice, abortion, Afro-centrism, thievery, alcoholism, and personal betrayal.


For all that, the play, in its family-based ideology, often seemed claustrophobic and confined. Just a few years later, Black playwrights such as Adrienne Kennedy, Amiri Baraka, and later still, figures such as Suzan-Lori Parks would bring up new issues and open new ways of expressing them, while Hansberry was sill intent on writing a well-made play in the manner of the white theatrical patriarchs such O’Neill, Wilder, and Miller.
According to Ben Mankiewicz, introducing the film on TCN the other day when I watched it once again, there was also an intense disagreement between the two leads, Claudia McNeil as Lena and Sidney Poitier as Walter Lee, who both felt that they were at the center of the work. In fact, I would argue, they were both right, since their characters would surely have argued the same thing, perceiving themselves at the center of this familial community.

Indeed, one might argue that if the tensions were high on the set, there was really no “set,” in the sense of a Hollywood shoot; rather, Petrie and his cinematographer, Charles Lawtorn, Jr. had rigged up kind of “stage.” Petrie’s struggles to take the play out of the Younger living room and kitchen, were mostly unsuccessful, allowing him only a few moments to show Walter Lee at work driving a Cadillac, set against the soft jazz strains of Laurence Rosenthal’s score, and later, planting him in a bar where Lena comes to retrieve him. But otherwise, the film reads as a kind of close-up recording of a stage production.
For all of that, however, this movie immediately grabs the viewer by the lapel and doesn’t let go until Lena picks up her beloved flower and turns out the lights of the long-rented rooms wherein the Younger family members have lived out their lives.
Yes, the characters are all types, but each is given his or her due and, because of the excellent acting, each comes off with some dignity: Walter Lee is the pained dreamer, who hasn’t quite the imagination, however, to escape the limitations placed upon him by situation and society alike; Ruth (Ruby Dee), as the suffering and fed-up wife, who nonetheless continues to love and support her husband with everything she has to offer; the worn-out yet inspired Lena, easily balances her no-nonsense logic with the selfless recognition of the needs of those around her; and Beneatha (Diana Sands), representative of a new generation is confused and tortured as the old without truly knowing it, yet may possibly be able to finally escape the chains that still bond this Black family to their roots in slavery.
Petrie’s version lacks nearly any humor, and thrusts each of its many “themes” in its viewers’ faces like so many stink-bombs, that explode, one by one, in this family’s life. How the Youngers can find a way to unification and dignity after what they face within 128 packed minutes of the drama, is nearly unimaginable; yet Hansberry, far better than Miller I would argue, swiftly pulls the cloth off the fully-set table with an unexpected grace—the very moment the family, now led by chastised Walker Lee, is about to give up on any further dreaming—worthy of the greatest of magicians. And it is with significant pride that the Youngers, represented by the nurturing Lena retrieving her pot-bound begonia, move on to the blandishments of American suburbia, leaving us behind in tears of joy and well-wishing.