things that cannot be said
by Douglas Messerli

Although he was certainly fascinated with the macabre, with sinister characters out to rob, maim, and kill their victims, and was highly suspicious of most institutions, local, federal, and international, one might easily argue that Alfred Hitchcock was one of the most morally predictable directors in Hollywood. If innocents in his film are often accused and tortured for wrongs they did not commit, and villains come close to going scot-free, in the end moral order is restored: the truth is not only revealed but it prevails, even if harm and danger has changed those wrongly suspected and accused. If his heroes suffer, they almost always are redeemed. Even the lovely heroine of Dial M for Murder is saved the gallows at the very last moment by the bumbling police inspector. On the other hand, the alluring heroine of Vertigo must die because of her involvement in a murder. Perhaps only the murder of the escaping secretary of Psycho seems unjust—although, we must admit that, having robbed her boss, she is not a true innocent. And even if it though first appears that an entire community has unintentionally conspired to do in Harry in Hitchcock’s The Trouble with Harry, the doctor later confirms that the real cause of death as a heart attack, and Harry’s death brings that community together in ways that redeem nearly everyone’s lives. We never meet the innocent strangled in Rope, but the murderers are finally brought to justice. There are no instances that I can immediately think of in mature Hitchcock works where the villain completely escapes punishment. 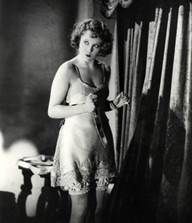 It is fascinating, accordingly, that  Hitchcock’s first “talkie,” Blackmail, the true murderer, Alice White (Anny Ondra), protected in a coverup by her boyfriend, Detective Frank Webster (John Longden), escapes punishment, while an innocent, if unlikeable petty thief and blackmailer, Tracy (Donald Calthrop) is deemed guilty and killed in the police chase. Indeed, walking away from the New Scotland Yard the guilty couple of Blackmail even break out in laughter—laughs of relief rather than utter villainy, and not so very different with the tense laughter they shared earlier in the film—which seems even more immoral, in some respects, than Alice’s original crime.
For, Alice has murdered only to protect herself, and the man she stabs, Mr. Crewe (Cyril Ritchard)—a sleazy effete artist—is attempting to rape her. So perhaps she might never have been brought to trial. Yet she and Frank attempt to cover up the truth. Even here Hitchcock redeems her, in part, by having her, of her own free will, visit Scotland Yard in order to confess, and that act presumably reveals her moral fiber. But the fact remains that she has caused the deaths of, now, two men, and justice has not never served.
The problem with the world of Blackmail is one of expression, or, rather, the lack of it. Although many unpleasant things are talked about, particularly by the endless gossip the visiting neighbor (Phyllis Konstam) who is quite willing to talk about murder and knives, many more important things cannot and do not get said. In part, the problem is that the film was first to have been a silent film, but Hitchcock, recognizing the potentialities of the new “talkie” version of filmmaking, shot the film as both a silent film and a talkie.
The first scene, with only accompanying music, wherein the police, getting a lead, race to arrest a hiding criminal, explains very little about his guilt, showing only that he must be guilty since he has a gun laying nearby and is picked out by a woman in a line-up. Soon after, we see the detectives, washing up in the Scotland Yard bathroom, participating in their own kind of petty gossips, one of their kind complaining that his tailor was so bad that he has never picked up the fabric he purchased in an attempt to refuse to pay the tailor.
Alice is fuming in a outer office because Frank has been late, and as they walk to a nearby tea house they are mostly silent, she still angry for his lateness. At the tearoom they are hardly able to find a table, and when they do it is nearly impossible to get the attentions of the waitress. Alice, we quickly perceive, has other reasons why she is angry with her boyfriend, including the fact that she has apparently flirted with another man, making an appointment with him in that very room. And she soon lies to Frank, skipping out on their planned movie date to meet up with the man, the artist Crewe.
Frank, miffed, storms out in anger, but once out of the teahouse he has a change of heart, and seems determined to return his lover. Before he can take action, however, she reappears with Crewe, and he perceives that she is “cheating” on him.


In short, everyone seems to be keeping secrets from each other, refusing to speak out and discuss their desires and priorities. Although Alice clearly thinks of herself as a modern, free-thinking woman (Crewe even teases her about her attitude by singing “Miss-Up-to-Date”), she is still a relative neophyte in the sexual world, an innocent who accepts Crewe’s invitation to see his studio more as a dare than as a tacit approval of his later sexual nuances. Naively, she even allows him to undress her, so that she might pose for him in the guise of a ballerina.
Although Crewe presents the aura of being a successful artist, his art, obviously filled with operatic and balletic images, is kitsch and artsy in uninteresting ways, his most recent painting representing a kind of brutish Pagliacci, for whom the later blackmailer Tracy has apparently been the model. Indeed, there are hints—nothing gets openly said—that Crewe himself is being blackmailed or least pestered for money by his former model. We never find out why Tracy is bothering the artist and, apparently, even stalking him, but we certainly suspect some nefarious relationship, perhaps even of a homosexual nature. Again, Hitchcock and his characters seem unable to speak out in this film, being torn, it appears, between speaking and silence.
Once the crime is committed, Alice enters what might almost be described as a state of distraction, and she is virtually unable, even to speak, let alone explain the situation to herself or anyone else. Is it any wonder that Alice becomes fixated on one word only, “knife?”
Tracy approaches the two, having discovered Alice’s other glove, with such a oiliness— hardly daring to speak the word blackmail—that the terrified couple are forced to even serve him breakfast at Alice’s parents table. And throughout the long scene where he finally makes his demands known and a deal is struck, their conversation is constantly interrupted. Words are separated from sentences, with other words introduced without context. Meaning is attenuated.


Even after Frank hears from his superiors that the blackmailer has suddenly become a suspect in the murder, we are still uncertain whether he is attempting to frighten Tracey away from any further blackmail or speaking the truth as he supposedly awaits the police van to arrest the vagabond.


In this film in which characters cannot speak their minds, it is highly ironic that Tracey escapes into The British Museum, the bastion of images, objects, and documents that detail the history of the world. That he slips into the dome itself, falling to his death in the very center of this bastion to knowledge, without even quite knowing why he is on the run, speaks volumes—but once again keeps the truth in abeyance.
When Alice does attempt to admit her crime, no one will let her speak; and when she finally admits her actions to Frank, himself, she still cannot bring herself to even say the words “He tried to rape me,” explaining that Crewe was attempting to do something terrible to her.
The Pagliacci painting, finally, becomes a emblem of not only Frank’s having been nearly cuckooed, but of Alice’s guilt in the entire affair—something, evidently, that provokes, like the sad clown himself, only laughter. It is the painting, not language, that gets the final say in this portrait of a world that cannot speak of so many things.

Posted by greenintegerblog at 2:58 PM