Alfred Hitchcock | The Lodger: The Story of the London Fog

Eliot Stannard (screenplay, based on a novel and play by Marie Bellec Lowndes), Alfred Hitchcock (director) The Lodger: The Story of the London Fog / 1927

Another murder has just been discovered on late Tuesday evening in London, and the city is clearly up in alarm. Chorus girls, all decked out in blonde wigs, are terrified; and why shouldn’t they be, when the Jack the Ripper-like murderer, who calls himself The Avenger, loves “golden curls,” which one of the theater marquees features in blinking neon? The blonde beauty Daisy Bunting (June Tripp), who works as dress manikin, laughs at her compatriot’s fears, but others play it safe by donning black wigs and accessories that hide their golden tresses. 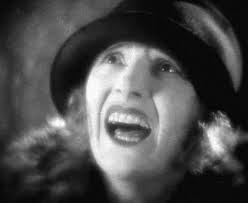 So begins Alfred Hitchcock’s remarkable 1927 silent film, The Lodger: A Story of the London Fog, a film, which, strangely enough, shows very little fog and strays outside only on a few occasions. Given the long set-up of the first scenes, wherein detectives come and go and the citizens of the foggy city eagerly seek out the tabloid clues the murderer leaves behind, one might imagine we are about to be presented a murder mystery, in which, before the evildoer is revealed, we might discover why he calls himself The Avenger, what he or she is avenging, and why his signature is surrounded within a triangular figure. In fact, none of these important details are ever revealed in Hitchcock’s film, and although the entire metropolitan London seems intent on solving the case as quickly as possible, the director seems instead to loll away his time on an extremely handsome lodger (the matinee idol, Ivor Novello). Although Hitchcock does everything in his power to make us imagine that the lodger, Jonathan Drew, might be the murderer, once the stranger has unraveled his ridiculously coiled scarf, the audience is so awed by his presence that, along with Daisy, we never once truly suspect he is The Avenger, despite his moody, brooding behavior and his very suspicious activities—in particular his charting of the killer’s victims with the pattern of the triangle of the murderer’s calling card.
In short, once the lodger shows up to rent a room in the Bunting house, we quickly realize that this film is a complete obfuscation—of character, of genre, and of narrative. One might primarily describe The Lodger as a love story, given its slow-to-boil romance and one of the most memorable kisses ever presented upon the screen (more of which later) if it were not for the obvious fact that once Jonathan enters his new digs, he politely demands the removal of all the all paintings of golden-haired beauties—a truly unconventional way of wall decoration within the Bunting household, which makes you wonder more about the owners than the new guest—leading Mrs. Bunting (Marie Ault), her husband (Arthur Chesney) and even Dasiy’s common-Joe detective boyfriend, Joe Chandler (Malcolm Keen), to joke about the boarder’s “queer” ways and “gentlemanly behavior, which combined with the open secret in the theater world of the day of Novello’s homosexuality—so outrageously obvious to his theater friends that it might almost make it appear as if his not nearly so pretty friend, Noel Coward, was in the closet—most certainly strips him of his heterosexual gravitas. Strangely, what all these quite obvious “false” signals accomplish is to do away with any pretense of reality, and allow the viewers to sit back and simply enjoy the yarn.
The story is not really much about desperately seeking the Avenger, but a tale about who will win in the search to love and control—and Hitchcock’s tale is very much about “control”—the beautiful woman at the work’s center. Although her loving parents are obviously determined to keep her safe and protected within in the limited confines of their kitchen and firesides, Daisy is a slightly loose cannon, a woman clearly of age, who dresses up each day in beautiful gowns, and who, despite her low-class background, has had a taste of better living. Joe, to whom the parents look to wrap her up in a convenntional marriage, is a jovial and friendly lunk, who sentimentally signals his love to her early in the film by cutting out hearts from Mrs. Bunting’s cookie dough; when she pretends to reject him, he breaks the heart in half, expressing his doughy reality all too explicitly. Daisy’s parents clearly encourage the couple’s mocking love-making, skittering away whenever they feel they might be in the way, and welcoming Joe openly into their kitchen and hearthside. 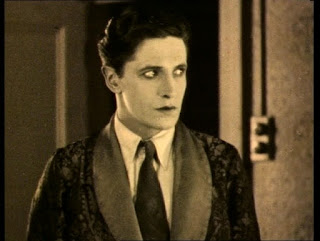 If the stranger in the room above is mysterious, he is also, in his romanticized expressions of suffering (limitations of Novello’s acting ability which Hitchcock surely encouraged), and his dramatic pacing’s over their heads—which Hitchcock deliriously advertises by turning the ceiling into a glass walkway so that we might literally see those vigorous back and forth strides—totally appealing to the caged-canary the ordinary Daisy feels herself to be. Before her family and Joe can even blink, she has insinuated herself into the lodger’s quiet retreat, playing chess with him as if the true battle were not a game of the intellect but of the heart.

Joe awkwardly attempts to intercede (he simply doesn’t like him, he declares), her father forbids her to see the lodger, but it is her mother, who in her twisted, bourgeois imagination begins to suspect that the intruder is something more than simply mysterious that eventually sends everyone on the wrong scent, as their controlling ambitions begin to outweigh common sense, exaggerating the lodge’s odd behavior within the limited capacities of their imagination: the lodger must be the murderer himself!

Each character responds in his or her own way. An innocent gift of a dress Daisy has been modeling, given her by Jonathan, is angrily returned to the sender by Daisy’s father. Assigned to The Avenger case, Joe, decked out with a new set of handcuffs, attempts to place them on Daisy, making it clear to her and the audience what their life together might truly represent. When the final kiss between them occurs, it is a slow moving approach of the lips filled with such fear, sexual illicitness, lust, and danger that it is nearly unbearable. Frankly, that kiss between the gay Novello and the slightly tipsy Tripp is more romantic than any smooch between Boggie and Bacall or Garbo and anyone else on the screen. When, upon another Tuesday night, Joe catches the new lovers upon a bench, and tires once again to interrupt their love making, Daisy breaks off her relationship with ordinary life.

Hitchcock shows a chastened, jilted Joe actually going through the process of something he has never done: thinking. But what his thoughts create is a vengeful plot, which manacles the now obviously innocent—since a few of the past events are finally revealed to us, including the fact that his sister, dancing in his arms, has been The Avenger’s first victim—and sends Jonathan on the run. By this time, however, it is not only the Bunting family and friends who are determined to control events, but the entire community which—having no possibility of perceiving realty—are literally determined to strip the beautiful man of sexual allure by chasing him down and crucifying him, like Christ, as he hangs on his symbolic cross of an iron fence, his handcuffs caught within the steel spikes of the wall. By this time Joe is told that the police have caught the real murderer (whom we never see and learn absolutely nothing about), the Judas recognizes his tragic mistake. He reaches the crucifixion scene almost too late, as Jonathan falls in pieta-position into Daisy’s lap.

I almost wish Hitchcock might have left him upon that cross with the mass murderers tearing him to shreds; for certainly it would made a powerful statement, implicit in all Hitchcock films, that we are all truly guilty of all culture’s worst offenses, a fact, reiterated from the German Expressionist ideology (whose influence is very obvious in this film) that “everyman is a murderer.” But, as I’ve written elsewhere, the great English-born director, with his good-boy ethics and Catholic guilt, finds it nearly impossible to end his films in moral disorder. Despite a kind of nervous breakdown, Jonathan recovers to reclaim his Mary Magdalene, whisking her away to his wealthy penthouse in order, apparently, to marry her, with her parents checking out the place and settling into what will clearly become their favorite chairs by the fireplace.
The observant movie-goer might note, however, that the view from the lovely windows is that with which the movie began: the neon blink of “golden curls.” Certainly, our new Prince has won his “golden curls,” but at what cost to the blonde bride we are never told. Might she become, given the film’s sub-text of incestuous infatuation, merely another beloved sister? And what crime was that avenger avenging?

*Despite Hitchcock’s seemingly perceptive dictum that the villains of film must be handsome and debonair simply so they might be allowed to approach their victims, he might have learned his lesson in this film which he had latter to rediscover in Suspicion: an extremely handsome (gay or bisexual actor, in this case Carey Grant) cannot be believed to be the murderer. Even in Rope, we want to forgive the Farley Granger figure for his involvement in what is primarily John Dall’s crime. It is hard as human beings to truly believe that evil could lurk behind the beautiful exteriors of such beautiful women and men. Hitchcock kept trying to expose that weakness in human perception, and succeeded, certainly, with Anthony Perkins (another gay man) in Psycho. It is quite fascinating to realize, accordingly, that if Hitchcock casted many of his films with icily frigid, but absolutely beautiful blondes, he cast them also with gay men or with heterosexual men (like James Stewart, Robert Cummings, and Henry Fonda) who were such straight-laced figures that they existed outside of the sexually aggressive male stereotypes.
Posted by greenintegerblog at 3:31 PM