John Landis | Into the Night

out of control
by Douglas Messerli

In the same year as Scorcese's After Hours, director John Landis filmed his Into the Night, both works sharing numerous similarities, notably the portrayal of their heroes as nebbish-like failures, cast out into a world they could not possibly have imagined and not able to comprehend.
Ed Okin (Jeff Goldblum) is having trouble sleeping, and, as he admits to his friend and co-worker Herb (Dan Aykroyd), something is wrong with his home life. His wife leaves him each morning with a purposeless kiss, wishing him "a nice day" the way a bank teller might speak to her customer. His insomnia is beginning to interfere with his work (he has missed the fact that the engineering group with whom works, has announced a different set up of frequencies weeks earlier). A trip back home in the middle of day, reveals that his wife is having a affair with a co-worker. Although he is dismissive of Herb's coarse advice to fly out to Las Vegas—"There's a girl there who do 'anything you want' for fifty dollars an hour." "Will she bring me a pony?"— he suddenly finds himself at the Los Angeles airport without any real destination.
By accident Ed witnesses a brutal murder of a handsome young Iranian, Hasi, and an attempt on the life of Hasi's companion, Diana (Michelle Pfeiffer) by SAVAK (Iranian secret police controlled by the evil Shaheen Parvici [Irene Papas]). Many of the minor characters of Landis' film are played by fellow film directors, including Landis serving as one of the SAVAK bungles. Throughout these figures are presented as racial stereotypes,  foolish and incompetent; but given the number of murders they and others actually accomplish by the end of the film, they are definitely dangerous fools, despite Okin's often casual disdain for all that happens around him. 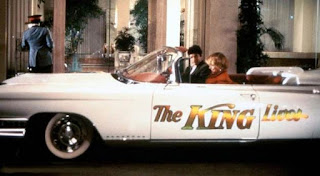 The moment he drives Diana into temporary safety, he is trapped into a nightmare scenario where the SAVAK agents track them throughout the city; a Frenchman, Melville (Roger Vadim) and his henchman (David Bowie) try to kill them; while Diana's brother, an gay Elvis imitator, is completely indifferent to their survival. Landis somehow balances all the blood-letting with wit and humor as Ed and Diana incredulously manage to outwit and outrun the evil forces attempting to destroy them.
Diana has been unwittingly involved with the appropriation of some valuable jewels which the Shaheen is determined to retrieve in order that she can make escrow on property. The obvious and ridiculous greediness of this underground world makes for some comic book moments as Ed meets challenge after challenge with a wry sense of humor. Even Melville's man, Colin (in one of the best scenes of the film) marvels at Ed's nonchalant style:
Colin Morris: [Ed is waiting outside the Tiffany store for Diana] You're very good. You're really very good.
I'm amazed we've not met before.
Ed: I beg your pardon?
Colin Morris: I've been watching you ever since you left Caper's yacht. Very impressive.
Ed: Oh yeah?
Collin Morris: You can stop performing now, Ed. If that's your name.
Ed: Heh, I don't know, what are you talking about?
Collin Morris: OK. I represent Monsieur Melville, and I can assure you that he will be far more reasonable than the SAVAK.
Ed: The SAVAK?
Collin Morris: The Shah's secret police. Death squad. Iranian gestapo. *Shaheen's* boys.
Ed: ...Shaheen's boys...
Colin Morris: Heh, heh, I like you Ed. I do like you. You're very good.
[Draws pistol, puts it in Ed's mouth.] The stones.
Ed: What?
Collin Morris: Where are the stones?
Ed: I can't help you.
Collin Morris: [Cocks pistol] We do understand each other, don't we?
Ed: Uh, I don't know.
Collin Morris: [Sees police car approaching, puts pistol away] Very good. Very impressive. I'm sure
we'll chat again. 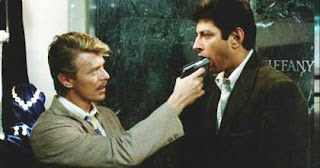 Much like early film comedians such as Buster Keaton and Charlie Chaplin, there is a complete innocence, almost an idiocy about Ed, that both saves him (and Diana) and gradually transforms him into a kind of loveable fool.
The character Diana, on the other hand, ultimately, is one of the most merciless manipulators possible. Although Landis attempts to make her also a near-innocent, unaware of any of the larger effects of her relationships with men like Hami and the wealthy Jack Caper (Richard Farnsworth) upon herself and others, she is anything but uninvolved. With no vacillation she uses her friend, a wanabee actress, to hide her jewels within a secret pocket of her coat, which later results in the woman's brutal murder by the SAVAK. Nonetheless, Diana breezily returns to the house after the after the attack to pick up the coat, using a passing policeman as a way to escape Melville.
Just by showing up at the apartment of Hamid, she causes his murder and that of most of his family and servants. Everywhere she goes, including a short visit to her brother, mayhem and murder follow. If Ed previously has fretfully found life uneventful, in the two nights he spends with Diana (one of them in a dark culvert), he encounters a whirlwind of destruction far deeper and more perverse than Scorsese's computer nerd, Paul, encounters on his long outing.
"She is a woman who will go with anyone," Shaheen tells Ed; but this time, it appears, she has no one else left who might save her. Ed is her only hope.
In a final attempt to contact Caper, her former lover, she breaks into his house, only to discover that he is gravely ill and his wife has returned to claim his estate upon his death. Caper suggests yet another "caper," a meeting between Ed and Shaheen to make a deal for the return of the stones.
Again, Ed's oddball lack of consequence saves the day, convincing the mad Medea-like villain that she has no choice but to go along with their plan: Diana has hidden the jewels within dozens of bouquets of roses at the flower market under the name of Parvici, allowing the couple time to escape.
But the trip to Mexico is delayed, as the captain explains: the plane is malfunctioning, and the couple has no choice but once again to face the murderous forces of Melville, SAVAK, and this time, government police, brought in presumably by Caper. A standoff results, and suddenly the humor that has been partner to the film's horror, turns sour. Ed, once more with a gun pointed at his head, begins with his usual banter: "This is ridiculous. Big shot, huh? You got a gun. Now what? Shithead, you. Huh?"
His next word, however, says it all. The possibility of the "real" world has dropped away. The man he faces is a "maniac." And suddenly we recognize the level of despair out of which Ed has survived these horrific days and nights: "Let me ask you something. Maybe you can help me. What's wrong with my life? Why is my wife sleeping with someone else? Why I can't I sleep?"
His very personal plea resonates even with the maniac, as he turns the gun upon himself and shoots out his brains. 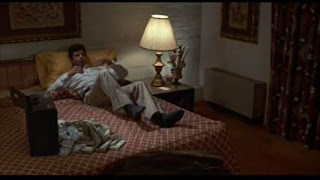 Before Ed and Diana have even had time to recover from these new circumstances, FBI men whisk them away, as the couple fear another kind of arrestment. Landis returns to humor as the FBI agent dumps a suitcase of money before them upon the bed: it's all theirs. Which, in the director's cynical view, is slightly contradicted as the agent picks up several packages of bills, stuffing them into his own pocket. "Who's gonna tell?"
For the first time in this pummeling, pulsing movie, the "lovers" are left to themselves. But instead of falling into an embrace and sex, Diana luxuriously cleans her blood-stained body, while Ed finally falls into a profoundly deep sleep.
A sharp bang declares a new day, actually the afternoon of the following day. Diana has disappeared—just as we might have expected. Only this time, things are different. Perhaps she has turned a new corner, cleaned up not just her body but her life. She comes bearing gifts, the suitcase, tickets for a Mexican escape. It is hard to say whether this couple will fall in love or simply experience further lunatic adventures. But perhaps Ed, at least, can finally sleep at night. And nobody will ever again be able to tell him "Have a nice day."