Rainer Werner Fassbinder (writer, based on a fiction by Alfred Döblin, and director) Berlin
Alexanderplatz / 1980
I have always resisted introducing a work by proclaiming its difficulties. A good reviewer, presumably, should be able to resolve those before beginning to write or, at least, during the process. But the very ambitiousness and commensurate success (as well as its failures) of Rainer Werner Fassbinder’s 15 ½ hour, 14-part original television series, Berlin Alexanderplatz, if nothing else, takes one’s breath way—and all this after its creator having already directed some 40 previous films over little more than a decade. Even in order to watch the work one has to hunker down, hour after hour, suffering what critic Tom Tykwer describes as “a stretched out temporality” that “creates an elliptical sensation. For a while your concentration is so completely distracted from the narrative chain of cause and effect that you almost lose your orientation and ask yourself, in view of such a total standstill, whether the story will ever get moving again.” 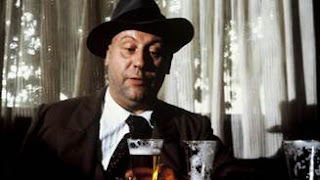 And there is the nearly nauseating feeling that arises from watching a work centered upon a heavy-set, lumbering, stupid, often drunk, sexual manipulator such as Franz Bieberkopf (brilliantly performed by Günter Lamprecht), who has already killed one of his lovers, Ida, in a drunken fit of anger and, who, after serving 4 years in Berlin’s Tegel prison, stumbles out into the daylight like Simpliclus Simplicissimus (one of the original author, Dōblin’s, numerous literary influences) determined to be a “good man.” In fact, both Döblin’s and Fassbinder’s inverted picaresque takes us circle by circle into an ever spiraling downward voyage through the German hell of the Weimar Republic to reach the anvil of Nazi horrors at its end.

Yes, there is also much comic about following Franz the dolt about the Berlin streets and into the numerous houses, bars, and underground passages through which he makes his way. And, despite the horrible mess a human being he represents, there is something sweet and even dream-like about the man’s (and actor Lamprecht’s) almost putty-like face. If one moment Franz is a snarling monster of a mad-man, in the very next he is a sweet, loving simpleton asking for his lovers’ and, by extension, our forgiveness. Each time he acts badly, Franz’ landlady Frau Bast (Brigitte Mira), Eva (Hanna Schygulla), his former lover for whom he played pimp, and many of his current lovers willingly forgive him; but increasingly it becomes harder and harder to sympathize let alone admire such an oaf.
Which brings us, certainly, to our very first question: why are so many dozens of women, particularly Eva; Franz’s first lover after imprisonment, Lina (Elisabeth Trissenaar); the widow he encounters while selling shoelaces; his friend Reinhold’s cast-offs, Fränze (Helen Vita) and Cilly (Annemarie Düringer); and particularly the beautifully young girl from Breslau, Mieze (Barbara Sukowa) all attracted to this semi-bestial slob? Yes, Franz may seem loveably malleable, like always shifting face, and, accordingly, a man that quickly can be made over. Perhaps he is even a reliable lover, although early in the film there is evidence that Franz has some difficulty in getting in erection. But what does it say about Berlin culture that all these women gather round him, many, like Eva and Mieze, perfectly willing to work as prostitutes to support him?


Ignoring the widow, whose dead husband looked somewhat like Franz, what does it say about a world which some writers such as Robert Beachy have declared “no one was a virgin,” that Franz is given such latitude with women, whom he falls in love with before beating and betraying them? If Döblin and Fassbinder, each in their own way, are depicting a world in which women are treated little better than cattle, beasts to fattened up for male pleasure, their behaviors clearly represent these women’s own willingness to offer their bodies up for a kind of sacrificial slaughter.


We can speculate, of course, that in a city where a large percentage of the males are unemployed, that there are perhaps only two other choices, prostitution or robbery. Franz’ own attempts at employment seem to prove the point. After failing to sell street goods, robbed (of his products and his honor) by his partner Otto Lüders in his attempt at selling shoelaces, and later arousing the hate of acquaintances for his attempt to sell the Nazi Party newspaper Völkischer Beobachter, Franz has few choices. The women of this society, moreover, have even fewer choices if they want to survive and find protection, particularly if they are independent minded such as Eva and Meize.
Yet, somehow, these answers do not quite explain the strange attraction of the central figure of Fassbinder’s work for these strong feminine figures, particularly given the fact that Franz is also often passive in his choices of his companions, continually refusing Eva’s sexual advances and allowing himself to casually take-up with Reinhold’s cast-offs. While I am sure that some readers and viewers will perceive this apparently casual approach to sex as simply shocking, revealing the cultural decadence of the Weimar Berlin, to others such as me, it represents a disconcerting desperation of all those involved. Sex in such a world, even in the lurid perversity of the block-long open brothel through which Franz often wanders of his way to and from his apartment, seems less licentious and alluring than it suggests a kind of bored detachment from all real sensuality. Even the barker for the Great Whore of Babylon has difficulty finding clients, as we watch him, upon one occasion, dispassionately kissing and snuggling up against one of his own transsexual “offerings.” What is almost just as interesting about Döblin’s and Fassbinder’s representation of Berlin is the complete absence of the numerous gay and boy prostitutes with which the city seems to be teaming in other works I’ve written about in this volume. In fact, Franz’ strange determination to sell the homosexual texts of the noted homosexual scholar Magnus Hirschfeld, ends in an absolutely homophobic furor from his current girlfriend.


In other scenes, German psychologists of the day offer up trite evaluations of Franz’ condition, suggesting shock therapy or even a complete abandonment of any attempt to save him from starvation.
In short, this “hyper-dramatic” ending turns much of what the director has carefully built up through naturalistic-expressionist depictions into pure camp, almost as if the director were throwing up his arms in despair of trying further to deal with his everyday heo.. Upon his cure, as Döblin also put it, the character no longer matters. He is now hired as an ordinary watch man, akin to the prison guard who first sent off into this post-Edenic world. Although Franz is determined to be on the lookout, guarding the wealthy garage of cars, we can be sure that, once again, he will be unable to figure out what’s going on. And the film ends with a flourish of the Horst Wessel Lied, the Nazi Party anthem--

clamoring against the strains of the Communist Party’s Internationale!
If, in the end, accordingly, this great film seems almost to spin off into a series of contradictory possibilities, Fassbinder and we, quite obviously, have the advantage of Döblin in knowing precisely what happened. And given the consequences of the next decade, Franz— except for his representation of the German everyday man—truly is inconsequential. Yet those who have seen other, earlier Fassbinder films, know that the director is hardly disinterested in how Franz came out of the war. In film after film, Fassbinder returns to Döblin’s highly influential film, a work which he himself describes as not only helping him to “ethical maturation” but literary permitted him survival during his turbulent puberty:

…Berlin Alexanderplatz didn’t only help me in something like
a process of ethical maturation. No, it also provided genuine,
naked, concrete life support when I was really at risk during
puberty, because I was able to apply the story to my own
problems and dilemmas, oversimplifying, of course; I read it
as a story of two men whose little bit of life on this earth is
ruined because they don’t have the opportunity to get up the
courage even to recognize, let alone admit, that they like each
other in an unusual way. Love each other somehow, that some-
thing mysterious ties them to each other more closely than is
general considered suitable for men.


If dozens of questions still remain unanswered at the end of Fassbinder’s Berlin Alexanderplatz, we still have many others of works to turn to in order to help comprehend the complex tale which we have just experienced. In one of his earliest films, Love is Colder Than Death (1969), a character named Franz (played by Fassbinder) shares a prostitute with a male criminal friend to whom he clearly more attracted than the woman. In the 1970 film Gods of the Plauge, another Franz (Harry Baer this time around) is released from prison and, like Döblin’s Franz attempts to start a new life, but soon through his relationship with another man and the criminal underworld is swallowed up into a destructive world from which there is no escape. The American Soldier (also from 1970) shares many of the same patterns of sexual longing between to long time male friends as between Franz and Reinhold, again ending in a gangster like violence. Beware of the Holy Whore although set in a Spanish hotel, presents its characters very much in the same kind claustrophobic world inhabited by the figures of Berlin Alexanderplatz The central character of The Merchant of Four Seasons (1971), like Franz, is forced to live by selling fruit on the street, and, after beating his wife and suffering a heart attack, is left, like Franz incapable to keeping his wife away from another vendor he has hired to replace him.
Finally, in Fox and His Friends (1975)—the work most obvious in its parallels with Döblin’s book—Fassbinder again takes on the role of a character named, this time full out, Franz Bieberkopf, who, working as a carney mind-reader, Fox, wins the lottery only to fall in with better-off gay acquaintances who trick him out of all his winnings and leave him presumably to die face down on the underground floor.
And, indeed, in nearly all of his films Fassbinder weaves in elements of the great Döblin fiction. In short, one might argue that his longer Berlin Alexanderplatz, were it not so determined in its attempts to winnow down the actual plot of the 1929 work, as merely another version of his ongoing commitment to explore a Germany filled with Franz’s, men who never growing up, are easily fooled by the society spinning around them. Yet if Franz is ever the fool in these works, he is also a kind of Christ, a holy fool for whom we cannot but feel love and some real sympathy. For he is every one of us who dreams of being more than we know how to be, who imagine joining a society that is more caring and purer than the one in which we must everyday make our peace. In his incurable optimism Franz may be an idiot, but he is a hero in his ability to transcend the crude cynicism also central to Fassbinder’s campy, melodramatic worlds. As I have argued for Stella in Williams’ A Streetcar Named Desire, (see My Year 2002) Franz is the being who brings all the other hysterical types seem almost real, anchoring Fassbinder’s great cinematic achievement to life here on earth.