A FAMILY AT WAR WITH ART
by Douglas Messerli

I believe I first watched Andrei Tarkovsky’s film, The Mirror, in 1991, writing a bit of nonsense about it long before I had begun the annual cultural memoirs of the My Year series. The fact that I truly did not understand the work very well in apparent in the abstract generalities I chose to discuss it:


The Mirror is a film of forgetting, or the need of it. Tension must be redirected. Fear, anger, hate, must be cut away for the survivor to be free to love and speak anew.

I continued, on the film’s structure:


The pattern of this film, however, necessarily is one of memories, connections, relationships—an absolute jumble of alliances and links. The Spanish Civil War, the Siege of Leningrad, Mao’s attack on Russians are part and parcel of the structure of relationships between wife, husband, mother, father, son. 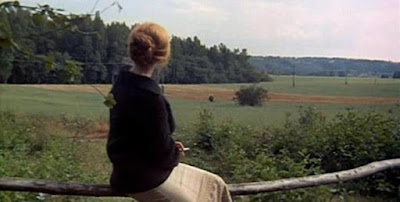 Well, I reflect today, after seeing that film at least two more times: “perhaps, yes and no.” Yet it is also clear that I couldn’t quite comprehend what I saw. What seemed so difficult and “jumbled” back then—and still apparently feels that way to a number of contemporary film commentators—now feels much more coherent and ordinary, without the film having lost its sense of wonderment.

In some respects, Tarkovsky tips his hat to his methodology in the very first scene of the film, wherein, through a television commentary, we observe a behavioral psychologist attempt to cure a young stuttering boy (the same actor who plays Alexei and Ignat throughout) undergoing a kind of hack version of hypnosis or thought transference. Certainly the rest of this director’s film can be said to be hypnotic, as in a series of stunningly beautiful images, in color and black and white, as the story weaves in an out of the Tarkovsky family psychological tensions, focusing on both the childhood of the director and his poet-father.

Although both sets of families might desire to live in the isolated world represented by the country house in which the action of the film begins, the males of both generations quickly abandon that world.

The film begins there, in the country, with the director’s mother, Maria (Margarita Terekhova) sitting alone on a fence as she watches an approaching man—which she might wish were her missing husband—a local doctor (Anatoli Solnitsyn) who asks about the path to the nearby village. Maria explains that he should have turned at the bush in the distance, but the doctor, briefly enchanted by Maria’s beauty, remains, somewhat flirtatiously discussing small topics like the weather and the region around. She threatens to call her husband, but he doubts that she may even be married, since she has no ring. What we already know (through the narrator and images) is that the father, Arseny, has left them, and that indeed this young woman has two children to care for.

The event, although beautiful to behold, might be entirely without meaning except that it represents both the utter loneliness and sadness of the beautiful young woman, and explains Alexei’s (also known as Alyosha) (Ignat Daniltsev) fears and his quietude throughout. The collapse of the fence when the doctor attempts to sit beside Maria, clearly symbolizes the collapse in part of her and her children’s world as the events of World War II and the global politics of the post-war period are interwoven into the fabric of both the father’s and Alexei’s family lives.

Throughout, and in varying degrees, outlying buildings catch fire and burn to the ground, children are forced to go to battle, the Spanish Civil War destroys thousands just as the siege of Leningrad had destroyed as many before. In non-linear time, Tarkovsky represents that the fear and even hysterics of this family are tied together not only my personal betrayal and absence but by global events beyond their control.

In one highly dramatic scene, Maria, working now in the city as a proofreader (possibly for her own husband’s collection of poetry) rushes to work terrified that she has missed a terrible typo. The book has already gone to print, while her colleagues reassure him that everything will be fine. Running to the cabinet where finished manuscripts are stored, she discovers, indeed, that she there no such typo in the work, only to later be harshly attacked for her selfishness by the colleague, Liza (Alla Demidova) who has previously attempted to assure her.

Tarkovsky coils the skeins of his story even more tightly by serving, at moments, as narrator himself, by using the voice of his own father, Arseny, to read his poems throughout, and by  employing his real mother, Maria Vishnyakova, as the elderly Maria and using the acting talents of his own wife, Larisa Tarkovskaya. In short, it is hard at times to dissociate the dramatic family drama from the real-life drama that has already been played out. Like his father, Aleksei too divorces his wife, Natalia (also played by Terekhova) who lives apart with their son Ignat. As I noted in my early notes, the past, in this film, does indeed repeat itself. 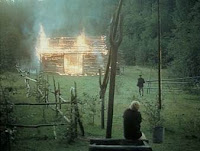 Having now read about the life and poetry of Arseny Tarkovsky, however, I recognize how alienating and even frightening it might have been for the young Alexei to even visit his father, who lived in an apartment of relative luxury filled with literary and art books, while the mother and son remained in a dilapidated home, at one time so hungry and penniless that Maria walks barefoot to the distant home of same doctor who appeared in the second scene of the film, to ask for help. The doctor is not at home, and his wife, although greeting them as friends, does not bother feed the two before, embarrassed by her visit, Maria and her son quickly retreat..

At another moment while the young boy waits alone in his father’s empty apartment, a beautiful woman dressed in a dark-blue garment (just like the one that Arseny describes the poet Marina Tsvetayeva wearing in the poem “A Table Set for Six”) suddenly appears, demanding the boy take down a notebook to read a letter from Pushkin; the telephone rings, which the boy answers, speaking briefly to his father. Turning back, he notices that the woman has suddenly disappeared, leaving only behind the smudge of a fingerprint that quickly dries up. 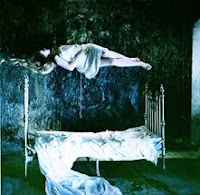 Throughout, Tarkovsky uses images—the burning structure, a pitcher of spilled milk, a levitating woman, and a stock archive shot of the first atomic bomb—that he will use again in his final film, also about family life, The Sacrifice.

In fact, that same title might almost have worked for this beautiful film as well, being as it is, a study in the sacrifice of the ordinary lives of human beings at the alter of art. Art, that often distorted mirror of life, has no room for the joyful loving, breathing, and tortured beings of the real world. Is it any wonder that, at one point, the young Ignat steals from his father an expensive book of major art drawings and leaves it in the woods to be destroyed by nature?

Posted by greenintegerblog at 11:12 AM