rules of the game
by Douglas Messerli

Although nearly all of Rainer Werner Fassbinder’s films are filled with comic moments and even comical subplots, one might suggest that one of his last masterworks, Lola, is the closest to being a true comedy. Certainly the work, at moments, veers to sarcasm and disgust for the petty scheming, fraud, backroom fixes, and other dirty works of the small German town’s haute bourgeoisie: the mayor, head of police, and other city leaders as well as the greedy contractor, Schuckert (Mario Adorf), who also owns the local whorehouse into which these “good” men escape most evenings. But, more often, Fassbinder’s movie chortles along with the naughty goings on—after all, it is just these activities that result in the building boom described as Germany’s economic miracle; and, as the local reporter later argues, even if the rich have stolen from the poor, it ultimately filters down to make the poor richer. 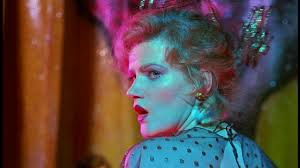 The whorehouse, where a great deal of the film’s events take place, has the feel almost of prewar Berlin, with sex (heterosexual and homosexual, as well as mixed groupings) taking place in the main room as well in bedrooms throughout the house. Perhaps taking a cue from theatrical productions such as Cabaret, Fassbinder’s director of photography, Xaver Schwarzenberger, has cast much of the film in garish candy-like colors: reds, yellows, lavenders, greens, and blues.
Although the club features a great many talents (particularly for such a small town), including a full orchestra with a drum-playing assistant to the Housing Inspector, its special feature is Lola (the amazing Barbara Sukowa): a mix of Dietrich in The Blue Angel, to which Fassbinder’s work tips it hat; Rita Hayworth in Gilda, whom Sukowa marvelously imitates after being outed by her secret lover as a whore; and Bette Midler. In short, Sukowa has it all: the transsexual allure of Dietrich, the breathy hedonism of Hayworth, and the gutsy, quick-thinking wit of Midler. She’s the kind of girl with whom anyone might wish to crawl into bed.
It’s no wonder she’s outraged by the possessive jealousy of both her lovers, Schuckert—whom, as Vincent Canby quipped in his original review, “she calls a pig and frequently means it”—and the drum-playing government employee Esslin (Matthias Fuchs). Upon hearing about the new man in town, Housing Inspector Von Bohm (Armin Mueller-Stahl)—a principled fool a like like Gogol’s Government Inspector who descends upon the small community as a man torn between high ideals and his humanist good intentions—Lola becomes intrigued. His job, after all, is to help bring the new German economic miracle to such outlying communities filled with just such crafty foxes, and she senses, surely, that this is the time get in on the rewards.
Mueller-Stahl is an excellent actor, but the way Fassbinder sets up Von Bohm’s entry, the actor might have acted the part while being asleep. Lola first hears of this man of noble heritage and handsome demeanor from her own mother, who has just been hired to be his housekeeper; Schuckert has heard some of the same things, repeating them to Lola, and arguing that the new Housing Inspector is the kind of man who kisses the hands of the women he meets, while assuring her that she would never merit such a gallant response; Esslin simply tells Lola that Von Bohm is not the man for her. Is it any wonder that the quick-thinking and somewhat soulless (qualities expressed by Lola herself in the first few moments of the film) temptress changes course? She bets Schuckert several cases of champagne that Von Bohm will, in fact, kiss her hand as gently as that of any others, and quickly proves it by arriving at a war memorial ceremony officiated by Von Bohm in a bright red car, which she exits, and in an elegant dress and white gloves walks up to him to present herself—holding out her hand, of course, so that he has no choice but to do what comes naturally.
The audience also cannot help but to root for this brazen enchantress, and is soon rewarded by the hussy’s attempt to lure the slightly prissy town official by pretending to study up in the town library on Ming vases, one of which Von Bohm features in his house.
Within the space of a few frames, the city officials get their first face-to-face meeting with the new man, while Lola meets him for a country stroll, far away from the spying eyes of others. So taken is Von Bohm with the beauty that he orders up a ridiculous English hiking suit which even Lola dares to describe as unnatural given his usual conservative attire.
Lola successfully seduces Von Bohm, in part, by singing a gentle round with him in a country chapel, dressed in a handsome white dress with small black dots—a gown that in the  year before these events are said to have happened, 1955, which might have been worn by the fashion savvy Lisa of Hitchcock’s Rear Window.
Just as Von Bohm falls for Lola, going so far to even buy her an engagement ring, the activist Esslin, disappointed with Von Bohm’s mild reaction to the city leaders and Schuckert’s evil actions, decides to show his boss the darker “side” of the community, taking him into the whorehouse at the very moment that Lola is about to sing. It is his discovery and outrage that sends her over the edge, performing the Rita Hayworth standard as something closer to a striptease.
In revenge, Von Bohm searches all city records in which Schuckert and the mayor have been involved, uncovering, as we might expect, a long history of kickbacks, illegal transfers, and other evil doings. When he announces that he intends to postpone all new building, city leaders secretly meet to determine their tactics. Helped by the idealist Esslin, Von Bohm builds a case against them which he attempts to leak—without success—to a local reporter. Even Esslin realizes that, in the morass of such corruption, Von Bohm cannot win, playing as he is without any rules.
As ever, Schuckert, who, more than anyone knows “the rules of the game,” immediately senses how to solve the dilemma, offering up the services of Lola to Von Bohm, and, accordingly, abandoning his claims to her.
As usual, he gets his way: Von Bohm marries Lola, who suddenly links the well-meaning official with the town’s ruling class (Lola has borne a child with Schuckert), while offering Lola the opportunity to join their ranks. The film ends with Lola being welcomed into the arms of Schuckert’s and the mayor’s nasty wives, after which she rushes off for one last fling with the town’s biggest economic wunderkind, a man who knows how to control both his compatriot’s pocketbooks and hearts.