force of nature
by Douglas Messerli 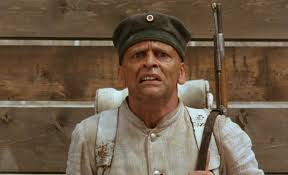 Although Georg Büchner’s 1836 play Woyzeck (not published until 1879) has been performed numerous times since its 1911 premiere, there is still no one consistent version of the play, although one might well argue that Werner Herzog’s film of 1979 is as coherent as any. For Herzog, Woyzeck, although clearly almost mentally retarded, is also a deep, if easily confused, philosopher, trying to comprehend his demeaned position in the universe while also being sensitive the frightening natural signs and omens only he is able to hear and interpret.
Yes, this Woyzeck, like the character often presented on stage, is maltreated by the surrounding society, tortured by his military superiors for his slightly deranged appearance (who else by Klaus Kinski could look out at the world with such a totally mad stare?); scolded by the local captain for his constantly hurried activities and his inability—as the commandant has perfected—to congratulate himself as a “good” man; and experimented upon the local doctor, a perverted quack determined to theorize his paid patient into madness, in part by insisting that he live on a diet of only peas! Yet Kinski’s Woyzeck somehow seems to good-naturedly put up with all of this. Rather than suffering primarily from the societal and political inequities of his life, Kinski’s Woyzeck seems more terrorized by the metaphysical rumblings that come from within.
As a man of nature, Woyzeck, in Herzog’s telling, is forced to stand up for himself in a world that is utterly self-controlled—revealed in the film’s beautiful images of the small town in which the events take place—and, equally, thoroughly boring. Woyzeck’s problems, and our fascination with him, emanate from the fact that he cannot control anything; not only is he hardly able to pay for food and rent, but has no control of his temperament and body. Racing through the streets like a mad hatter, peeing in public against the town’s edifices, hurrying through the activities he is forced to undertake (including a terrifyingly speedy application of a knife to throat and face as he shaves the captain), diving in and out of his own home to report his whereabouts to his wife and young son, Woyzeck is unrestrained, a born romantic locked into a petty bourgeoisie community of 17th century propriety and reason. We know from the beginning that it is only a matter of time before these two forces come crashing in upon one another.
The only ones who seem to calm Woyzeck, and clearly the only things of which this nearly hallow being is proud, is his beautiful wife (Eva Mattes) and his son. The only time he does not rush about, his eyes nearly popping from his head, is on a weekend stroll and entertainment in the town square, with his babe in arms and beautiful wife striding quietly beside him.

We already know that she is an unredeemed whore, but Woyzeck seems either not to care or oblivious to the fact. Rather, he is proud of his little family whom he does his best to support. Marie, it is clear, is also a creature of nature, but in her case, in fits all too well within the structures of this hypocritical community. Marie is smitten with the most pompous of the local folk, the local Drum Major (Josef Bierbichler), an overdressed, high-strutting ass of a man, who is only to ready to take over of the most beautiful in town; stealing her from her husband out from under his gentle gaze of adoration, the dazzling monster might almost be described as raping her, if it were not for the fact that she somewhat passively accepts his actions.
It is only days later, when both the doctor and captain come together in discussion and, encountering Woyzeck along the way and teasing him about his wife’s improprieties, does he apparently realize that has been cuckolded. Rushing home, Woyzeck attempts to observe some evidence of his wife’s infidelity, as if cheating and lying must be visible to the eye. He cannot comprehend that his world is unnatural one, a world that does not reveal what it is but hides it, covers its truths over just as have the captain and doctor attempted to qualm and theorize their way out from their horrible actions. The captain insists that he has become a military man to prove that he is good. The doctor sees the entire world as representing proof of what quack theory that enters his mind.


But the foolish Woyzeck, more of a real man of science than either of these men, must see evidence, which soon after he discovers by watching his wife vigorously dancing in the arms of the Drum Major in a local wine hall.
The madness that Woyzeck has feared all along descends upon him, and, just as Marie cannot resist her nature, so Woyzeck cannot resist his madness, buying a knife from the local Jew in order to kill the only being he loves. The murder, although totally brutal, is presented by Herzog in restrained operatic conventions: we see only the blood, which, like Macbeth’s wife, Woyzeck cannot wash away from his body, drowning in the lake as he attempts to do so.
Since this Woyzeck is tortured less by mankind than by his very nature, there is no need to suggest a trial, which, in any event, is a scene that Büchner never completed and, perhaps, never even intended. In Herzog’s vision this desolate little community should never be able to judge the man from another time and place. Rather, let them take their joy in the event, the most exciting thing that they might ever have experienced.