Superficially, Thomas McCarthy’s 2015 film Spotlight bears resemblance to Alan J. Pakula’s 1976 All the President’s Men. Both films deal with reporters from major American newspapers who, under duress and even threats uncover hidden information that diminish the influence and stain the reputations of major institutions, in the case of the earlier film, the American presidency, and in the more recent film, the Catholic Church. In the cities in which their respective powers dominate, Washington, D.C. and Boston, the citizens time and again, ignore and forgive the despicable crimes of their political and spiritual leaders, and it is only the ferocity and determination of good journalism that reveals the truth. 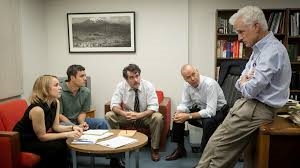 Yet these films are vastly different in tone and significance. The Pakula work centers upon two cub reporters working together against almost impossible odds to not only discover the truth but to “make” their reputations, and in those attempts they take far greater chances and are forced to work far more quickly that the reporter-team, working for the Spotlight column of The Boston Globe. Pakula’s film, accordingly, is far splashier and energized as the two, with the help of the beleaguered newspaper publisher, hone in on the shocking development that leads directly to the guilt of the President of the United States.


Spotlight, on the other hand, is not only an ensemble piece of film-making, but is about an ensemble of journalists, working together as a team. McCarthy’s film, accordingly, circles in on its final subject, ruminating, questioning, challenging and doubting its own revelations as it moves through a series of investigations that include not only the priests who have abused children, but those who have suffered that abuse, their families, and the lawyers involved on both sides of the quick settlements between the suffering families and the church.
Whereas All the President’s Men worked a bit like a quick peeling of an onion to get to its rotten core, Spotlight begins with a core that demands the team put the layers of reality back into place around it in order to perceive the very structure of the whole.
The writers and directors of Spotlight might have easily made a splashy film revealing the names of priests and the cover-up of their behavior by Boston Cardinal Bernard Law (Len Cariou), but have fortunately determined to see the larger picture, exposing not only the individual situations but the larger corruption of the church as a whole and the contagion of its church-going flock. Within nearly specific is a network of family and community members, church supporters, priests, church leaders, law-makers and, yes, even reporters who fail the young boys and girls internationally, abetting in the selfish sexual actions of individuals who pretend to represent just the opposite.


All of this might never have occurred, however, with the stimulus of change—the arrival at the Globe of a new, no-nonsense and quietly reflective editor, Marty Baron (Live Schreiber), a true outsider, a Miami-Jew suddenly in charge of the women and men of the Spotlight, who, even if they have not grown up in Boston, who seem themselves at home in their city. Sacha Pfeiffer (Rachel McAdams) may have grown up in Ohio, but her mother had connections with the city, and her aunt is a stolid church-goer. Michael Rezendes (Mark Ruffalo), of Portuguese extraction, may not represent the more standard Irish and German Catholic churchgoers, but as a child he enjoyed church, and grew up, nonetheless, in the Boston milieu. Ben Bradlee, Jr. (John Slattery), Matt Carroll (Brian d’Arcy James), and Walter “Robby” Robinson (Michael Keaton) might even be described as good ole boys in the Boston inner community, Robinson even attending the large Catholic school across the street from the Globe’s offices. As the Armenian-rooted attorney Mitch Garabedian (Stanley Tucci) observes of Baron, it takes an outsider to want to pursue this subject.
And it is the moments throughout this film when each of these characters and others realize their complete entrenchment in the complacent society around them that we become involved in the film, becoming uncomfortable with easy assumptions. In the midst of seeking out the name of priests described as “on leave”—one of the several terms church leaders use to describe priests who have been found guilty of child abuse—Carroll discovers that one of the houses caring for the guilty priests, sits a few yards away from his own home, and rushes home to warn his own children with a refrigerator announcement. Pfeiffer is forced to keep her painful research secret from the aunt with whom she lives, and suddenly finds herself psychologically unable to attend church once a week with her. Rezendes is haunted by the fact that the files he discovers have long been available, but have been illegally frozen from public view. Robinson gradually perceives that one of the pedophiles was a coach in his own high school, and that one of his victims was a school friend of years earlier.


Robinson’s old friend, Jim Sullivan (Jamey Sheridan), moreover, turns out to have been a lawyer for the multitudes of cases of small church settlements, linking him, finally, to over 70 local priests. And by film’s end, through the accusations of the public defender, Eric MacLeish (Billy Crudup), Robinson discovers that he, himself, has been guilty of refusing to pursue a story when he was editor of the Metro section that at least 20 Boston-based priests had been involved in pedophilia.
Their’s and the entire community’s failures to pursue the claims of those who have suffered from these terrible sexual acts have helped to embitter the small survivor’s group (SNAP), headed by Phil Saviano (Neal Huff), as well as attorney Garabedian, who has worked tirelessly to help afflicted families without getting any significant judicial response or communal recognition.
Even more remarkably, however, is that this carefully wrought and morally significant film not only ultimately points to the community in which these real events first came to light, but to the Catholic Church throughout the world. That the newspaper’s 2002 and 2003 analyses of what it had previously failed to explore received no response from the Church leaders and that the film was positively reviewed in several religiously-aligned newspapers suggests that, finally, the Spotlight’s ensemble reporting had a true effect on church and society.
If such events will surely continue to happen in the future, we can at least hope that journalists and city leaders will no longer be able to bury them in print or hide them from their public filings.
Ultimately, if the events recounted in All the President’s Men resulted in the downfall of a somewhat paranoid President Nixon and his advisors, Spotlight traces a larger arc in the possible resolution and admission of guilt for the thousands of young people robbed of their social innocence and spiritual faith. Possibly, the church may even find a way to help these people to begin to believe in it once again.