Alex Gibney | Going Clear: Scientology and the Prison of Belief

a murky vision
by Douglas Messerli

A bit predictably and far less complexly and fascinating than the Lawrence Wright book upon which it was based, the movie Going Clear: Scientology and the Prison of Belief, directed by Alex Gibney, explores—as have numerous other such investigations into scientology’s strange beliefs and alleged mistreatments of some of its believers—the history and values of the highly litigious institution. 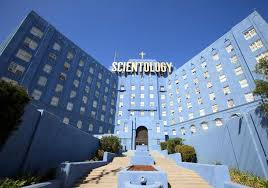 Interviewing eight former Scientologists: the Oscar winning director, Paul Haggis; the church’s former second-in-charge, Mark Rathbun; the former head of the organization’s Office of Special Affairs; actor Jason Beghe; church liason with John Travolta, Sylvia “Spanky” Taylor; as well as three former ordinary members, Tom DeVocht, Sara Goldberg, and Hana Eltringham Whitfeld.
Divided into three parts, these former Scientologists begin by describing how they came to join the “church,” their reasons being often quite different, but ultimately sharing their “need” to find spiritual fulfillment and their being lured into the group through promises, the attractions of a belief based on confession and self-improvement through readings of the quite explicable E-meter readings, and through the celebrity of certain members such as Tom Cruise and John Travolta.
The second part gives a far too quick summation of founder L. Ron Hubbard’s very strange beliefs as expressed in his science-fiction books and Dianetics, as well as a series of formerly secret beliefs that are revealed as one continues along the path leading to “going clear,” a process that depends upon paying for years of continued study and E-meter readings. Through that process, moreover, the church comes to know and, apparently records, nearly all the information that its members are encouraged to reveal about themselves, often, as the third part, explores using that information against the individuals.


The film argues, quite convincingly, that church leadership, particularly David Miscavige, has continued abusing church members through verbal intimidating, beating, imprisonment, and exploitation. Some members are forced to sell themselves and their children to the church for decades, and are forced to work for extremely small amounts of money. Others, particularly senior executives who seemingly cross church teachings or rulings, have been locked away on a floor of the large Hollywood Scientology building in an area known as “The Hole.” Others are taken to desert locations and imprisoned for years.
The film discusses particular situations wherein Tom Cruise’ former wife Nicole Kidman was targeted for wire-tapping by the organization so that they might break up her and Cruise’s relationship. “Spanky” Taylor, personally “in charge” of John Travolta, hints that when Travolta attempted to leave the church, he was forced to remain out of fear that some of his personal life—presumably of a sexual nature—might be revealed.
If Miscavige is portrayed as the grand villain of this work, it is Cruise who, in several film clips is shown at major church conventions denying outsider accusations with a broad Cheshire cat-like giggling grin, comes off as a complete fool, utterly taken in by the organization’s incoherent philosophies and brainwashing behavior.
While I discuss these issues in more detail in my essay about Wright’s more intelligent book, the film successfully—and with a far broader audience, more inclusively—asks people to think about not only Scientology but about organizations which demand such absolute beliefs.
Yet much of what it reveals has been stated before, in just as frightening details. The fact that the Scientology organization continues attempt to sue directors such as Gibney and Wright, and to put pressure on television networks and even reviewers seems merely to reiterate that what is being revealed, yet again, has behind it a great deal of truth.


In the late 1990s a young man came to me, asking if I might be interested in publishing a work he was planning that would reveal devastating information about Scientology leaders and their beliefs. He had, evidently, served in the executive branch, and had been located in a desert compound where he had seen numerous beatings and imprisonment of church believers who had begun to have doubts. Over several meetings in public bars and restaurants he presented a quite paranoid demeanor as he whispered out some of his painful memories. He explained if I were to undertake this book, I would be the subject of church attacks and probably would be sued, but if I was willing to take a chance, he would write up the material. His wife and he had both been threatened, he explained, and the church had attempted to break up their marriage and take away their child. “If someone overhead us, we might be in danger for our lives,” at one point he interrupted my reactions.
Although I was fascinated with his stories, and would have been willing to even suffer the attacks against me, as a single-person publishing house with hardly any money, I would not have been able to deal with their litigation, and, I was afraid, the book might never be published. Moreover, I feared that this particular individual just might be able to properly write his story; certainly I have no way of vetting the truth of his tales.
Wright’s book, along with Gibney’s film, accordingly, represent important steps in revealing the corruption of this group—which is clearly misusing the religious exemption granted to it after years of attacks on and lawsuits threatened against IRS government investigators—but I fear that this wealthy cult will continue in its activities, particularly when Hollywood celebrities such as Cruise blindly continue to help fund it.

Posted by greenintegerblog at 10:43 AM