a revenge comedy
by Douglas Messerli

It continues to annoy me that many critics perceive the great filmmaker Luis Buñuel as a basically immoral rebel fascinated by sadomasochism. In reviewing his 1970 film, Tristana, the usually level-headed Roger Ebert even goes so far as to write:

The subject matter came out of his own lifelong ob-
sessions. His favorite subjects were sado-
masochism and anticlericalism ever since his first
movie with Salvador Dali, Un Chien Andalou (1928),
and in the late flowering of his work in his 70s he
became undoubtedly the dirtiest old man of genius
the cinema has ever produced.

While it is clear that the director was virulently anticlerical,  given the tradition of the Spanish church leaders and involvement with the military right and continuation of the most patriarchal of cultural values, his position should be seen as a thoroughly moral one. And, yes, a great many of his films seem fixated on sado-masochistic situations, particularly Virdiana and Belle de Jour, the latter of which also stars the heroine of Tristiana (the beautiful Catherine Deneuve), but it is not Buñuel, I would argue, who is trapped in these often morally reprehensible situations as are the characters of his works, all products of the corrupt societies he clearly exposes in his films, particularly in works such as Exterminating Angel and The Discreet Charm of the Bourgeoisie. 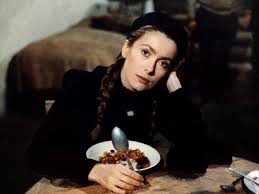 Don Lope Garrido (Fernando Rey), the reprehensible figure at the center of Tristana is ostensibly a model figure of the 1920s in Toledo. A liberal man of a wealthy childhood, Don Lope is a polished aristocrat without aristocratic affectations, himself refusing to work because of the evils of industrialism. His intellectual support is for the down-trodden and working class, and he later hires the street urchin, the deaf, trouble-maker Saturno (Jesús Fernández), whose mother, Saturna (Lola Gaos), works as his cook. His public problem is that is slowly running out of money, and must sell some of his cherished possessions to support himself and his staff.
Don Lope’s secret problem is his attitude toward women. A staunch supporter of open sexuality—he has sex only if we can get the woman to agree—the hedonist dandy believes in open relationships, refusing to be tied down by marriage.


Left an orphan, the young Tristana is adopted, through the directive of her dead mother, by Don Lope, and at the age of 19 sent to live in his house. Although he first treats her as a loving daughter, as the innocent girl begins to flower into adulthood he grows more and more lustful, finally “receiving” her permission to rape her through a kiss. What he cannot or will not comprehend is that given his role in her life and the lack of alternatives for the girl, she has choice but to accept the sexual advances of the old man, although she increasingly finds him abhorrent. As she tells her confident, Saturna: if only he had been able to keep the relationship as a familial one she have loved him and been able to serve him as a dutiful daughter.
As it is, she increasingly seeks a way out of what he defines an “open” relationship. Ignoring his desires, she daily takes long walks through the streets, meeting a handsome young artist, Horacio (Franco Nero), with whom she quickly falls in love. After several trysts, she determines to leave Don Lope and run away with Horacio. Despite Don Lope’s discovery of their relationship, and his attempt to challenge Horacio to a duel, the two do escape the city and have an apparently happy relationship for at least two years, without marrying, since, like Don Lope, she now believes that love is more important than the patriarchal institution that binds women to their spouses.
When Tristana develops a leg tumor, she inexplicably insists that he take her back to Don Lope, who has now come into a large inheritance through death of his hated sister. We later discover that Tristana’s insistence, however, may have been a test of Horacio’s love and his ability to care for her. As it is, she moves back into Don Lope’s house, as the two men arrange meetings between Horacio and Tristana, while the old man ludicrously hopes to bring her back into his bed, particularly since Tristana has now had her leg amputated, trapping her, at least symbolically, within the relationship. Unable to deal with her amputation and with the increasingly angry woman, Horacio soon leaves the city.
By this time Tristana, bitter about the way she has been treated by both men, has come to rule the house, particularly since the aging Don Lope no longer has the strength to oppose her. Don Lope even begins to attend mass with her, finally going so far as to marry her. Soon after he, the long-time hater of the Catholic clegy, invites the priests to his house for cocoa and sugar, while they attempt to coax him into leaving money for the church.
At moments, the now chaste Tristana, toys with her servant, opening her breasts to him as he works beneath her balcony, forcing him to back off into the woods to masturbate, something he has comically accomplished in long-closed bathroom scenes throughout the film.
When one night, Don Lope cries out while suffering a heart attack, Tristana comes rushing to his side, pretending to call the doctor and, when she determines he is near death, opening his bedroom window to the cold night air, closing it again shortly before the doctor arrives to announce his death.


She is now the inheritor of Don Lope’s estate. In short, Tristana, although beginning the film as a victim, gradually becomes a kind of feminist heroine in control of what in her culture is nearly always male-controlled. Yet, obviously, we are forced to ask, is it worth all the suffering and pain she has experienced? Although, at film’s end, Tristana is very much control of her world, she has no one to share it with, and will likely live out her life in the kind of bitter coldness that we have witnessed in Don Lupe’s sister. Revenge is hers, but it is a comic revenge, with her, unfortunately, ending up as a kind of stock figure, the former beauty having been transformed into a kind of beast. Although Tristana has won the battle of the sexes, Buñuel shows us that she has lost her moral ground in the process, sadly inevitable, perhaps, in the patriarchal society in she exists.