Andrew Haigh (writer, based on a story by David Constantine, and director) 45 Years / 2015 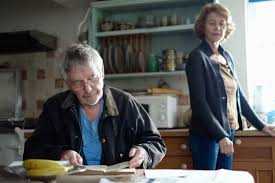 One of the best of movies of 2015 was the beautifully filmed, brilliantly acted, yet understated work by British director Andrew Haigh, 45 Years. The title represents the number of years the central couple of this film, Kate and Geoff Mercer (Charlotte Rampling and Tom Courtenay), have been married. They might have celebrated their 40th wedding anniversary except that Geoff had sudden by-pass surgery. Accordingly, the movie begins with their plans to publically celebrate their 45th, with Kate checking out the space they have rented for the occasion.
Returning home, she encounters the local mailman, evidently a student of hers when she previously taught school, who delivers a letter which almost immediately upends the everyday patterns and comfy structures of their lives, which the director has already established from the very first moments of the film.  The letter, written in German, reports that, due to global warming, a Swiss glacier has partially melted, revealing the frozen and still-intact body of Katya, Geoff’s youthful girlfriend who fell into a glacial fissure while the young couple were touring Switzerland in the 1960s.


Although, Geoff has told Kate of his early affair with Katya, his reaction, and his open admission of details he has not told her, begins to unsettle her. At first, both husband and wife appear to perceive that this long-ago event will have very impact upon their solid and long-lasting marriage. But gradually little details about Geoff’s past relationship create new fissures into which Kate herself may fall. The similarity of their names, the fact that they both share the same hair-color, and Geoff’s revelation that he is considered next of kin, since Katya and he felt they had to pretend marriage in order to stay together in local homes and hostels, along with the fact that she indeed did wear a small wooden ring he have given her, all seem to signify to Kate that it was not simply an innocent youthful romance.
Geoff’s suddenly withdrawn behavior, a nightly visit to his loft-hidden scrapbooks in search of Katya’s photograph, and other oddities peak her imagination and force her to reconsider what their relationship has meant after all these years. Obviously, for both, the sudden collision of the past with the present and their own obvious lack of mementoes and drifting memories help contribute to what gradually grows in a crisis of identity within themselves.
While the young Katya’s body remains just as it was years before, Geoff is now a somewhat doddering elderly man, and the recognition of that fact throws him into something like a mid-life crisis arrived too late. The very power of these changes in her husband also leads Kate to wonder even more about her husband’s early behavior, forcing her to ask the important question: whether or not, if Katya had lived, might Geoff have married her. “Yes,” he admits, they would have been married.


It is almost inevitable that she must wonder who she has lived with all these years, and that she suddenly must see him from a very different perspective. As she later berates him, she has discovered that, unknowingly, she has been living all of these years with the perfume of a ghost in the house, the ghost lover with whom, indirectly, Geoff has been living out his life. As a former executive in a cement company, Geoff obviously has cemented up his past in his behavior with his wife in the present.
When Geoff, just a day before their planned anniversary celebration, wanders off to the nearby town for the entire day, Kate, climbing into the loft to revisit her husband’s scrapbooks and collection of slides, puts the slide carousel on display to uncover not only Katya’s youthful beauty but to discover the wooden ring on her hand, perched upon a stomach that suggests that the girl may have been pregnant. Was the decision that Geoff (and Kate) made not to have children based on that fact?
I need mention that none of this is actually said, and my perception of it, through Rampling’s remarkable acting and Haigh’s crafted images, may or may not represent a misconception of events; but then Kate’s own interpretation of her husband’s behavior and what she sees may be equally a product of her misinterpretations. But certainly it is significant that when Geoff finally returns home Kate expresses her impossibility to speak of her complete horror of what she believes she now perceives: that much of the life they have together defined was based on Geoff’s love of Katya.


Both become determined, nonetheless, to not reveal their crisis to others, and Geoff, in particular rises to the occasion, lovingly sharing their marriage day with Kate, and at the celebration voicing the appropriate sentiments, arguing that, as we age we make fewer important decisions than we do when young, while admitting that the best decision of his life was to marry and live with his wife. As Kate’s friend Lena (Geraldine James) predicts, Geoff breaks down in tears. The couple dances to the song they performed at the wedding, “Smoke Gets in Your Eyes,” a scene of remarkable sentiment for the fictional celebrants and audience both. But immediately after, as Geoff raises their hands in acknowledgement of their survival, Kate quickly drops her arm, as the camera studies her face upon which she flashes all the fears, anger, frustration and possible forgiveness that the future may offer up. She is so successful in equally conveying all of these emotions in just a few seconds that we cannot possibly imagine what choice she or Geoff, in reaction, will make; and the future, it is clear, is as much dependent upon her and her husband’s elderly decisions as it was in their youth.