too many confessions
by Douglas Messerli
George Tabori and William Archibald, based on a play by Paul Anthelme) Alfred Hitchcock (director) / 1953
Alfred Hitchcock’s I Confess!—which I saw again yesterday, many years after first seeing it—so I realized this time through, is a film not only about one man’s confession, but demands the confessions of nearly every figure in the film, save the central character. 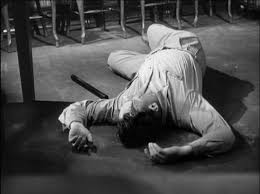 Beginning with a sort of tongue-in-cheek series of clues about who is pulling the strings of this would-be murder mystery, the director repeatedly offers up signs referring drivers which way to maneuver their cars through the old quarter of Quebec: each declaring “direction.” This is immediately followed by an image of the Hitchcock, himself, crossing a bridge at the top of the screen. In short, the director comes clear—one is tempted to say “confesses”—from the very beginning of his tale that he is not only in control of his cinematic “puppets,” but will manipulate them and his story, just as they attempt to manipulate one another.


Although the film first suggests it might be a noir, displaying a dead body, followed by what appears to be a priest walking through the darkened narrow streets, followed by two young school-girls (who also later testify), the director immediately shifts gears, as the man (Otto Keller, we soon discover), by removing his cassock, makes it clear that he is the murderer and that he is no priest.
Entering a nearby cathedral, he demands the priest—for whom, it quickly becomes apparent, he also works for Father Logan (Montgomery Clift)—hear his confession, proceeding to wipe away any of the plot’s mystery by admitting that he has just murdered the lawyer, Villette, upon being discovered attempting to steal his money.


The fact that he does confess, is absolved, and claims he had sought the money so that his wife will no longer have to work, also helps to make the audience somewhat forgive him him somewhat in the mind the audience, particularly, when, soon after, the story reveals that Villette is vile man, guilty of tax fraud, who has attempted to blackmail the heroine of our tale, Madame Grandfort (Anne Baxter).
However, when we observe Father Logan, himself, visiting Villette’s house soon after the body’s discovery (deceptively “found” by Keller, who also works as a gardener for the lawyer) temporarily arouses our curiosity about his involvement, particularly when he meets Madame Grandfort on the street in front of the house soon after, announcing that since Villette has died she is now “free.”
But as quickly as Hitchcock has suggested that the priest and married woman may be having an affair, that fact is laid to rest as Grandfort, herself, confesses to her husband and, soon after, reveals the true nature of her relationship with the priest at the request of the police inspector Larrue (Karl Malden). By the time she finishes her “confession” we know nearly the entire story of her long ago love for the priest before he had become ordained and we learn about the night they spent in a gazebo (apparently without having sex), after being caught in sudden rainstorm. By coincidence, the country house also belongs to Villette who, encountering the two and recognizing Madame Grandfort (her husband is a major government leader), greets her as Madame, revealing to her former boyfriend that she is now married.
However, by admitting that they had once been lovers and that she was being blackmailed by the victim, she only further forces the police to suspect Father Logan.


The director, accordingly, quite obviously moves his story in several different directions, just as he has done in the first scene, piling on confession after confession which keeps altering the course of his tale while simultaneously deflating any elements of mystery his film might still possess and pointing to the guilt of the most innocent character in his film. Quite the opposite of what happens in most murder mysteries, in I Confess! everyone confesses, which causes greater confusion than if no one were to say anything.
Finally, we are left with only one plot question: will the priest be found guilty simply because he is the only character who cannot confess, since is bound to the confidentiality of the confession box? But even here Hitchcock pulls the rug out from under what we might have expected of the story by having his “tortured” innocent character “not guilty!”


Yet Logan has been found guilty by the public at large, and it is their harassment of him upon leaving the courthouse that leads Keller’s wife, Alma (Dolly Hass) to provide yet another confession as she attempts to tell the police of her Keller’s guilt. Her husband kills her, but in so doing, he, this time unintentionally, “confesses” yet again, drawing the police into a chase which finally ends in his death.
In the original play, Father Logan and Madame Grandfort not only had an affair, but an illegitimate child, and Father Logan was executed. But both local censors and the Warner Brothers studio heads thought it was too controversial, forcing Hitchcock to change the story.
Frankly, in this case, I feel that the conventionality of their decision works much better. The irony of the situation, that it is an innocent man who cannot tell his version of the truth, makes for a much stronger moral situation; and the fact that Logan survives the impossible bind, only further demonstrates his existential condition, wherein he cannot morally act given the necessary silence of his role in the church. Certainly, Hitchcock realized that for many Protestants, the Roman Catholic priest’s silence might be difficult to explain, and even wrote a note attempting to explain the position of the church in he had grown up in.
Hitchcock’s focus on the handsome Clift’s dark, deep-set eyes—through which he centrally  expresses his reactions to the dilemma his character faces—and his close-ups the actor’s so sensuous lips, helps to represent the character as a figure emotionally bottled up in silence. It is probable that the director also knew of the actor’s own silence regarding his homosexuality, which certainly may have contributed to Clift’s intensity, seemingly further isolating him from all those constantly talking, confessing beings surrounding him.


Posted by greenintegerblog at 8:50 AM No comments: