Godard’s most accessible film, Band of Outsiders (or The Outsiders) (1964) might almost be read, at moments, as a rechanneling of his friend, Truffaut’s Jules and Jim (1962), if he hadn’t already directed Breathless (1960), a far more artful study in “outsider” behavior. Of course, Truffaut also did something similar as early as his 1959 film The 400 Blows. In each case bad boys or young men pretending to be bad boys, all of them influenced far too much by American gangster movies and Hollywood Westerns, seek out trouble, taking their girlfriends along for the ride.
In nearly all of these films just plain fun is intermixed with dangerous anti-social behavior which ends in death or, at the very least, incarceration. And what was just a lark is transformed into varying statements on societal destruction of the individual which results in robbery and violence against the seemingly deserving society at large. 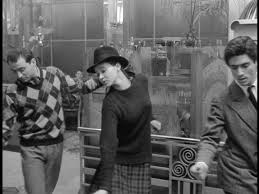 But then Godard—at least in my estimation—is a far more profound thinker than Truffaut, and his “bad boys”—in this case Franz (the beautiful Sami Frey) and Arthur (Claude Brasseur)—are, like Jean-Paul Belmondo in Breathless, diffident decadents, unlike Truffaut’s more well-meaning and certainly more well-intentioned delinquent child-men.
In both Band of Outsiders and Jules and Jim, the characters are trapped in a three-way romance in which part of the characters dangerous actions betray their romantic and romanticized relationships to one another. Jules, Jim, Franz, and Arthur all love their male counterparts, yet despite that fact attempt to outdo each other once they become attracted to the same female, in Jules and Jim’s case, Catherine (Jeanne Moreau), and in Godard’s film, Odile (Anna Karina). If the homoerotic elements so apparent Truffaut’s film are far more muted in Godard’s work, it is only because makes their relationship apparent when Franz tells his friend all his secrets, including his budding relationship with Odile and the fact that she has told him her aunt, Madame Victoria (Louisa Colpeyn) has a great deal of money, illegally got by, presumably her sexual partner, M. Stoltz, lying about in an open cabinet. Although their famous “group” dance of “The Madison,” might be perceived as an attempt to share Odile, it is also a statement about their own shared commitments, not so very different from those of Jules and Jim, who work out in the local gym together and are known by nearly everyone as close “friends.”
In fact, I would argue, it is the open eroticism of the ménage a trois relationships of both films—which put their characters in the position of children playing seemingly infantile games such as “house” or “doctor”—that allows us to accept the seeming “innocence” of figures who might otherwise be perceived, particularly in the US, as petty street thugs or outright villains. And it is their innocence which also attracts them to the American films they act out, and which allows us to perceive that they cannot tell the difference between fiction and reality. Godard’s figures are loveable children, line-dancing in a local bar, racing to beat the record of San Franciso’s Jimmy Johnson in racing through the great French art museum, the Louvre, and openly flirting with Odile. And we can hardly be so shocked by their determination to steal M. Stoltz’s unhidden money, when he has stolen it, in turn, from the government in tax fraud.
The real villains in this film are Arthur’s uncle, who, hearing of their plan, demands a share of the take, and, ultimately, Arthur himself, who betrays his friend’s trust by bedding Odile and, later, having figured out where Stolz has hidden the money they intended to rob, returns to collect it without the other members of his trio “band.” Godard also makes it clear, early in the film, that Franz is the right man for Odile, not Arthur, particularly when Arthur cannot make the liquid flow from one side of her “love tube” to the other. Besides, Franz is cuter and better dressed than his always sweater-wearing, slightly overweight friend.


But the consequences of his betrayal, a melodramatic shoot-out between Arthur and his uncle, which ends in both of their deaths, seems out of proportion to their foiled gangster-like misdeeds. Even if the outsider band think they have accidently killed Mme. Victoria, Godard’s long lensed camera reveals that she has survived the ordeal, and will now surely share in the reclaimed money with Stoltz.
As Franz, driving away with Odile, proclaims, however, they too have not done so badly. With Arthur out of the way, they can travel South on their way to Brazil, knowing that, as Odile’s “love tube” reveals, Franz is able to make the liquid flow her way.
Godard’s figures understand themselves as fictional characters, whereas Truffaut’s figures seem to forget the game they are playing and end up more tragically for that fact. Band of Outsiders even announces that the adventures of Franz and Odile will be portrayed in an all-color sequel—perhaps, one might imagine, realized in his 1965 film Pierrot le Fou.