voyeur to the cannibal feast
by Douglas Messerli


Luis Buñuel’s Robinson Crusoe is a far more pitiable character than even Defoe’s isolated survivor. Often using a voice over reciting Defoe’s own language, Daniel O’Herlily—nominated for an Oscar for his portrayal—details his disobedience of his father in leaving home in his determination of traveling to Africa to bring slaves back to Brasilia. A terrible storm scuttles his ship, killing all of his onboard companions, as he miraculously swims to a nearby island. 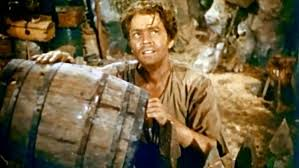 Indeed his salvation seems God-sent when he discovers that a portion of his ship has lodged itself only a short distance away on an outlying rock, allowing him to retrieve food, tools, wood, guns and, just as importantly, the crews’ cat Sam and dog, Rex.


Although, in his slave/master culture, Crusoe has not previously needed to know many labor skills, he soon manages to build himself a kind of cave dwelling, fortified by a home-made construction of a wall. By penning up some local island goats, he provides himself with milk and meat. He shoots fowl and wild boars and, after discovering a few grains of wheat growing outside his door (presumably, carried as a few seeds with him from the boat to his isolated island) he is able to grow a crop and bake bread. Turtle shells provide bowls, and after a few years, he is even able to create his own ceramics.
Yet it is the lack of human company which tortures this Crusoe, particularly when he becomes sick and lies dreaming in a fever in which he calls up the image of his unforgiving father. Crusoe is even more devastated after the death of his beloved dog. His cat, quite amazingly, seems to have found another of her species on the island, producing kittens, which, along with her, soon grow wild and leave him, predicting, perhaps, what will ultimately have to happen to him if he is to survive.
In order to maintain his sanity, Crusoe (even in this religious-hating director’s telling) has no choice but to read, over and over, the one book he has retrieved, the Bible. In his most lonely moment, he reads the Psalm of David (“The Lord is my shepherd; I shall not want.”) to the hills from whence his melodious voice echoes, creating an imaginary friend out of his own voice and God’s word. But, as he himself admits, soon after, dressed in furs and carrying an outrageous umbrella, he would appear as a terrifying figure in any civilized city.
After years of loneliness, he accidently discovers, one day, that the island is regularly visited by the most uncivilized beings we can imagine, cannibals from a nearby island who use his island to kill and consume their victims. And, in fear for his life, he is forced to watch the horrible ceremony, later retching when he comes upon their left-over skeletons. Although he imagines and even prepares a bomb for their eventual destruction, he determines not to destroy them—in part, it is hinted, because to destroy them would mean that he has no possibility for human connection.
The next time they appear, he observes through his trusty telescope that one of the two men they are about to kill, has escaped. As two of the cannibals attempt to chase down the escapee, Crusoe hits one over the head with a rock and shoots the second. When the first comes to, the escaped victim kills the other man himself.


The events I am describing, of course, for anyone who has read Defoe’s famed fiction, is Crusoe’s meeting with the man he calls Friday (Jaime Fernández). At first he is terrified that the man, who himself is used to eating human flesh, will attempt to kill him, and Crusoe quickly constructs a huge door which permits him to lock Friday out of his room at nights. The relationship between them predictably begins, since Crusoe’s open bigotry has already been established, as that of master and slave; when Friday sneaks into Crusoe’s room one night, the “master” immediately shackles his feet, much to the shock of the loyal servant. But by morning, Crusoe perceives that his Friday has entered the room more from curiosity than any ill intent, and determines to free him. A trust between the two soon arises, and together they create an even stronger settlement, both physically and, Buñuel implies, spiritually.
Yet the cannibals soon appear again, and this time they perceive that there are far too many of them to intervene, retreating to their fortress home. A sudden explosion draws them out to inspect once again, only to discover that Spanish sailors have come ashore, scaring the local natives off. Not so very differently from the cannibals, the newcomers—mutineers we soon discover—have taken two “loyalists” from their ship in order to tie them up and maroon them. Crusoe and Friday secretly cut the ropes which bind the “believers,” and help the two escape.


Luring the mutineers into their home, the four (Crusoe, Friday, and the freed men) surround them, forcing the other sailors to surrender. Crusoe orders them tied up, and escaping with the two “loyalists” back to the ship, leaves them behind with his book detailing how he has been able to survive. At least, he admonishes them, they will have each other’s company, which Buñuel hints will perhaps destroy them faster than had they each left to their own devices. Surely they will attempt to war with any returning cannibals.


Crusoe’s last great gesture is to ask his now equal friend whether—having just witnessed that the so-called “civilized” men are not so very different from Friday’s native companions—he still wants to travel with him to England. Friday commits to the voyage, willing to embrace a new world that, given his race, may be far more brutal than even than the one he has left behind. Obviously, he newfound friendship with Crusoe has provided more faith than the values of his past or those he might imagine to be provided by those to whom he is traveling. And it is now inevitable, even if unstated, that the two shall live the rest of their lives together.
Jaime Fernández, brother of the famous Mexican actor Emilio Fernández, was working as a film grip when Buñuel spotted him; apparently he did not know a word of English when the director began shooting his Robinson Crusoe simultaneously in both English and Spanish. The younger Fernández evidently learned to speak the language on the set, much in the same way (but surely more quickly) as the character, Friday, learned it from Crusoe. Certainly, his bronzed handsome look made a perfect foil for the virile Irish actor who had previously played in Shakespeare characters in Abbey Theatre productions.