A few days after watching the Netflix copy of The Quiet American I happened to turn on the Turner Movie Classics channel at the very moment when the opening credits for Joseph L. Mankiewicz’s 1958 cinematic version of Graham Greene’s novel flashed across the screen. How could I not watch it, particularly after reading of how angered Greene had been by this adaptation?

a fable of faith
by Douglas Messerli

Joseph L. Mankiewicz (writer, after the novel by Graham Greene, and director) The Quiet America / 1958

Mankiewicz’s The Quiet American begins well enough, with Michael Redgrave as the British reporter Fowler endowed with an even drier and more intense wit than Michael Caine in the same role. Although not a subtle actor, the heavily decorated World War II hero, Audie Murphy seems like a near perfect Pyle. And, if she is not quite as beautiful as Do Thi Hai Yen’s Phuong, Giorgia Moll has a quiet elegance that makes her quite believable as the woman torn between the two radically different lovers. 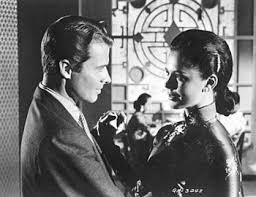 Although the version’s presentation of General Thè and Pyle’s relationship too him is so vague that it is hard, at times, to know what is to made of Pyle’s “third force,” and, indeed, throughout this film it seems more like a crackpot idea that having any possible meaning within the 1950s French Indochine world. In fact, Pyle seems throughout this work more like a bumbling Candide than a possibly dangerous force, and as such seems, a moments, like he should be rewarded “the girl.”
But that is just the problem with Mankiewicz’s infuriating vision; he has taken Greene’s ambiguous political tale and turned it into a simplistic love story, where Fowler, out of his jealousy for losing Phuong, coupled with his Old World cynicism is manipulated by the Communists into believing the worst of Pyle. And ultimately the director manipulates the audience into believing that Pyle was just that: a bumbling American Candide who is truly innocent. In short, this version takes all Graham’s outrage and turns in on its head, suggesting that the Americans of the period not only seemed guileless but actually were innocent.
What we are left with, accordingly, is a kind of moral fable, wherein we perceive that the believer without values ends up with nothing, with no moral ground and no girl. Indeed, awarded a divorce by his wife and permitted by his London paper to remain in Viet Nam, this Thomas Fowler will surely die in Viet Nam in complete isolation, instead of staying on to report the truth as Greene’s figure does in the cinematic remake.
Not only is this work dishonest but it is made from what might have been a powerful political statement into a little moral fable about faith. There has always been something openly crass about Mankiewicz’s films—the hang-them from the rafters nastiness of All About Eve, the stagey Southern gothic-ness of Suddenly, Last Summer, and the just awful travestry of Cleopatra—but why he bothered to convert Greene’s anti-American investigation into a pro-American diatribe, argued, moreover, by the local French police detective, is simply beyond reason. This work simply demanded a new and better adaptation—and fortunately got it.

Posted by greenintegerblog at 8:57 AM