Christopher Hampton and Robert Schenkkan (screenplay, based on the novel by Graham Greene), Phillip Noyce (director) The Quiet American / 2002

Phillip Noyce’s 2002 adaptation of Graham Greene’s The Quiet American is a sensual film with a kind of “ugly American” backdrop.  While superficially Alden Pyle (Brendan Fraser) may be a quiet American medic who “accidentally” falls in love with British reporter Thomas Fowler’s (Michael Caine) Vietnamese lover, Phuong (Do Thi Hai Yen), by movie’s end we come to perceive him as very loud self-aggrandizing mass murderer, in charge of a mission to interject the American forces into the long battle between the French and the Communists in Viet Nam.
While Pyle pretends to be a gentleman who claims to be able to speak only two words of Vietnamese, in truth he speaks the language fluently, and is secretly manipulating the self-proclaimed General Thé to create further havoc within the country so that the US will be forced to enter the political fray. And ultimately he usurps Fowler’s Phuong with the surety of a born conqueror. 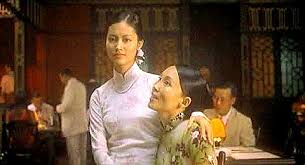 Yet Fowler, in his cynicism and passivity—he seems unable to imagine any alternative when his wife refuses his plea for a divorce—is also not a completely moral man; when we first meet him he has no moral point of view, he explains, and seems to send “reports” back to his London-based paper only sporadically (3 times in the past year). Many of his afternoons and evenings are spent by him and Phuong smoking cocaine. And, finally, Fowler is partly guilty in Pyle’s murder (Pyle is stabbed by Fowler’s office assistant on his way to dinner with Fowler).
Phuong, herself, has lived many years as a prostitute, working for her sister, who runs a dancing-dining establishment.
Although we come to see Alden Pyle as the most dangerous figure of Greene’s sad tale of the destruction of the Vietnamese nation and its people, there are no true heroes in his world. American advisors such as Joe Tunney and Bill Granger are presented as shady figures and drunks. Phuong’s older sister, far from being the “perfect saint” Fowler ironically describes her as being, is a manipulator, determined to have a sister marry a wealthy American.
Even the Inspector who is investigating Pyle’s death outwardly disdains the American involvement in the country and appears too diffident to truly explore his suspicions that Fowler has been involved.
Yet Noyce and writers Christopher Hampton and Robert Schenkkan seem to want to redeem Fowler; after all he gets the girl by default and, through a tacked-on ending not in the original Greene fiction, we see a series on ongoing reports he makes in the years after as the war progresses.


If the work has any true hero, however, it has to be Pyle. Even though he is severely naïve and destructive (forces that Greene commonly links and attributes to Americans), he is, unlike Fowler, a man of action and a person of beliefs. Furthermore, he saves Fowler at least twice in the film, the first time by suddenly appearing on the scene in a city the Communists have reportedly just attacked and later, when the two are trapped at an isolated watch tower. Moreover, he gentlemanly tells Fowler of his love for Phuong before he begins to court her. And when he does win her over, it appears that he has all intentions, at least, of actually marrying her. Even after Pyle’s death, and knowing the truth, Fowler admits to the inspector that he had truly liked the man.


Indeed, one might argue that there is a closer relationship between the two men, British and American, that either of the men’s relationship with the beautiful Phuong. If they could only marry each of their best qualities and leave behind their worst, they might become a single moral being: a man of action and belief who with the wisdom of age and experience seeks out the truth, reporting it to the world at large. In a sense their fight over Phuong is akin to the French and American battle for the heart of Viet Nam itself, with neither of them truly knowing her but merely wishing to possess her.
But, obviously, the truth is that everyone in Graham’s world has nearly equal qualities of good and evil within them, with their interactions often ending in tragedy. Pyle’s longed-for “third force,” in fact, is neither the French colonialists nor the Americas, but the communists themselves who returned the country to a kind of wholeness that no outsiders could bring about.