No sooner does Thomas Novacheck (Mathieu Amalric) badmouth all the women whom he has been auditioning for a production of his adaptation of the Leopold von Sacher-Masoch fiction Venus in Furs than do the “gods”—or perhaps we should say “goddesses”—call up the presence of what seems to be a rain-drenched, gum-chewing, apparently mediocre actress, Vanda (coincidentally the first name also of his dramatic heroine) Jourdain (the remarkable actress Emmanuelle Seigner). Vanda has missed her audition, so she claims, by several hours, through slow subways and simply having to maneuver through the Paris streets. 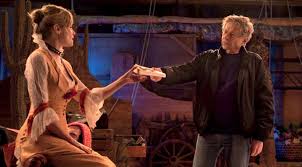 At first sight she is precisely the kind of woman that Thomas has been inveighing against to his wife. He is tired, and it is late; he simply wants to return home, and this woman, who has no idea of whom the real writer (a great figure Thomas maintains) Sacher-Masoch is simply another example of the failure of the opposite sex. Vanda, who suggests she has briefly read a few pages of the subway, describes the work simply as “porn.” Thomas attempts to dismiss her, and she, using one of the oldest wiles of women, cries. He attempts to console her, and so begins what he might never have imagined: a realization of the very issues of control and power about which he has attempted (an apparently failed) to write.
The comedy—and David Ives’ play is most definitely a comic rendition of The Bacchae and the S and M creator’s novel—begins with Vanda pulling from her bag, very much like a true believer in S and M regalia might have to carry with her or him, a dress of the period of the play. Within moments she has properly adjusted the lighting of the empty theater, accomplished her vocal exercises, readjusted her mop of hair into an attractive bob, and launches into a quite convincing performance of the dramatic Vanda of the 1870s. Several things suddenly begin to suggest to Thomas that she is not quite the figure she has pretended to be.


First of all, he can find no such name on his list of audition appointments; moreover, she has a complete script, which he has provided to no agents. She also seems to know the entire text by heart, even though she claims to have merely “leafed through it.”
Playing to Thomas’ male ego, Vanda suggests that he would be the perfect actor for central figure of the play, and helps direct even more than the advice he provides her in their roles. Moving in and out of the theater of the piece, she accuses him of sexist values, while purring out the lines that gradually seduce him in the same ways that the character encourages the wealthy suitor in the play. Vanda, the actress, moreover, has even purchased an authentic dressing gown for Thomas, which she digs out of the deep confines of her seemingly bottomless bag.
Slowly, Vanda the actress and the character begin to become intertwined, just as she begins to call the character he plays by his Thomas’ real name. At some point she even begins to suggest that she knows a great deal about Thomas’ fiancée, and ultimately suggests they might actually be working together to force the writer-director to perceive how he is abusing women.
By the end of their hours of dramatic encounters, she has even convinced him into playing Vanda, while she takes over as the dominating male, eventually tying him up to a stage “cactus,” a remnant of a former play. Suddenly turning toward him as the Bacchante that she has now become, Vanda mocks the humiliated and psychologically abused Thomas, leaving him alone, dressed as a woman in lipstick, to face the degradation of his own making.


The fact that actress Seigner is actually married to the film’s director, Polanski, and that for the most part, Almaric, who looks a great deal like Polanski, is doing a good imitation of the Polish director, adds further dimensions to this comic tale. Given Polanski’s own history with women, it almost transforms the comedy into a dark and wicked tale, in which his own lover has turned against him in revenge.
The only problem with this brilliantly acted conceit, is that it is precisely that—a dramatically artificial confection that has little to do with the real world. The theme here is everything, while the author (Ives) and director (Polanski) have completely abandoned any pretension of realist narrative. As I have made clear, I’m all for the theatrical—and this is surely one of the most theatrical of all works! That is, furthermore, the very premise, it seems to me, of S and M behavior. Presumably, you don’t really torture people beyond endurance; you merely make it appear as if you might. If you proceed beyond the brink, you become a true brute or even a murderer. The game is everything.
But even though this “game” is downright entertaining, it is ultimately empty, ending, when it is over, with perhaps a chastened individual, but also with a being who, when the bags filled with all of the necessary “accruements”—as Bette Midler mocked in one of her routines—have been dragged away, is simply left alone. The torture was been all for naught, after all just a show. And so we feel after Polanski’s film, as we quietly walk out of the dark of the theater once again into the light. Furs and whips don’t do it for me as much as good old-fashioned lust.