Hal Ashby | Being There

being where?
by Douglas Messerli

Jerzy Kosiński with Robert C. Jones [uncredited] (screenplay, based on the book by Kosiński), Hall Ashby (director) Being There / 1979
Hal Ashby’s Being There, based on the fiction by Polish writer Jerzy Kosiński, represents several overlaying stories and genres. At its base, it is a fable about becoming an adult. The Father (a kind of god) dies, forcing the innocent son to go out in the world and become what he was destined to become. 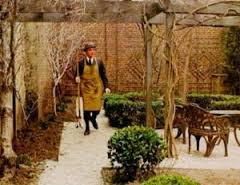 *Apparently Sellers was opposed to the after-credits showing of an outtake, generally called the “Rafael episode,” in which the actor, in take after take, was unable to speak his lines in character, breaking out time and again in laughter as he attempted to utter his ludicrous dialogue. Although it’s wonderful to watch this, I can well understand his objections to it, for it reveals just how ridiculous was the “reality” of the film, and how broad the satire really was. The only thing that kept other such situations at bay was Sellers’ absolute dead-pan presentation of his lines.