Howard Hawks | To Have and Have Not

absolutely sure
by Douglas Messerli


Jules Furthman and William Faulkner (screenplay, based on the novel by Ernest Hemingway).
Howard Hawks (director) To Have and Have Not / 1944

It has always struck me as immensely funny that the great novelist William Faulkner—along with expert screenwriter Jules Furthman (writer of Morocco, Blonde Venus, Rio Bravo and, again with Faulkner and others, The Big Sleep)—was assigned the project of rewriting Ernest Hemingway’s rather mediocre novel, To Have or Have Not. Even director Howard Hawks, an admirer of Hemingway, reportedly thought the work was Hemingway’s worst. 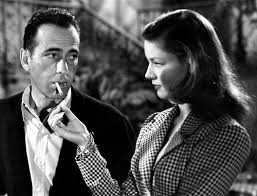 Fortunately, the 1944 film hardly resembles Hemingway’s original, only the basic plot outlines being retained. Instead of Cuba, Hawks and his screenwriters locate the story in Vichy-controlled Martinique, a situation which automatically calls up Michael Curtiz’s film of two years earlier, Casablanca, in which Humphrey Bogart had also starred. Like the earlier movie, To Have or Have Not finds the hero, Harry Morgan, to be an American unwilling to get involved in the French underground; and like Casablanca this film is filled with Vichy followers and revolutionaries—some of them like Marcel Dalio and Dan Seymour having also acted in the Curtiz film—who come together in a local watering hole, this the hotel bar overseen by a popular singer, in this film Dooley Wilson being replaced by the wonderful performer-composer Hoagy Carmichael, playing a figure named Cricket. And just as in Casablanca Harry, here nicknamed “Steve” (Bogart), at the important moment, determines to support the underground, mostly out of love for the beautiful heroine, this time round the singer Lauren Bacall, playing Marie “Slim” Browning.
Yet despite a slew of wonderful lines, Bogart’s brooding cynicism, and some wonderful songs such as “How Little We Know,” “Am I Blue?” “Hong Kong Blues,” and “The Rhumba Jumps,” To Have or Have Not is no Casablanca. The small hotel bar can’t compare to Rick’s American Café, Captain Renard (Seymour) can’t even begin to match Claude Rains’ Captain Renault, and Walter Brennan’s comic drunken Eddie is more spooky as opposed to the loving lug S. K. Sakall. Moreover, as beautiful as is the dusky-voiced Bacall, who was just 19 at the time of filming, she doesn’t have the acting abilities nor the radiant beauty of Ingrid Bergman. And, finally, the story—no matter how Faulkner and Furthman attempted to gussie it up—is just too thin: Harry refuses to help the underground, but changes his mind when the Vichy government accidentally shoots the man who owed him money; he meets the singer “Slim,” falls in love, and to help her, an underground hero, and the heroes’ wife escape, goes patriotic on us.
No, what makes To Have or Have Not so mesmerizing is the obvious electricity of its major characters, who fell in love during the filming. Twice his co-stars’ age, Bogart clearly is so fascinated with the woman he calls “Slim” that we perceive he’d give up nearly anything to keep her near him. The plot complies by time and again permitting the witty heroine to stay instead of going. And Faulkner and Furthman work hard to reveal their deep attachment with risqué lines. The film is well known for Slim’s sultry doorway murmur:

You know you don’t have to act with me, Steve. You don’t
have to say anything, and you don’t have to do anything. Not
a thing. Oh, maybe just whistle. You know how to whistle,
don’t you, Steve? You just put your lips together and…blow.

But just a few moments earlier after kissing him, then kissing him again to which he more fully responds, she quips “It’s better when you help”—an even better line for my money.
Not until Rita Hayworth’s Gilda of two years later would there be a better definition of a vamp.  Bacall was clearly out to seduce her man, and we get to witness every moment of it. Shortly after the film, Bogart divorced his wife and married Bacall, the courtship of which the entire country had witnessed.
While Casablanca is filled with homoerotic moments, To Have or Have Not is utterly heterosexual. Not even Harry’s strange relationship with Eddie is even worth talking about. Eddie, to use the metaphor of the movie, simply has a “bee in his bonnet”—he expresses a constant fear of bee stings throughout—and it is only he who demands proof of the hero’s love. Slim is absolutely sure of her man. From the moment she meets him, Harry doesn’t have a chance.