Yorgos Lanthimos’ new dystopian satire, The Lobster, takes place in a seemingly present but slightly futuristic world where being married is a requirement of life. Those who have been divorced, and even those whose wife or husband has died, are taken to a large hotel and given 45 days to find a new life-time companion. If by the end of that time they have not found someone compatible, they are transformed to any animal of their choice. 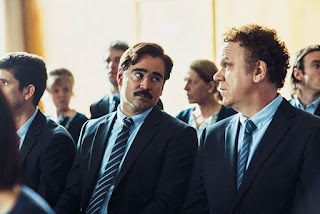 Most choose dogs, reports a hotel staff member, “that’s why there are so many dogs about.” But the “hero” of this tale, David (a physically unrecognizable Colin Farrell), wants to be transformed into a lobster if he cannot find a mate. Even though his brother has become a dog who travels with him, he has chosen to live his own life as a lobster because of their long life-spans and the fact they are “blue-blooded,” a sign of their nobility.
Of course, as another hotel guest reminds him, he might be caught and boiled with his meat scooped out and eaten. Even the domesticated animals are not quite safe: the very first scene portrays a woman angrily speeding to a field where several donkeys have gathered; she gets out of the car with a shotgun and shoots and kills one of the donkeys, presumably her ex-husband against whom she still holds a grudge. We never know whether she got the right donkey.
Not only do the “loners” have to find someone to marry in 45 days, but apparently they are awarded the right to marry more easily if they can find someone with whom they share a major characteristic or habit. In order to save himself, one of David’s friends, the Limping Man (Ben Whitshaw), focuses on a woman who has regular nosebleeds (Jessica Barden), banging his face against a table or wall in order to produce his own nosebleeds. He has a limp and was formerly married to a woman who also had a limp. The ruse works, temporarily, and the couple is awarded a special section in the hotel and then sent out to a yacht for several months to be observed and evaluated as to whether they are truly compatible. If they have difficulties, so a hotel leader reports, they will be assigned a child, “which usually solves any other problems.”
Although David also befriends a biscuit-eating woman (Olivia Colman)—who since she cannot find another biscuit eater, later attempts suicide—and a Lisping Man (John C. Reilly), who, similarly, has no luck in finding a companion.
David decides on trying to convince the Heartless Woman (Angeliki Papoulia) that he is compatible, ignoring the cries of the biscuit eater and even the Heartless Woman’s own mocked death-throes through choking. But when she kicks his brother/dog to death, he breaks into tears, and she becomes determined to report him for his lie, which will mean he will have no choice of the animal he is to become.
If all of this sounds somewhat fantastic and silly, even illogical, one only has to think of our society today which, with its new acceptance of gay marriage (citizens of this dystopian can declare that they are gay, and attempt to find a gay mate, but bi-sexuality is outlawed, presumably because it would mean moving from gender to gender), has increasingly advanced a preference for the marital state—which several single members of the LGBT community, while recognizing the social and political advances, have questioned; and one need only listen to the daily television ads for the numerous dating services—where people are chosen precisely for their “compatibility”—to comprehend the source of the director’s satire.
I know nothing about Lanthimos’ own sexuality, but one might guess that he is gay; oddly enough, despite no homosexual narrative in this film, the movie won a Queer Palm Award at Cannes. I do know that he is unmarried, and, based upon his earlier film Dogtooth, that he is not exactly enchanted with family life.


However, as David ultimately discovers, being a Loner equally has its Kafka-like restrictions. In the woods where the Loners hide out in their attempt not to be shot by the hotel inmates with tranquilizing dart guns (the inmates are given further days for bagging each Loner), flirting, kissing, and sexual intercourse have serious consequences, the latter two involving a deep cutting of lips and other organs.
Here, among numerous of the beasts once existing as humans (peacocks, pigs, rabbits, and other species) the Loner gang members, headed by their Leader (Léa Seydoux), must dig their own graves, where if they are hit they can quickly be buried. Although David has been unable to find a suitable woman in the hotel, he immediately bonds here with a beautiful Short Sighted Woman (Rachel Weisz), since he must also wear glasses. Yet, now their love is quite meaningless and, more importantly, dangerous to their lives. In order to communicate their love among the others, they develop—much as do family members in Dogtooth—an intricate private language wherein, for example, a look to the left expresses their love, while a look to their right means “danger.”


Every so often some of the Loners don suits and return to the city, pretending to be couples so that they might purchase needed supplies; such voyages give David and his new love an opportunity to express to their love more openly, particularly when meeting with the Leader’s parents who might report her “loner” status. But during one of these outbursts of expression, the Leader realizes the truth of the situation, soon after pretending to take the Short Sighted Woman to an eye surgeon to correct her eye problems, which, of course, might make her less compatible with David. Worse, however, the doctor has been told to blind her, and the woman returns to David without, now, any possibility of escape to the other world.
Despite the harsh conditions Lanthimos has outlined, however, the film finally changes gears as it moves into the territory of a romantic love story, as David conveys to his blind lover that he is willing, as a kind of doomed Oedipus Rex, to blind himself in order to join her.


Together the two escape back to the city, David retiring into a bathroom to accomplish the act of blinding himself. It is a difficult task surely, as he stuffs paper towels into his mouth to block any screams he may emit during the act. We never see him actually blind himself, but we can presume it is successful when the screen suddenly goes black
The audience with whom I saw the film, however, seemed not to realize what had happened until the credits began rolling, when several audience members let out laughs and yelps, even a few boos. I could only own wonder what else they might have imagined for this remarkable satire of current social mores? Blindness is always the solution for those who see too much.