an adult fairytale
by Douglas Messerli

Jean Cocteau (screenplay, based on the story by Jeanne-Marie Leprince de Beaumont, and director) La Belle et la Bête (Beauty and the Beast) / 1946

In Jean Cocteau’s famed retelling of de Beaumont’s Beauty and the Beast, Belle (Josette Day) is presented as a caring and serving Cinderella-like figure, whose two vain sisters Félicie (Mila Parély, the former wife of actor Jean Marais) and Adélaïde (Nane Germon) can’t even get invited into a party they hope to attend, and whose brother, Ludovic (Michel Auclair) is a no-good adventurer, whose gambling debts make the already poverty-stricken family all but homeless. 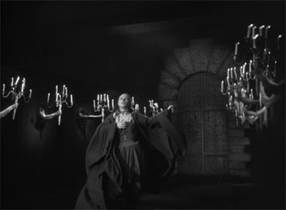 Belle is particularly attentive to her aging father (Marcel André) who the other three almost blame for the loss of the ships which were to have made them rich. And if Belle didn’t have enough to worry about, she is romantically pestered by her brother’s scoundrel friend, Avenant (Jean Marais, who was Cocteau’s lover). Although he is devilishly handsome, Belle continues to reject his marriage proposals.
For a brief moment, joy threatens to return to the household when one of the ships turns up at harbor. The father rushes off to claim his treasure, but is told that the goods have already been sold off to pay his debts. He has not even enough money to stay in town overnight and is forced to make the treacherous voyage home through the forest on a stormy night.


So Cocteau sets up the scene for the old man’s quite surreal encounter with a magical castle of The Beast (also played by Jean Marais).  Here human-like hands jut out of the castle walls holding candelabras, statues move their heads as they eyes follow the visitor and mysterious hands appear to serve the father wine. Doors magically open and close. If it is all a little campy, it is also suitably creepy and wondrous. Indeed, it appears, that the invisible Beast is simply attempting to be a good host—that is until the father, upon attempting to leave, picks a rose to bring back to Belle. Suddenly The Beast appears, threatening the interloper’s life for having broken an unknown law of the domain. Later, we discover that the rose, along with his horse, a mirror, a key, a glove are the very tools which allow The Beast his wealth and power.
These are, of course, the standard symbols of romantic love and the mythic emblems of fairytale romances—although in this case they are all controlled and held by the bestial male, instead of the usual give-and-take mix of male and female in most such romantic tales.
The old man is told he must die within a few hours—unless he is able to produce a daughter willing to replace him. With that, the old man is set upon a majestic white horse, Magnificent, which takes him back home, where he recounts to his family what has happened.

Ludovic and Avenant immediately plot to find The Beast and kill him, even while the father warns them it is hopeless; and the sisters selfishly refuse to accept The Beast’s terms. Only Belle, of course, is selfless enough to replace her father, sneaking out early in the morning on Magnificent’s back.

She too is terrified by the strange emptiness and surreality of the castle, and is even more terrified when she actually meets The Beast, fainting at the sight of him. When she awakens, however, The Beast promises he will not bother her, but will meet her only a dinner, when every day he, like Avenant, will ask for her hand in marriage.
So begins a kind of routine, a life actually quite boring for the young girl, despite the beautiful gowns and jewelry the beast provides for her. He attempts to explain that everything is hers, and that she is in charge, while she still feels as if she were being caged. In its somewhat childlike logic, it all reminds me a bit of how we attempted to let our pet cat know, when she first came into our lives, how she was in control of the house, not us. There was nowhere where she could not go, while we were limited to the daily routine of our more mundane living.
Indeed Cocteau argues from the very beginning of the film, that his audience must attempt to regain some of their childlike wonderment:

Children believe what we tell them. They have complete faith in us. They believe that a rose plucked from a garden can plunge a family into conflict. They believe that the hands of a human beast will smoke when he slays a victim, and that this will cause him shame when a young maiden takes up residence in his home. They believe a thousand other simple things. I ask of you a little of this childlike sympathy and, to bring us luck, let me speak four truly magic words, childhood's "Open Sesame": Once upon a time...

As Cocteau shows us, his beast’s hands do, in fact, smoke each time he captures a deer or other animal in the forest to eat, and he is highly troubled and embarrassed by the fact. She witnesses his lapping up the water from a pool, and later slackens his thirst by letting him drink water cupped in her own hands. Gradually, she begins to see the ugly beast almost as we might a pet, stroking his head, as he observes, instead of accepting his open love. Each night, in conversation, she rejects his proposals, but nonetheless she grows to be fond of him.
Her father’s health, however, still worries her, and she finally convinces The Beast to allow her to return home for only one week. When he finally permits it, he warns her that if she does not return promptly he will die of grief. As she leaves, moreover, he reminds her of his love and faith in her by presenting her with the key to the small outlying building which holds all of his wealth, and giving her his glove which allows her the magical powers of moving through time and space.


Arriving home, she does restore her dying father to good health. But her sisters, hating their now hard-working lives even more, are envious of her dresses and beauty, and immediately plot to find a way to grab The Beast’s wealth by absconding with Belle’s key. Pretending to love and miss her, the sisters try to ascertain as much about The Beast and his location as they can, while convincing Belle to delay her return.
Reluctantly, she stays on another day, while the sisters meet with Ludovic and Avenant once again to plot their methods. Miraculously, Magnificent, carrying the mirror is his satchel, is sent by The Beast once more to bring back Belle, and the two men take advantage of the situation by jumping upon him and commanding he take them where he will.
Meanwhile, Belle, seeing in the mirror how The Beast is suffering, puts on the glove, immediately returning to her castle bed. Yet when she finds the key missing, she quickly returns home, to find it has been stolen. She again returns to the castle, attempting to minister to the dying Beast.


Avenant and Ludovic, arriving at the Pavilion of Diana, where The Beast’s wealth is held, attempt to climb into it through the glass roof. But as Avenant dangles above, ready to leap into the jewels, a statue of the Roman goddess Diana turns and shoots him with an arrow, killing him.
A few moments later, The Beast dies, while Belle cries over his body. Suddenly the body miraculously rises up as the beautiful young Prince Ardent, who explains that since her parents refused to believe in spirits, they turned their child in a beast. Belle herself is struck by the fact that the Prince has a close resemblance to the handsome Avenant. He too now asks her to marry him, she, finally, agreeing, as they embrace, flying through the air to their wedding, where he promises her that her sisters will the carry the train of her gown.
For children, of course, that last scene will simply be a kind of wonderful fairytale-like ending, but for us, as rational adults, it is clearly a kind of mythic representation of love, death, and transfiguration—a kind of resurrection after death. And, for those in the know, obviously, it clearly represents a kind of romantic projection by the director of himself upon the fairytale, wherein he himself becomes the Belle to his idolized Prince Ardent, Marais, turning it into a true “fairy” (i.e. gay) story.


Cocteau, in fact, has hinted at that by involving himself even in the presentment, through his own handwriting, of the credits, almost as if suggesting that “the handwriting is upon the wall”—or in this case the chalkboard. And the rather campy sets and costumes seem perfectly at home in Cocteau’s gay fantasy. After all, the beast which is human lust, is truly beautiful in its trust and love: he and Marais, even after their sexual relationship ended, remained life-long friends.
Yet, none of this should or does actually get in the way of the magical tale involving elements also of Snow White and Sleeping Beauty; it is a film worthy of taking your children or adult heterosexual friends to time and again.