Werner Herzog (writer and director) Auch Zwerge haben klein angefangen (Even Dwarfs Started Small) / 1970, USA 1971
Presumably the title of Werner Herzog’s 1970 film refers to the fact that even “little people” began their lives as babies and young children, despite the deformity of their bodies in their adult life. And that fact, in turn, suggests that they should be treated with equal respect with all others. Clearly that is not the case upon the volcanic island of Lanzarote in the Canary Islands where the action takes place. 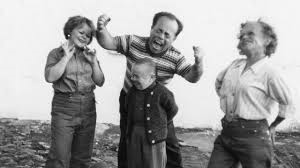 We have no idea why the dwarfed individuals are being held there, nor who, in fact, is confining them, forcing them to water the plants and feed the several chickens, the sow and her piglets, and the pet monkey. Most of the asylum-folk are apparently taken into the city on a weekly voyage, and there is some evidence of their being educated, since another little person is described as the “instructor.”
We also know very little about why the group of 8 individuals (along with two blind little people) who, on the day most of Herzog’s narrative occurs, have been forced to remain home. We can only imagine, particularly, after their rebellion, that these few have been left behind as a kind of punishment. Several times they claim they get more attention by behaving badly than being good.


The uprising begins with seven of them chasing a younger member of their group, Pepe, who is ultimately caught and “saved” by the instructor, who ties him to a chair in the institution director’s office. Angry for the boy’s removal from their group, they begin banging on doors, killing the sow, starting up a car that eventually runs in a circle in the courtyard for more than a half hour, toying with the blind tenants, burning down the asylum director’s favorite palm tree, joining in a massive food fight which ends in breaking plates and other tableware, burning the asylum flowers, staging a cock-fight, and holding a mock crucifixion of the monkey.


In between their often frightening but always fascinating antics, they threaten the instructor, pour over the instructor’s magazines filled with pictures of naked women, and gasp over one of their members’ insect collection for which she has created dresses, hats, and other clothes. Mostly, throughout this madness, they simply laugh uncontrollably, delighted by their wicked spree.


By the end of the day, the instructor has gone mad and abandoned the institution, lecturing a leafless branch for pointing at him. We know from the very first scene that eventually the asylum director did return, order was restored and that the least active of their group—who, it appears, is half-witted and merely reports back what the others say—is blamed for the melee, or, at least, expected to explain it, something he refuses to do.


In using little people as his actors, Herzog calls up several other films, a kind of in-between confrontation of the brutal children of Peter Brook’s Lord of the Flies and the joyful hellion’s of Jean Vigo’s Zéro de Conduite. Yet strangely—despite even the horrific act of killing the sow feeding her piglets or the violence of the cock-fight—there is something truly liberating, even beautiful in the mayhem they create. They are perhaps even less dangerous than the cinematic children, almost unimaginative in their attempts to disrupt their world, and often are happy just to mock the religiosity and pomp of those who control them. Indeed, there is something sad about many of their actions; for example, when they attempt to force the two smallest of their group to “get married,” meaning that they should have sex (reminding one a bit of an early scene in Pier Paolo Pasolini’s Salo), where the male cannot, even with a running start, climb upon the bed where he might attempt to consummate the act. When they attempt to torture their blind cohorts, the two quite handily (at least at first) fend them off with their walking sticks. Even to check out their actions, the instructor must climb up upon a chair to peer through a glass darkly.


Indeed, at moments, there is a kind of surreal poetry to their actions, particularly when they set the flowering plants afire, arguing that the flowers are now truly “blooming.” Their awe and wonder of the little cabinet of dressed up insects, the spider having 8 legs (the number of their own little gang) for whom the owner wanted to make 8 tiny boots, might almost make one tear, were it not for the absurdity of her desire.


Yes, this is a parable, in part, of ostracism, of the extremes those who have been rejected by political and social systems will go to be heard, even if their fists can only pound against impenetrable doors, wherein, as in one instance, one has lost her shoe. Herzog’s use of wonderful South African native music makes that quite clear. But Herzog also seems determined to show us something far more profound about human experience.


As in so many of his films, Herzog reveals the instinctual chaos of both animal and human nature, but then there is also our innate fascination in observing it. And with actors such as these little people, Klaus Kinski, and Bruno S., Herzog is almost always immediately able to get right to the heart of things: “the horror, the horror.” In that sense, we might argue that Herzog is kind of a later-day Joseph Conrad with of touch of Jack London in him.
Los Angeles, May 8, 2016
Posted by greenintegerblog at 9:59 AM