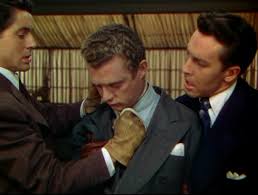 Two men are seen chocking another man to death in their apartment. But that act is only the beginning of a much longer and more troubling tale. Who are these men and how did they come to murder a man whom they do not truly even care about? Why would they murder a man who was basically a stranger, and what allowed them to believe that they might commit this dreadful act?
By 1948, when this film appeared in the theaters, Alfred Hitchcock had directed numerous films in which murder and mayhem was the major theme, but this film was different. First of all, Hitchcock determined, from the beginning, to make this film in “real time,” and in a near-continuous cinematic presentation—despite the reality that the big Technicolor cameras of the day could film only 10 minutes at a time. The great director faked the reality by a balletic-like moving of walls, quickly shifting furniture, and by covering up cuts in the film with close-ups of figures and objects to hide the breaks in continuity. A cyclorama, pretending to represent a view of the city from the apartment carefully shifted from daylight to sunset and darkness—requiring Hitchcock to reshoot the last scenes several times to get a more believable vision of the natural changes of light.


For all the remarkable cinematic tricks of the film, however, the real heart of this film is about that terrible first event, the absurd Leopold-Loeb murder of another human being, based on their own perverted education, in which a former schoolmaster, willingly or unintentionally taught them to believe in Nietzsche’s notion of a superior race—allowing them to feel they were intellectually superior people, who were above the social and intellectual norm of their peers. They not only have meaningless killed their victim but have determined to celebrate their murder by hosting a party for his victims, using his temporary coffin as the table on which they serve up their culinary delights.


But for all the horror of this premise, the real, and quite unspoken element of this film—which Hitchcock and his writers so effortlessly presented that even the  restrictive Hays Code and Catholic restrictions permitted the film’s existence—is that the two central characters of this film, Brandon Shaw (John Dall) and Phillip Morgan (Farley Granger) were openly gay character-actors—although “open” in those days meant a great deal of studio cover-ups. While the gay writer of the screenplay, Arthur Laurents, attempted to make the story more transparent, Hitchcock and others refused to talk about “it,” the bugaboo that would surely have downed their project. “Everyone involved knew,” so Laurents proclaims what “it” was, but no one was willing to talk about “it,”—the fact that the major characters were gay— reiterating that Hitchcock presented their relationship quite matter-of-factly, allowing even the housekeeper, the wonderful Evan Evanson, to describes her current employers (she has previously worked for Rupert Cadell), as both having gotten up “on the wrong side of the bed” that same morning.


Hitchcock was, reportedly, delighted when he got word that Laurents and actor Granger were having sex during the shooting of the film (the two, in fact, had a four-year relationship). But the subject in his film was presented so ordinarily that even the censors seemed not to have noticed it, permitting the film to be one of the first “obviously” gay films—even if most visitors to the theater may never have recognized it as such.


The wonderful tension between the two gay murderers, however, is at the heart of the story, as is their relationship between their former headmaster, Cadell (James Stewart), who—according to the original play—previously had had a relationship with Shaw. But, the straight-laced Stewart has no ability to portray that former relationship, and, as Laurents himself has suggested in a later documentary commentary, performs the role as a gumshoe rather than a man who is immensely involved in the murder itself. He appears to have never really had a true involvement with these figures, as if he has only slightly stumbled into their world, with which Brandon, particularly, feels he was so intimately involved.
The dramatic scenes in which he might have to come to terms, given his own guilt through his philosophical teachings, with the murderers, shifts instead to the  disavowal of his own statements, making him a pitiable figure who cannot comprehend his own involvement. Not unlike his final scenes in Vertigo, wherein the Stewart character cannot perceive how he, himself, has been the virtual murderer of the beautiful Madeleine, this Stewart character simply disavows his personal responsibility. He is a moral failure, not a hero—even if he has solved the plot and called for the police. When the two lovers eventually at their hanging swing on for their actions, he will remain safely in his bourgeois editor’s bed, wondering only where he might have gone wrong. Yet, he helped make these monsters, perhaps even sexually abusing Rupert as a young man. Stewart simply cannot convey this.
Hitchcock had offered others—James Mason and Cary Grant, both of whom he slightly mocks through his clownish character’s Antina Atwater (Constance Collier) admiration for them—the role of Rupert Cadell; either might have been perfect to convey the sexual tensions between pupils and teacher, but both refused  the role. James Stewart plays the figure, accordingly, with a great deal of confusion and a lack of commitment, twisting the movie into a kind of moral confusion that made it difficult for the movie-going audiences of the day to comprehend. And certainly, had the movie focused on those slightly pedophilic relationships, the movie might never have been made.
If, in hindsight, Hitchcock’s film seems remarkably innovative and amazingly “cool” about its sexual assertions, in 1948 it seemed only a mild statement of a willful murder—which wasn’t even a true “who-dunnit,” since we know the murderers from the first moment of the film—with audiences of the day unable to comprehend precisely where the director’s sentiments lay. Were the murderers simply monsters predisposed to their criminal acts, or was it something these bright students learned, their murder simply a lark based on their own blessed social and intellectual entitlements? Hitchcock, alas, seems unable to even to address these issues in Rope. Nonetheless, I’ll take the movie’s witty dialogue above any plodding social document, making these issues more apparent, any day.