Rainer Werner Fassbinder | Welt am Dracht (World on a Wire)

Daniel F. Galouye and Rainer Werner Fassbinder (screenplay, based on Galoye’s novel Simulacron-3), Rainer Werner Fassbinder (director) Welt am Draht (World on a Wire) / presented on TV on two evenings / 1973
Rainer Werner Fassbinder’s two-part television series of 1973, World on a Wire, might, at first, appear as an anomaly in his remarkable career, wherein he produced more than 40 films in  little over a decade! What is startling is that every film I’ve reviewed to date, 18 of his films, have been utterly fascinating and critically significant to me. Yet this TV production, a science fiction movie anticipating Ridley Scott’s Blade Runner—but entirely without its gorgeously textured and remarkably inventive film-noir LA world—made me feel, at first, almost as if to be a work not to my taste. 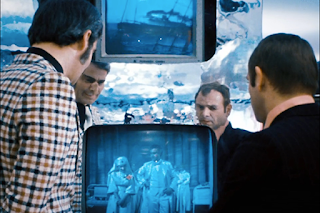 I was mistaken. In his exaggerated, late-1970s and 80s tropes (realized in early 1973), his film captures quite beautifully a world in which it is extremely difficult to tell the real from the imagined, the soulless figures wandering through a privileged world who you simply cannot quite determine whether they are “real” or “simulacrums” of some wealthy businessman’s vapid imagination. Is the clearly empty-minded Gloria Fromm (Barbara Valentin), appearing like a mix of a Barbie doll and some Felliniesque grotesque, to truly be taken seriously? Or even the more traditional statuesque—right out of James Bond—Maya Schmidt-Gentner (Margit Carsensen), serving as the hero’s, Fred Stiller’s (Klaus Löwitsch) secretary. Surrounded, as they are in Fassbinder’s film by young muscled toy boys, stretching themselves out in pools and clubs more for one another than for their female admirers, this work is clearly Fellini-obsessed.
The troublesome Institute of Cybernetics and Future Science—with a new supercomputer project which involves an artificial world of 9,000 “identity units,” living as humans unaware of their own simulacrum existences—is having problems. The completion of their project is behind date, and the German government is growing impatient. Meanwhile, the institute leader, the clearly self-serving Herbert Siskins (Karl-Heinz Vosgerau), is secretly meeting with the head of US Steel to help him use his own computer to project sales for the next few decades, a policy much opposed by the computer’s creators, Professor Henry Vollmer (Adrian Hoven) and his assistant Stiller.
Even worse, Vollmer has become unstable, mocking the German Secretary of State and explaining to the company’s security guard, Günther Lause (Ivan Desny), that he knows something he cannot tell anyone, for were he to reveal it, it would mean the end of the world. Just as Lause begins to perceive what he thinks is the true insanity of Vollmer, the computer director seemingly disappears, and is found by Lause, soon after, dead in the computer room.
Inexplicably, Stiller has been away during these events, but quickly returns, trying to comprehend what has become of his former friend, and tying to reintegrate himself into the company—which he clearly dislikes—where he will now be made head of technological research.
Even more strange events begin to arouse his suspicion: in the midst of a discussion with Lause about Vollmer’s strange behavior, the security guard suddenly vanishes, and no one in the company or even the police who have been called in to investigate Vollmer’s death, seem able to remember his existence.
A drawing Vollmer has left behind (a picture Stiller’s psychologist friend interprets as being a rendering of Zeno’s Paradox, wherein a tortoise continually out-races Achilles) suddenly disappears, even as Stiller, in the presence of Vollmer’s beautiful daughter—with whom he seemingly has had a past affair—is studying.

Soon, indeed, things become even stranger, as Stiller himself begins to experience the pounding headaches that his predecessor had suffered. One of the simulacrum's, connected with Einstein, the only computer-created figure to whom they have revealed the truth, attempts suicide. Connecting up electronically with one of their average “truck drivers” Stiller is almost killed by a lapse of computer connecting, roads which had not been properly realized by their computer projections.
Not all of Fassbinder’s futurist world is entirely comprehensible, and much of his film, shot in France in deference, apparently, to Godard’s Alphaville, matches either Godard or Fellini as the German director focuses on shabby underworld plastic-based consumer cultures with none of the aplomb of the supposedly sheik business world in which Stiller is supposedly involved. But that is the point, Stiller, like Vollmer before him, no longer cares. For he has gradually begun to realize that just as Einstein is desperate to be moved “up” into the real world, that Stiller and those around him may, in fact, be just simulacrums themselves to some other “higher” world. They are no freer than the Christopher Nobody whom he has just had deleted from computer memory; Lause has disappeared for the very reason than Vollmer has been killed: he no longer served the creators’ purposes, and was a danger to the delusions under which everyone exists. How can one commit to a world which you discover is a simply a Pirandellian mirror? To put it in terms of the later Blade Runner, if anyone might be a replicate, who is truly real? And how many layers of reality are possible before that “real” might be discovered. Is it the outer layer or the very inner layer of an onion that is the true heart of the plant?
I cannot quite commit myself to Fassbiner’s resolving of this situation. Eva Vollmer, it appears, is the only connection to the “real” world, and her love for Stiller allows him to be murdered in his fantasy existence while being replaced in her world with the living Stiller, as she switches the “fake” for the real. How can we be sure that the “real” is the end of the infinite number of boxes of reality? And can we truly presume that this “real” world is better than the illusionary worlds beneath it?
Of course, what Fassbinder really does in this film is to create a fascinating study of how cinema and television, surely an illusion of the real if there ever was one, relates to our own presumably “actual” existences. Are his and other filmmakers’ illusions truly inferior, he almost challenges us, to the world in which we pretend to exist? And, frankly, given my love of his films, I’m not so sure I might not want to sink into the company of his desperately blind seekers of Plato’s truths. Yes, I admit it, I am blinded by Fassbinder’s lies. Is it any wonder the philosopher banned art?

Posted by greenintegerblog at 1:17 PM