Patrick Wilde (screenplay, based on his play What’s Wrong with Angry?), Simon Shore (director) Get Real / 1998 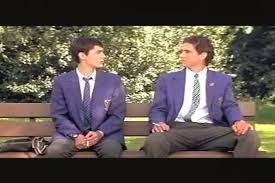 The plot of Simon Shore’s 1998 gay teenage comedy, Get Real, hardly does justice to its dramatic force. The story—where the young, highly intelligent, good-looking Steven Carter (Ben Silverstone) falls in love with the high school’s handsome star athlete, John Dixon (Brad Gorton), developing a relationship which ends badly when John cannot come to terms with his own sexuality and Steven comes out to the entire school—simply doesn’t convey the tenderness and wit of script and the poignancy of John Lunn’s musical score.


Although the film certainly does play with stereotypes, particularly in its presentation of Steven’s fag-hag friend, Linda (Charlotte Brittain) and the mean-spirited sports-playing friends of John, the rest of the characters do not serve as types, even if at times, the unhappy Steven  perceives them as such. His mother and father, for instance, who cannot even imagine that their son might be gay, lovingly worry over him, and seem able to embrace the facts after his public coming out. And Steven’s school friends, with the exception of John’s bullying gang, appear to be open to having a gay classmate, even if the faculty refuses to print Steven’s open letter in the school paper. Steven himself, despite his adolescent anxieties, seems psychologically well-balanced, having evidently embraced his sexuality since the age of 11. As he, himself, expresses it, in declaring his sexual preference at the graduation ceremonies: “what’s the big deal about being gay? It’s just sex.”
Yet, the numerous times I have watched this small film, tears well up and age old memories of the longing sexuality that lie beneath the feelings a young gay person of Steven’s age surge forward.


Perhaps it’s the simple beauty of the two male leads and the feeling that they should become a pair, but will never be able to remain together given John’s own fears of his social position—being a British work, class distinctions do very much also play a role in this work—makes one feel the injustice of the situation. Why don’t these boys have the right to openly share their love like the heterosexual characters do?
For all the homophobia they fear, the boys are clearly not met with the community shunning one might expect in such a rural city. Sexual differences, it is clear, are not simply a matter of the prejudice of others, but arise from inner fears of being different and its possible repercussions.
The story makes that clear very early in the story when a handsome “bloke” that Steven has met at the local park toilet (the park and its toilet are the only place where young boys and men can go to share sex in the small town of  Basingstoke) turns out to be married, with a baby. And in what we suspect will be his future tragedy, we also catch a glimpse of what, sadly, may later happen to John. As The New York Times reviewer Steven Holden summarized it: "The movie captures the excruciating paranoia of a situation in which there’s nowhere the lovers can be alone except in each other’s homes on the rare occasions their parents are out."


But, in the end, it’s Shore’s direction that helps to make this work so engaging, accomplishing many little wonders like the scene in which the boys are dancing with women at a school dance, while staring into each other’s eyes; or, after having spent a night together in bed, John wakes up to find Steven downstairs cooking breakfast as he jocularly jests that his parents have returned and are waiting to meet his lover; or the scene in which John appears in   his backyard swimming pool as the mean-spirited Kevin, one of John’s teammates, comes running by at the very moment that Steven rises out of the pool, revealing that John is seated on his shoulders; or the painful late scene where we hear the cries of Steven as John is purportedly beating him to prove to his friends how much he hates the “puff,” which the camera soon after reveals is all an act, the boys actually about to hug.
While both boys do share the angst of all the young men and women of their age, the movie somehow manages, in part because of Steven’s public outing of himself, to convey a very positive outcome. John will most certainly go on to Oxford, unhappily hiding his sexuality until he comes to accept it; but Steven, it is clear, will go to a brilliant life and career, free of self-hate.
In real life, the actor Silverstone, after other movies and work in television, went on to Cambridge University and now works as a barrister in London.