as the wheel turns
by Douglas Messerli

Director Abel Gance’s original La Roue was 32 reels in length, shown over a period of three days, running for a total of 7 ½ hours (some claim is was closer to 9 hours long). For the British showing it was collapsed by the director himself into 2 hours, obviously focusing on its sentimental story, and for years this is one most critics saw, the original having long been lost. The most recent recreation of the film by Eric Lange and David Shepard (released in DVD by Flicker Alley) runs about 4 ½ hours, and varies highly in quality. But at least we can now see Gance’s great experimental work in the way that is closer to how it was originally intended. 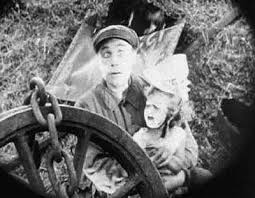 The story, if dramatic, is hardly important. The great train engineer, Sisif (Severin-Mars, who died before the film was released) returns to work at the very moment a train crashes into another. Thinking quickly, he closes down the other lines only to find that one line is still open with a third train soon barreling into the station. Singlehandedly, he lifts an axel allowing the line to be closed and saving the day. He also discovers a small child among the rubble, whose mother apparently has died in the accident.
Taking the girl, named Norma (Ivy Close), home, he places her in bed beside his son, Elie (Gabriel de Gravone), whose mother died birthing him. Years later, the children, living in a small stone house in the middle of the Nice tracks, have grown up, both feeling deep love for one another, without knowing that they are not related. Elie, trying to ignore his incestuous feelings, puts most of his energy into violin making, while also attempting to find a varnish close to the one created by the great Cremona violin makers. Norma busies herself with house cleaning and caring for her pet goat.
Sisif also has developed unnatural feelings for his young charge, and finds it difficult to contain himself, insisting that she stop wearing short dresses and silk stockings, and demanding that the brother and sister do not spend time alone. The first engineer has also taken to heavy drinking in order to wash away his perverse thoughts; he wears a mask of coal dust each evening so that she might not read his real feelings upon his face.
The beautiful Ivy, confused by his changes in personality, determines, finally, to accept the proposal of a wealthy railway man, Hersan (Pierre Magnier), for whom Sisif has been creating railway innovations, which Hersan pretends are his own handiwork. At first, Sisif refuses, but, having told Hersan of his feelings for his daughter, he’s blackmailed into allowing the marriage. He even agrees to transport his daughter, via train, to her marriage, but in his drunkenness and self-pity almost crashes the locomotive, until his stoker—himself a heavy drinker—slows the train and brings it to a successful destination.

This being Sisif’s second reprimand, along with the fact that he is losing his eyesight, means he is taken off duty and sent off to run the funicular at Mont Blac. There, he meets up again with his daughter on a visit from her unhappy relationship with Hersan, who in the meantime has discovered her own feelings about Elie (don’t ask: it involves a letter in the interior of one of the violins) and, meeting up with them, attempts to kill Elie. The young violin-maker, who succeeds in fatally wounding his assailant, spends several frames hanging from a cliff, until he falls to his death within a glacier.


Although Sisif, blaming Norma for her intrusion into their lives, once again sends her packing, she quietly returns, which he, now suffering from blindness, does not even notice, until in a moment of rapprochement, he discovers her presence accepting her aid and love. By film’s end, he sends her off to dance in a group “ring dance,” while closing his eyes in acceptance of his death.
Pure melodrama, even given its archetypal motifs. As for the acting: yes, Norma Desmond, these figures all have great faces, but their overly emotive gestures cannot be explained away as anything but bad acting.
It’s hard to imagine, as critic Dave Kehr has written, what might been in the other three or five hours of this film concerning its plot. Yet, as I have asserted, it doesn’t truly matter. What is great about La Roue is Gance’s absolute joy in trying out every cinematic trick he might imagine—most of which today have become standard procedures of filmmaking and editing, but which, in 1923 had never or seldom been seen on the screen.
Given the English title, The Wheel, meaning both the wheels of locomotives and the ancient torture device, symbolizing the changes of fate, Gance explores every possible image of roundness, from his endless cinematic iris closings and transitions, his insistent close-ups of the moving energy of locomotive wheels, and the final ring dance. Time and again, images are enclosed in circular friezes, like cut-outs from some ancient scrap-book.
But even more innovative is how he uses the vast screen, for narrative allowing full images that appear more epic than the domestic dramas they tell, and then narrowing down the image into a small sliver of a railroad track that plays almost as a visual grace note. Fully conceived comic sketches suddenly turn into brooding symbolic framings, where even the characters comment on the iconic looks of their fellow beings. The original train wreck is far better than Cecil B. DeMille’s of The Greatest Show on Earth. And the impending second crash demonstrates a magnificent series of cuts between tracks, hands, levers, wheels, and pure abstract space. Time and again through Gance’s film images are pared down to be transformed from narrative significance to symbolic abstraction. Despite its melodramatic contrivances, the film is a feast for the eyes. At moments, as numerous critics have noted, it appears that Gance simply cannot/will not control himself as he juices up scenes with brightly tinted red, blues, and greens, overlays images, plays with distortion, and blurs his figures as they trot out of camera range.
Of course, not all of these highly experimental cinematic devices work; and, as Kehr argues, they are perhaps not even appropriate to a single film. But the very energy they and its creator (and surely his brilliant poetic assistant, Blaise Cendrars) exude cannot be dismissed. Even the intertitles, quoting major poets and writers (Kipling, Baudelaire, Hugo, and, yes, Cendrars) seem unable contain their larger ideas. The wheel turns and turns and turns with utter abandonment, throwing out everything before it and after. As Jean Cocteau remarked “There is cinema before and after ‘La Roue,’ as there is painting before and after Picasso.”
Perhaps the best the way to think of Gance’s La Roue is not to experience it as a coherent movie, but rather as a series of cinematic pyro-technics. Gance clearly took a simple story and explored it with whatever arsenal he had in his head. If today it seems sometimes banal and outdated it is only because every filmmaker after him stole those ideas and embellished them so thoroughly that they became standard methods of filmmaking.