awarding a rose to the invisible audience
by Douglas Messerli

What at first seems to be a kind of comic homage to Iranian filmmaker Abbas Kiarostami, who in his films Taste of Cherry and Ten centered the action in a taxicab, goes beyond those issues when one realizes that this taxicab driver is none other than the noted Iranian director Jafar Panahi, who has been sentenced to house arrest and to a 20 year period in which he not permitted to make movies. As in his 2011 This Is Not a Film, a film shot entirely by a colleague within Panahi’s apartment about a movie that the director could not make but acted out nonetheless, and his “thriller” Closed Curtain (again shot by a colleague), Taxi was not actually filmed by Panahi but by a camera attached to the dashboard of his cab which he describes to his seemingly random pickups as a “security device.” Accordingly, there are no writers and not even a true director; it is simply titled Jafar Panahi’s Taxi, a description of what it actually was. 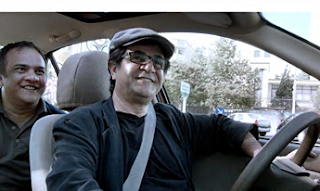 Indeed his first customer, seeing the camera, immediately perceives it as precisely as a security device and goes on a long rant against thieves who steal tires from ordinary folk, insisting that, under Shiria law they should be executed. An outspoken woman school teacher, sitting behind him, speaks out against his convictions, arguing that Iran needs no further executions, and pointing up the ridiculousness of his viewpoints; viewpoints which he emphatically disputes, demanding “justice.” When finally the two leave the taxi at different places, a third rider, Omid, smilingly tells the driver that he recognizes him, having sold him banned pirated movies in the past, while suggesting that the two other passengers may actually have been actors.
The film’s audience, in fact, has no way of knowing for sure whether or not the film’s action has been planned or happened quite accidentally, and for the rest of the movie it is almost impossible to determine whether what we are seeing is a fiction or a real series of experiences. In short, one is never sure—and Panahi’s subtle shrugs disavow any knowledge of—whether this is a real piece of cinema or a series of convenient coincidences. Did Panahi “make” a film or was he merely recording a series of Tehran encounters?
In any event, we soon are convinced that this door-to-door movie pirate is, in fact, a kind of hero, bringing art to an audience to which it would otherwise be unavailable because of censorship. Because Panahi is at the wheel, he able to convince another customer he brings into taxi to buy more DVD’s than usually does.


Soon after, the cab picks up two elderly women, quite outspoken also—it is women, in this film, who truly speak their feelings—who, with a fish bowl in tow are in a rush to visit a fresh spring. Unlike the outspoken schoolteacher, the opinionated traditionalist, or the friendly film dealer, these women are superstitious believers, who fear that if they cannot get their fish to the spring by noon their very lives are in danger. These are the very believers who allow Iran’s complex series of irrational laws to exist, and Panahi, it is clear, although sensitive to their concerns, cannot wait to rid himself of them, shuttling them off to a “real” taxi driver who can better speed them on their way.


Besides, he is late in picking up his own niece from school. The niece, the charming Hana Saeidi, is also outspoken, chastising her uncle for his lateness and expressing to him her feelings about what her teacher has told her about her desires to make a film. With camera in hand, the young girl also films her uncle and aims her camera at the street, while expressing a long list of what she is not permitted to film. Women and men must not be seen together; women must wear a hijab, and male heroes cannot wear a tie. She is to “show what’s real but real real. As Panahi suggests, “There are realities they don’t want shown,” clearly what lies behind his own “crime.”
Later, when she accidentally (?) films a young boy picking up money dropped by a stranger, she lectures him for making her film “unvirtuous.” How does one film “the real” accordingly if one must censor the facts?
Soon after, Panahi encounters yet another vaguely sinister friend who takes his niece for a fanccino (iced coffee), a man, apparently, who is also meeting with Panahi on the side. Hana even describes him as a bit sinister, but is happy for the drink.


But it is Panahi’s last customer, a woman carrying a bunch of roses, who truly helps to reveal the director’s film as a truly transgressive act, and helps us to perceive just how brave Panahi has been in making this work. The rose-laden woman just happens to be the famous Iranian human rights lawyer Nasrin Sotoudeh, on her way to visit a hunger striking prisoner, who reminds the director that they have also met previously on a hunger strikes in the past. As The Guardian film critic, Jonathan Romney, writes: “she extends a rose to the camera, and implicitly to the world audience ‘because the people of cinema can be relied on.’”
When the camera goes black there are no end titles. Panahi simply notes that he cannot name anyone because Iran’s ministry of culture and Islamic guidance only approves the credits of distributable films.
This film, sneaked out of the country, won the Golden Bear prize at the 2015 Berlin International Film Festival, proving Sotudeh right. Panahi, not allowed to attend, sent his niece to receive the award. I can’t wait to see what films she might someday make.