restoral of the ordinary


Quite by accident, immediately after seeing Fontaine’s The Innocents, which I review above, Netflix sent me Jean-Pierre Melville’s 1961 film about the French occupation in World War II and a struggle for faith, Léon Morin, Prêtre, a movie which I had long before entered into my queue, and had never before seen. 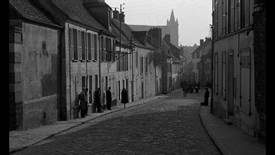 Although many of the very same issues about faith are raised in this film—for example, the priest Morin (Jean-Paul Belmondo) argues, reminding us of Maria in the Fontaine film that, “If there were proof [of God], everyone would believe. We’d understand. We’d know. We’d see this world would no longer be the world below, but heaven.”—the context here is quite different. Indeed, the small French village in which the widowed Barny (Emmanuelle Riva) finds herself, is also isolated, with both Italian and German soldiers forcing their way upon them, this woman, whose husband was evidently Jewish, is without faith, but yet when the Germans arrive deems it preferable—as do several other village women—to baptize her child.
Melville reiterates the irony of the situation as, after the ceremony, we see several of the male attendees rushing back to their mountain hideouts, obviously Resistance soldiers who have come down from the mountain to see their own children “inoculated” from German suspicion. Just to be safer, moreover, Barny sends her daughter off to live with two elderly spinsters in the country.
Yet Melville does not dwell on the dangers of occupation. Rather, he subtly reveals them in more subtle ways, such as the moment we witness Barny peering a show window, while behind her the Germans can be seen arresting citizens. The Italians, with their plumed helmets, are merely a small intrusion, but when the Germans come marching in, we sense a change in the entire place.


The film, however, is not so much about the occupation (although, as The New York Times reviewer Manohla Dargis notes, the world Barny inhabits “is one of profound disarray — fractured, unstable, uncertain”) but about how one might live a stable and meaningful life despite the War.
Against this fragile world, Barny does appear to be a healthy survivor. She is not in the slightest embarrassed to later express the fact that she adores one of her female supervisors, Sabine (Nicole Mirel), and ponders a potentially lesbian relationship that Melville depicts through a scene in which Sabine leans over Barny at her office desk, with her breasts encompassing the other woman’s head. Barny, herself, gushes, “She’s like an Amazon.”

Her daughter’s baptism and the girl’s church studies, however, soon lead her to the town’s cathedral, if no other reason than to confess her hypocrisy. Fearing an older stern priest, she picks out her would-be confessor by his working-class name. What a wonder that she discovers in the confessional not only a handsome man, but a person willing to accept her lack of faith and to begin a conversation with her in his room at nights. The first time they meet, Melville’s camera, reminding one a bit the cinematography of Robert Bresson, literally undresses the young priest by panning down his robe button by button! What follows, over several weeks, are intense meetings, where they do little but discuss the books he offers her to read, but in which the director’s camera, through the flickers of their eyes, the brushing together of their hands, and numerous other gentle insinuations, we observe them struggling to against carnal love.
Morin, for his part, remains ever open and honest, admitting, for example, that “God is an experimental and entirely incommunicable being.” When Barny complains of her reading, he responds: “The workings of God do not make a satisfactory ladder to God.”


Not so very amazingly, perhaps, Barny finally converts, insisting she has become committed to the Church. Even Morin doubts her convictions. Melville was quoted as saying “she converts in order that they can have sex.” Of course, they never do have sex, even though by the time Barny has found religion, several of her woman friends have begun to seek out the priest for personal studies as well.
None of these is of interest to the director or us because, in a sense, in Barny’s conversion, Morin has already consummated their relationship—spiritually at least. And in that consummation the woman has been able to come to terms simultaneously with herself and her god. The War ends, and her child returns from her country stay. As in Fontaine’s film, the ordinary has been restored.