Barbara Turner (screenplay, based on a story by Turner and Neve Campbell), Robert Altman (director) The Company / 2003

Roger Ebert describes Robert Altman’s penultimate film, The Company as, strangely enough, an autobiographical film—even though when the director was first presented with the script by former dance Barbara Turner, he responded, "Barbara, I read your script and I don't get it. I don't understand. I don't know what it is. I'm just the wrong guy for this." 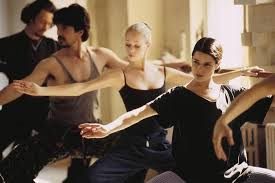 Yet, he was clearly not the “wrong” guy, perceiving that the ensemble performative elements of the Robert Joffrey ballet company and the persona of Gerald Arpino, renamed in this work Alberto Antonelli (Malcolm McDowell), that the vast group activities did, in fact, have a great deal in common with his directorial activities: both Mr. A’s (Altman and Arpino) had always to deal with the large egos of their performers and the impossible costs of mounting such exuberant and often experimental works.


Ballet stars, however, are paid, as this film makes clear, far less that their Hollywood counterparts, often having to work extra jobs just to pay the rent, or, even worse than the balletic star of this film, Neve Campbell, having to camp out on the floors of other ballet members’ small apartments. Although the vicious hierarchal star system of Diaghilev’s Ballet Russes as represented in Michael Powell’s and Eric Pressburger’s The Red Shoes may have been obliterated by the shifting casting of the Joffrey company, the various shifts of plum roles still riffle long-time company members. And the serious commitments these endlessly-working performers must make to their career clearly interfere with any possibilities of their love-lives.
Although Campbell (playing a character named Loretta 'Ry' Ryan) falls in love with the seemingly perfect young man, a young chef, played by James Franco, she fails to show up on time for his lovely late-night meal. How she possibly maintains her daytime dancing career and her night-time activities is not entirely explained.
Even more importantly, dancers, unlike the Hollywood actors with whom Altman works, live in a fragile world not unlike beloved race horses: at any moment the strenuous imposition of legs, feet, and other limbs forced to disobey the obvious laws of gravity, endanger not only their careers by their lives.
Both the incredible popular dancers, Michael Jackson and Prince, one must remember, suffered so much pain that they sought relief in opioids and other drugs. These Joffrey dancers must not only bind their feet—a bit like the ancient Chinese women—but daily suffer pain that, for the older major dancer of the group, often ends in broken tendons and the end of their career. It is important to remember, also, that Joffrey’s own life ended in AIDS, a fact that the Arpino character, Joffrey’s real-life companion, memorializes in his comments on the AIDS- related deaths of several of his greatest male dancers. Far more than great sports figures, dancers generally have, for many reasons, extremely short careers. Great dancers are basically lean young men and women who can accomplish incredible acts of bodily movement for a few years at most. Ten years, as one dancer indirectly argues, is a long time to perform with the company, even if her interpretations are longer respected.
And, finally, if Joffrey and Arpino were not tyrants in the way that Diaghilev was to Nijinksy and the rest of his corps, Mr. A. can certainly be a difficult and dismissive man, castigating his dancers, whom he perceives as rebellious children, at the very moment he praises them in a way that they cannot know whether he is serious or not. And guest choreographers, such as Robert Desrosiers can dismiss central dancers, endangering their careers and certainly deflating their egos, with a flick of his wrist.


Altman, amazingly enough, says all of this while actually stating very little. The actual Joffrey ballet company primarily practices and performs their works, with only intermittent staged episodes, engaging primarily the “actors” of his work. Any conclusions we might make about this “company,” is presented in small gestures: the crack of a tendon which ends the career of a great ballerina, a voice raised in anger over the contradictory orders of Mr. A, a series of band-aids and bandages removed from a ballerina’s foot each night, the indignity of having to move to another barre simply to do one’s morning exercises, a work-out of an older ballerina before the younger ones arrive, the dancers’ mockery of their ballet masters at a private Christmas party, a late night dinner missed. Yet, the director, through these little gestures, reveals so much that he didn’t bother to shout.
On top of that, Altman seems genuinely interested in actually showing ballet. Unlike so many contemporary directors who seem to think dance is something better left to the camera, Altman moves his camera back, time and again, to let us actually see the performers in full perspective. Yes, at moments, just as HD Met Opera, he pushes in to see the expression of his performers (Joffrey was an advocate of that very expressive quality in his dancing, “pretty” dancing “by the beat” being his self-declared enemy), but Altman generally moves out to let us actually encounter the entire performances of great works such as Alwin Nikolais’s Tensile Involvement, the film’s opening piece, Arpino’s Light Rain, Suite Saint-Saëns and Trinity, Moses Pendleton’s White Widow, Lar Lubovitch’s My Funny Valentine (performed in an open Chicago park during a sudden rainstorm), and even Desrosiers’s somewhat ridiculous dance drama The Blue Snake. Although some dance critics did not perceive Altman’s mastery, anyone who truly loves dance will want to see this film. And I’d argue that it represents some of the most fortuitous filming of dance history of any film ever made.

As I’ve written in an earlier My Year volume, I studied at the Joffrey Ballet Company in New York for several months in 1969. Every night I would attend classes that lasted for at least one or two hours at the barre. I knew, even though in those days I was lean and athletic, that I was probably never going to become a dancer, but after several weeks I was encouraged by one instructor when I did a perfect in-line brisé. I, myself, was amazed at my accomplishment. Yet given my equally lean salary from Columbia University, I could no longer afford my lessons, and realizing that I did not truly have a dancer’s body, I soon after left my daily regimen.
It must have been in that period in New York City when I first attended a performance of the company. I can no longer remember the date, but it can’t have been as early as 1967 when the Joffrey first revived Kurt Jooss’s The Green Table, but I remember that evening as including both that performance and Agnes De Mille’s Rodeo.  It certainly made me want to dance.
Posted by greenintegerblog at 10:57 AM