It may be difficult to imagine a world without Rick’s and Elsa’s Paris, but, in reality, the City of Lights was nearly destroyed by the fleeing Nazis of 1945, headed by the old-guard Nazi general, military governor of Paris, Dietrich von Choltitz.
Von Choltitz, who’d helped to level other cities and been involved in the murders of hundreds if not thousands of Jews, was a career officer who’d fought in War I and the second World War, and believed fully in the Nazi cause. Because the Allies had demolished much of Berlin, Hitler wanted revenge by destroying Paris so that when the arriving Americans would find a city flooded and in ashes. 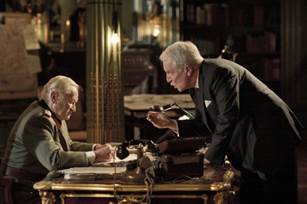 Because of Hitler’s demands, they had already set charges on the all the city’s bridges except for the Pont Neuf (leaving that as an escape route) and had rigged up bombs to destroy many of the city’s great buildings, the Opera, the Eiffel Tower, and the Louvre, along with other major structures. The force of the bridges collapsing into the Seine would flood large parts of the city, while the explosions would kill thousands of others.
Catching wind of the intended destruction, Swedish consul Raoul Nordling met with von Choltitz in his headquarters in the Meurice Hotel to accomplish a truce between the Germans and the French Resistance fighters, thus giving the Americans and French de Gaullists more time to arrive in Paris, and postponing the city’s destruction. In the end, von Choltitz, inexplicably, determined not to follow Hitler’s instructions, which he even declared was now insane and pointless since it was clear that the Germans had already been defeated. Yet Nordling must still be considered a hero in simply helping to postpone the burning of Paris.
This true version of history was recounted in René Clément’s 1966 film Paris brûle-t-il? (Is Paris Burning?), reviewed below.
More recently, moreover, German director Volker Schlöndorff has directed a remarkable version of these series of events, based on a fictionalized play by Cyril Gely, who co-wrote the script.
This elegant work is basically a debate, supposedly on the night of the Nazi defeat on August 25, 1944, between Nordling (here played by André Dussollier) and von Choltitz (Niels Arestrup). Although such a debate did not truly occur, we can forgive writers here since the fiction of the late night encounter most succinctly summarizes a series of more complex events, and dramatizes the true dangers that the great city was facing. If we can never be certain what Choltitz’s real motives were in finally determining to save one of the world’s greatest social and artistic achievements, the aptly named Diplomacy forcibly shows us some of the pushes and pulls that von Choltitz was facing.


Arestrup quite brilliantly portrays the gruff but nonetheless well informed and culturally knowledgable von Choltitz, without turning the role into either a stereotypical monster nor denying the monstrous ideas and tactics to which he was committed. While, obviously Nordling, is the moral force, and cleverly controls the conversation in a series of careful maneuvers—tossing out a series of arguments against the city’s destruction while temporarily backing away when they don’t work—von Choltitz is no patsy, and can, at moments, quite convincingly stand up for his horrific plans.
The great diplomatic, Nordling, however is a man of significant guile, whose very sudden appearance in von Choltitz’s hotel room is as surprising as an sudden vision of an angel—or perhaps a devil to tempt him. Nordling, a man of history, knows that this hotel, once occupied by Napoleon the III, who lived in von Choltitz’s very suite, had an illicit mistress for whom he built a side door and secret stairs for her nightly visits.
Although claiming complete neutrality, it is clear that Nordling is in communication with the Resistance—he has a letter from a Resistance leader, which von Choltitz tears up without reading—and seems to know a great deal about Nazi goings-on.
His first arguments concern Paris’ importance to world culture, as he attempts to appeal to the Nazi leader’s conscience and how he will be conceived of in history.
Von Choltitz, as I mention above, however, has already led such a bloody life that, now in deep pain with severe asthma and facing certain defeat, these arguments have little sway with him; he is already a kind of lost soul, and surely will be imprisoned after Germany’s fall.
Nordling then attempts to restate the obvious: that the destruction of the city will serve no purpose, arguing than even Hitler has previously spared it because of its beauty. But von Choltitz, although admitting that Hitler is probably insane, argues it is a necessary revenge for the leveling of German cities such as Hamburg and Frankfurt.
Again backing away from those arguments, Nordling spots a drawing in the general’s possessions of Abraham, and attempts to use it as a demonstration of the awful effects of blind belief, that the Jewish leader was willing to sacrifice even his son, but God spared him the action. Where is God in this act, he pleads? But the Nazi will not be soothed by that argument: Abraham is a Jew. Should he, a hater of all things Jewish, be expected to take Abraham as his model?
Although, most of this “debate” takes place in a single room, from time to time, the director pulls away to show us the actors, both French Resistance members and Nazi soldiers in action, before returning us to the room, where underlings come and go with great urgency. There are, after all, only a small number of Nazi soldiers left in the city, and so the tension grows by the minute—even if we know what the outcome will be.
For me, one of the most dramatic moments of all is an incident when von Choltitz in another fit of asthma is doubled over, demanding Nordling bring him his pills. As the Swedish opens the drawer where the pills lie, he spots a hand gun. He might easily have pulled out the gun and killed the Nazi monster right there, perhaps ending the city’s destruction, since there will no longer be anyone to give the order. But Nordling is not a murderer (and his country is, after all, neutral). He gives von Choltitz his pill, and turns again to something that seems to have disappeared from world politics: diplomacy. It is a touching moment—particularly with the stakes so high—but reveals the strength of Nordling’s cause, a rational one in a world of irrationality.
Tired of Nordling’s pleas and arguments, von Choltitz pulls out a document, signed by Hitler, and which he believes has been written entirely for him: in that decree, the Fürher is determined to arrest the wife and children of any officer who does not follow his orders. Von Choltitz fears for his own family’s lives. Turning toward Nordling he asks: “What would you do if you were in my place?” Nordling has no answer.
Yet, obviously, Nordling is already, quite miraculously, in his “place,” and he takes advantage of the situation to suggest that the general’s family may be quickly sneaked out of Germany by Allied forces to safety in Switzerland. A plan can be immediately activated (historians, in fact, believe that some such plan was worked out with the Allies to protect von Choltitz; he was never arrested after the war, and lived for many decades, even penning an autobiography wherein he argues that he never had intended to carry out Hitler’s orders).


Von Choltitz, suddenly realizing, that Nordling already knows about the entire plot, asks him outright just how he does know so much about him, Nordling admitting that the room’s large mirror is also a two-way mirror, and that the French have been spying on the Nazi’s all along.
I think there is no such evidence for this, just as there is little evidence that von Choltitz had never planned to destroy the city (why, then, were bombing devices found on all the bridges and so many monuments after de Gaulle’s forces entered the city?), but as drama it is fascinating, and helps to make Schlöndorff’s film an effective work in the documentation of how we almost lost an irreplaceable world site. Yet, all wars, this work makes clear, are meant to destroy; and we continue to lose sacred historical sites today in Syria, Iraq and elsewhere.