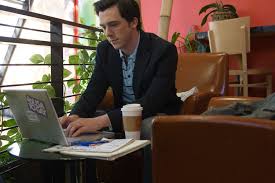 First, his hero, the good-looking, if not terribly handsome, Blaine (Nicholas Downs) seems at sea in the all-gay community of West Hollywood, in which one has to presume in has selected to live (one of the problems of Calciano’s film is that, except for Brice’s “faghag” friend Ronnie [Lynee Chaille] there is not a single heterosexual figure to be found in this movie). Although he’s, apparently, a successfully gay columnist for a small gay newspaper, USATogay (too too cute for my taste), he seems to be a bit shell-shocked by the open sexual scene in which he finds himself, seemingly wanting a relationship without any sexual exploration beforehand, or, as if the two weren’t truly compatible for a serious gay being.
“Is it just me” he broods, “who is actually seeking a relationship?” Apparently it is, according to the film’s early scenes. His roommate, Cameron (Adam Huss), even more oddly, is a standardly handsome go-go dancer and would-be actor, hardly ever seen alone in this film but for a few minutes: Brice’s polar opposite. If Brice, accordingly, is “looking for love,” he’s clearly looking in all the wrong places. And everyone around him, quite obviously, sensing his out-of-place feelings, shun him as if he were suffering from the plague.


Despite all of these neuroses, and the use of his personal computer and even his phone by his sex-driven roommate, Brice does find “Mr. Right” through a computer communication in the good-looking, innocently laid-back young Texan Xander (David Loren). They talk for hours, finding common ground in their musical interests—Xander is a budding composer—and in their approach to love. Like Bruce, Xander also has an odd roommate, but in his case a far more beneficial one, Ernie (Bruce Gray), who spends most of his day cooking for and fawning on his young renter.
After their second on-line meeting, and a cyber-sexual encounter, everything seems perfect, and they agree to meet (actually having met before at a coffee shop without either of them knowing it). Only problem, Brice discovers after they close off on their chat, is that the man he’s expecting—a fact Brice has previously known nothing about—is  Cameron who has posted his picture (not Brice’s) to Brice’s own Facebook site. The situation, called “catfishing,” of luring someone in with fictional information or with a fake picture, is a cruel reality on both gay and straight dating sites, and is seen as highly disgusting behavior—particularly when you’re as gullible and trusting as Xander!


Yet, instead of immediately setting things straight, the insecure Brice compounds the problem by insisting Cameron accompany him on his first live date. And it is here that Calciano’s film moves off into complete unbelievability.
Yes, Xander may be a kind of Texan hick (Jon Voight’s Joe Buck all over again) who wants to believe in the goodness of everyone he meets, but mightn’t he still, after speaking for long hours with Brice for two nights, have recognized that Cameron’s was not the same as Brice’s? Might he not have sensed that the self-assured Cameron, inviting him to visit the bar where he dances at night, is not a bit like the unsure and constantly apologetic man on the internet?
Of course, things go from bad to worse, as Xander, visiting the bar, gets utterly drunk, Brice suffers a near break-down, and Cameron takes the Texan home—presumably, as Brice, imagines, into his bed—but actually into the bathroom to help him puke out his guts.


By this time the viewer has almost lost all interest in either of these utterly “clueless” heroes, and begins to admire the more robust Cameron, who at least helps out the two the best he can. Perhaps, we begin to suspect, despite both of their denials, looks are more important than what comes from the heart. Clearly both Brice and Xander have misunderstood each other’s heart, and fallen in love instead with appearances (Brice taken with Xander’s beauty and Xander with Cameron’s chiseled face). By the time, seemingly hours later in this now slow-moving tale—particularly since we know how it eventually must turn out—Brice gets around to admitting the truth, Xander is ready to throw in the towel, saved only by his “wise,” equally disappointed elder friend Ernie, who finally gets up the energy to repeat to his young roommate the cliché “do not give up on love.”
Ah, yes, love wins out—at least for the moment! If only we could believe that there were real humans inside of these sexual simpletons to actually experience it.


And the very idea that Brice has suddenly been offered a job by the Los Angeles Times to write more of his cynical gay sex columns, transformed this film, for me, into a fantasy beyond the bounds of human ties—floating the film off into a fairyland space. I guess I’m just lucky, having had lots of anonymous gay sex and a long romantic love both.