confession and revenge
by Douglas Messerli

In John Cromwell’s 1947 film noir Dead Reckoning Humphrey Bogart plays an ex-paratrooper quite apparently in “love” with his former military partner. Early in the film both men express their closeness. Almost gushing over his friendship, he suggests he give up his love of his mysterious female lover:
Johnny, why don't you get rid of the grief you got for that
blonde, whoever she is? Every mile we go, you sweat worse
with the same pain. Didn't I tell you all females are the same
with their faces washed?

Johnny responds: “I think you're a great guy, too, Rip, if that's what this conversation's about. Even in the U.S.A., this world.” 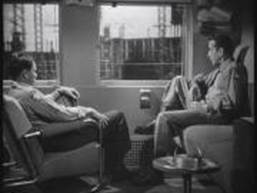 The last sentence says it all. Like many young men in the military, friendship often crossed lines. Clearly in the special military world they were more than friends, and even now, back in this world, the USA, they both continue to recognize their deep bonding and love.
Even a comic series of lines, reiterates their intimacy. Arriving in Philadelphia, a cameraman asks if the two might step out the train taking them to Washington to receive military honors, for a quick shot, as the Bogart character asks:
This is the city of brotherly love?
That’s what New Yorkers all it. They don’t live here.
I’m all for love, son.

Soon after, however, Johnny suddenly vanishes from the train taking them to receive military honors in Washington, D.C. The wave of goodbye “as if it would to be permanent” particularly troubles Bogey’s character, Warren “Rip” Murdock, and having just discovered that his friend has been using an alias, Murdock determines to begin a search for this lost partner, returning to the southern city where his Johnny Drake a.k.a John Joseph Preston (William Prince) formerly lived.
When Rip arrives, a hotel room is already waiting for him, as if Johnny  has expected him to follow. A note to Rip awaits at the hotel desk announcing that Johnny will soon call. We have already been told that they “could read each other’s minds,” and that wrote in a “special code.”
After two days, when no call calls, Rip makes a visit to the local library to learn more of his friend’s history, discovering that a few days before joining the military, Johnny—a former college professor—had been indicted for murder. How could his beloved Johnny have been a murderer?
Rip’s search for answers, we can already guess, will lead him through a hall of mirrors which includes Johnny’s former mistress, Coral “Dusty” Chandler (Lizabeth Scott), a club owner with mafia links, Martinelli (Morris Carnovsky), his murdering goon, Krause (Marvin Miller), and an ex-paratrooping priest, to whom Rip spends most of the movie “confessing” as the film’s narrative is gradually revealed.
Discovering also that Johnny has been murdered, Rip attempts to recover his former friendship with Johnny by getting to know Coral; as he himself puts it:

I hated every part of her but I couldn't figure her out yet.
I wanted to see her the way Johnny had. I wanted to hear
that song of hers with Johnny's ears. Maybe she was alright.
And maybe Christmas comes in July. But I didn't believe it

In fact, it is clear that Rip is not only confused by women, but intimidated by them. In one of the most male chauvinist statements in movie history, he explains that he would rather have women shrunk so that he might put them in his pocket, only to come back to full size when he is ready for their beauty.


This explains, moreover, several critics’ reservations about Lizabeth Scott, who was described as “expressionless,” and as acting awkwardly and deliberately. Bogart also seems grumpier in this film than usual, since the real fireworks is between him and his now dead friend. And the highly artificial, if often clever, language of the film doesn’t spring the work free from its solemnity.
Yet if we look beyond the surface story to see the film as Rip’s search through Hades to uncover the source of Johnny’s duress, the film becomes something much more compelling.
Rip, quite literally, cannot rest in peace until he his reckoned with the past: Johnny’s feelings for Coral, his murdering of her husband, and the truth of Coral’s supposed love for Johnny. This reckoning, moreover, is also a settling of accounts, which can only mean one thing, particularly when he discovers that Coral has been the murderer: her death, even if, in attempting to shoot Rip, she causes it herself.
Indeed, the film ends with a strange coda, Rip standing over Coral’s hospital bed, helping her to die by letting go of life and fall, as he and Johnny had done so many times in their leaps from planes into space. And the last word of film, “Geronimo!” represents a battle cry akin to Electra’s final dance and yelp of revenge.


Seen through this lens, Dead Reckoning, is a fascinating classical revenge drama, an often misogynistic and homoerotic work in which the hero attempts to redeem his love for his male friend by temporarily becoming him and by avenging his death, to return him—if not into his metaphorical arms—into his head and heart.  At film’s end it is Rip who has won Johnny—all the others who knew him well having died.
Finally, we can now comprehend Rip’s need for confession. In the year of my birth, 1947, the year this film was released, homosexuality—no matter how sublimated—was a mortal sin. It is almost as if the writers themselves felt they needed forgiveness for the sometimes not so subtle undercurrents of their plot.