Michele Josue | Matt Shepard Is a Friend of Mine


Michele Josue (director) Matt Shepard Is a Friend of Mine / 2015

Although I followed the news stories after Matthew Shepard was brutally beaten by two homophobic men outside of Laramie, Wyoming on the night of October 12th, 1998, I have not been able to read further about him or his death in the eighteen years since, mostly because I sensed that, even though I was 30 years older at the time of this 21-year old’s death, I had had too much in common with the young man. Yesterday, watching Michele Josue’s 2015 film, Matt Shepard Is a Friend of Mine, those feelings were confirmed, as tears streamed down my face throughout.
I too was afraid of revealing my sexuality to my own parents—although Matthew’s parents were clearly more open and understanding than mine. My own experiences in Midwestern Iowa, moreover, were not so very different from his in Casper, Wyoming, which—quite mistakenly I am convinced—my family has asserted was named after my mother’s family name, Casper. Nonetheless, Matthew Shepard’s experiences in Western America are very similar to mine, even if, decades before he was even born, I had lived in the context of different cultural perspective. 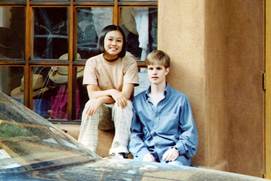 I hadn’t known that Shepard, in a far more multicultural experience than my own, had spent his high school years in a completely other country, Saudi Arabia, and that he spent his last high school years in an even more multicultural experience in Lugano, Switzerland, where he met many of the young women and men who speak of him in this film, testifying to his dynamic personality—despite his small stature and personal doubts—in a world that allowed him entry into drama and other cultural experiences. I too sought those same experiences out in my small town life in Iowa, performing in theater and attending any theatrical events I might be able to encounter. And I too lived in a remarkably liberating culture my senior year of high school in Norway, traveling with my family to Denmark, Paris, and Switzerland afterwards, so that they might gracefully return me to my, now Wisconsin, home. Another year of high school in the US matured me before entering the University.
Matthew also traveled, to Rome and elsewhere, and, eventually, in a far more adventurous trip, to Marrakech, Morocco. Had I traveled independently, as I sought to, I too might have sought out those locations. But my parents didn’t permit that independence, although a couple of years later in college, I did run away to New York, involving myself in many of the pursuits that led one acquaintance to suggest Matthew had apparently “taken chances.”
Nothing significant happened to me, while sadly, during one evening walk through Marrakech, Matthew was attacked, robbed, and raped by six Moroccan men—an experience which, as his friends and family detail, truly transformed him.
So ends my links with this handsome young man, who those several decades later attended a college in North Carolina, eventually leading to a period of living in Denver, where he apparently did not feel at home, before returning to college, now at the University of Wyoming in Laramie, Wyoming. I could never have imagined returning to Iowa, although I did leave New York in order to return to the University of Wisconsin—a very different place in the late 1960s, surely, than Wyoming in the late 1990s.
Although Matthew quickly became involved with gay rights at the University, as I too had, it is clear that his life in Laramie was totally different from mine in Madison—a difference that would mean everything for a young gay man. Like those I left behind in my home town of Cedar Rapids, it’s apparent that Matthew Sheppard felt significant isolation in his college years. And on the night of October 12th he apparently struck up a conversation at a local bar with two straight men who were pretending to be interested in his gay sexuality in order to rob him.
Whether or not, frightened by his sexual advances, they were led to greater violence doesn’t truly matter; they were extraordinarily brutal, determined to punish him for his own sexuality, leaving him to suffer their torture in an isolated place for hours before he was discovered. His wounds were so severe that even his parents could not, at first, in their rush back for Saudi Arabia to Wyoming, recognize him. Ultimately, a gay-friendly teacher was invited by family members to help encourage Matthew, still clinging to life, to let go and die.

What Michele Josue’s film reveals to us—through photographs, videos, and diary entries—is that this young man was an engaging youth, dealing with friends, mostly women, in a way that showed him to be a stunningly out-going and amicable young person who might have been a significant diplomat (as he claimed he was seeking to be) or an actor (which he sought to be, perhaps, as a way to play out identities he was now permitted in daily life).
It’s hard, indeed, to talk about this joyous young man with simply breaking into tears, as the director does when the local priest, who comforted one of the killers, Aaron McKinney, argues that he, too, as human being deserves pardon. Shepard’s remarkable parents, in fact argued against the death penalty for Matthew’s killers, and have worked endlessly since to help the cease the hatred that led to their son’s horrible death.
If Father Roger Schmit painfully argues for forgiveness, at the same moment he proposes that those who loved Matthew should “never lose their anger.” Indeed, I have to admit after seeing so many images of the appealing boy, I too became angry. Why should anyone have had to suffer the death simply because of being sexually different from most of the culture in which he had grown up?
This movie, fortunately, refuses to show that anger, instead reminding us of the love his friends felt for him, and demonstrating, remarkably, just how much he was loved—perhaps without even recognizing it during his brief life. Matthew Shepard, luckily, was not one of the forgotten, but continues to be, even today, a figure who has helped to change the entire American landscape with regard to sexuality.