believing against the truth
by Douglas Messerli

Poor Meryl Streep, pouring out her heart in her Julia Child-ramped up voice, singing as off key as she possibly can (working against her true singing ability), and tearing up every moment in which she might allowed in an attempt to bring the phenomenon known as Florence Foster Jenkins to life! If only writer Nicholas Martin had given her something to hang onto besides the fact that this clearly eccentric, wealthy woman simply adored music and had suffered the life-long indignities of syphilis (a disease Streep was also asked to suffer as Isak Dinesen in Out of Africa)! What to make of this cypher, we are led to believe, who was completely deluded about her own musical abilities? 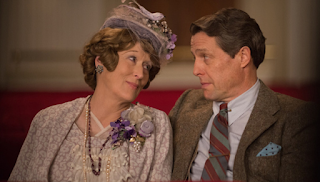 In real life, as opera historian Albert Innaurato has written, “She was compos mentis, she was not a lunatic.” After contributing money from her large inheritance to most of New York’s major musical organizations, including her beloved Verdi Club—which supported English-language translations of the great opera (a regular member of which was none other than Enrico Caruso)—and carefully arranging her personal recitals herself to be attended by only close friends and “sympathetic critics,” while simultaneously planning every detail from the seating to the food, Jenkins, a 19th-century relic, dared to move on to international acclaim through a private recording on Metronome (a best-seller at the time) and to rent out Carnegie hall in 1944 for open attendance, along with free tickets for 1000 American soldiers, sailors, and airmen.
The film by Stephen Frears, on the other hand, seems to suggest that she was utterly deluded, and that all the careful arrangements were the result of her “husband” St. Clair Bayfield’s (Hugh Grant) secret interferences, again leaving Streep’s character on the hook as a chimera.
Did or did she not actually know that she couldn’t actually sing? The movie gives her little wriggling room, showing her finally realizing only on her death bed—when in truth she had expressed the sentiment several years earlier—that “some say I can’t sing, but no one can say that I didn’t sing.”
Fortunately, this well-meaning bio-pic, alas without a real biography of its hero, surrounds Jenkins/Streep with a loving cast, most notably Grant, in what is perhaps one of his most appealing acting turns of his entire career. As her clearly loving suitor—although we’re never certain he’s in it for the money or truly loves her—Bayfield arranges everything behind the scenes, bribing music teachers, critics, cooks, and even newspaper sellers to make sure that Madame Florence is given the highest of praise or, at least, is kept out of truth’s way.
No matter that he has a separate apartment in which he keeps a mistress, Kathleen Weatherley (Rebecca Ferguson), where he lives a far more bohemian life (including a wonderful dance scene wherein we are mostly convinced that it is Grant himself that is hefting his body across the screen) that his “wife” would surely not have approved of.
One can only wonder what Bayfield’s life was really like, but Grant portrays it as nearly maniacal as, after carefully putting his beloved Jenkins to sleep, he rushes by taxi across town to celebrate his personal bacchanals, before rising each morning to plan out the next day for the diva. It’s clear, at least from this film’s perspective, that he deserved whatever gifts she gave and had promised him. He is presented as a kind of saint, and Grant gracefully accepts the halo awarded him.
And, in that sense, we do believe in his love, since, even after he loses the affections of his mistress, he remains fiercely loyal to his “real" wife (we never know whether or not they are truly married), with whom he has never had sex. He was her protector, her only protector, in a world of laughing hyenas.

Yet those laughing hyenas—which, of course, also include the audience for this film—might be tamed if only they realized Jenkins’ belief in her own talent. Yes, her singing was hilariously funny, but it also attracted a wide audience, including Cole Porter, composer Gian Carlo Menotti (see My Year 2007), Kitty Carlisle, dancer Marge Champion, Lily Pons, and her husband, orchestral musical conductor Andre Kostelanetz (in this film we see only Porter and actress Tallulah Bankhead in attendance), all of whom, presumably, did not attend Jenkins’ concerts merely to laugh. Hopefully, they saw this outrageous personality as a bigger-than-life figure who believed in herself enough to imagine that she might contribute to the passions of her life, and who, if nothing else, was very highly entertaining in a time of darkness.

In Frears’ film, after some few moments of abuse at her Carnegie concert, the attending military figures and others are called out by a coarse and gauche former showgirl, Agnes Stark (Nina Arianda) who begs for the audience to give “the dame a chance.” Miraculously, they do, and despite her inability to control a single phrase or to remain in key for more than a few seconds, Jenkins wins them over simply with the force of her determination. It was, after all, a time—not unlike our own—when believing was so very difficult.

Yet what makes this film truly enchanting is the existence of Madame Florence’s piano player with the very strange name (actually his historical name, although sources declare it’s a pseudonym) Cosmé McMoon (played with perfection by Simon Helberg, who must be gifted with some kind of award for this performance). Hired for what he has presumed as an accompanist only for her singing studies, he eventually discovers that his whole career as a pianist and composer may be in jeopardy when he is forced to play for her in major concerts, particularly at Carnegie Hall. He too, in the very beginning, is a “laughing hyena,” unable to control his chuckles as he comes away from their first encounter.
But over time, gradually getting to know this towering matron, he grows to respect her. One of the sweetest and most enduring scenes of Frears’ movie is when, unexpectedly, Jenkins visits the meek gay man’s apartment in the midst of his body work-outs, complete with the fitness magazines  (which my companion Howard Fox and I immediately recognized as “whacking material” of the time). McMoon’s place is a mess, dirty dinnerware still sitting on the table, and Jenkins, as richly garbed as she is always (in wonderful costumes by Consalata Boyle), insists she will wash up his dishes in return for his piano playing.
Abashed by her intrusion, yet unable to deny her, he begins to play, first some of his own music, to which she insists she will set lyrics; and then, one of the pieces she herself had played before her left hand had become terribly marred from the mercury treatments for the syphilis she had received as a young bride from her first husband. Playing the right hand, she is accompanied by McMoon (Helberg, a former concert pianist, despite his notoriety as a comic, played all the music on piano in the film) in a painfully transcendent scene where the two truly do empathically embrace. It’s the very best scene, perhaps, of the film, for it finally brings some insight into this mysterious woman’s passions.
After having lost everything, except money, it was only music she truly loved. So what if she herself couldn’t sing? She could imagine what it might be like to do so. She would attempt the most impossible arias. And she could convince a few others, and obviously herself, that she was truly singing as artfully and beautifully as she imagined everything might be. In a final death scene, she hears herself—Streep finally singing as artfully as she can—as she imagines it to have been. Even if many might have laughed behind her back, others—except the obvious newspaper hacks, which this film (I think mistakenly) suggests killed her*—perceived her indomitability of belief, a quality which, of course, can be terrifying, but also is sadly lacking in our world, in which belief is always alternating, changing, and diminished.
Finally, we perceive all of the film’s major figures as truly failed beings. Bayfield was clearly a hack actor who could never have achieved anything great. McMoon, not truly a significant pianist and who was an ever lesser composer, would never have achieved anything major in his career (some biographies claim he later established a gay escort service, while others suggest he judged male physique contests). Florence Foster Jenkins, as we know, was a fraud. But it was only through her that, momentarily, these men achieved something other than where their careers would have been. McMoon, despite the odds against him, played Carnegie Hall, and Bayfield organized the concert as well as Jenkins’ entire career. Perhaps that was enough to take them out of their ordinariness forever.

*In truth, she had a heart attack five days after her concert, and not presumably because of the reviews. She died of consequences of her disease, not because of the shock of reality of her singing career.