Often described as being related to director Claude Chabrol’s first film, The Beau Serge, his 1959 feature The Cousins, this time around, brings the country cousin, Charles (Gerard Blain) to the city and into the apartment of his decadent  cousin, Paul (Jean-Claude Brialy), who, with his thinly -trimmed beard, is even made up to look a bit like the devil he is. 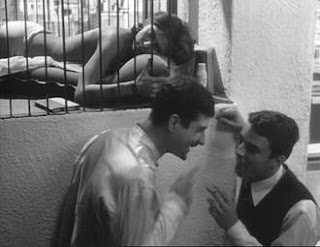 It is not merely that Paul’s hip apartment (filled with African masks, antique guns, and marine-related paintings) at the center of which is a large, open hearth, is a location of nightly heavy drinking and sexual orgies—which in 1959 may have seemed particularly “morbid,” as The New York Times’ Bosley Crowther described them—but that Paul himself, apparently into sadomasochism, likes to put on Wagner and wear a Nazi gestapo hat. His nasty friends, Clovis (Claude Cerval)—an ironic name, surely, given that King Clovis was the founder of France—and an Italian count (Carrado Guarducci) join him and his women friends in his nightly carousals.
The handsome “mamma’s” boy, Charles, has little chance in such a debauced world, although he attempts to study day and night for his law exams and regularly writes long epistles home. But a single kiss by the woman these celebrants describe as “the slut,” since she has evidently slept with all of them, sends him into a spin, as he immediately falls in love with the girl, Florence (Juliette Mayniel).
Clovis is particularly furious that Florence seems to be pretending something she is not, and arranges for her to be found in Paul’s bed when Charles returns from his college classes—classes which, it’s evident, Paul never attends.
Charles’ discovery of the sexual “betrayal” sends him into an even deeper loop as he now finds it even more difficult to concentrate. But it is clear that something else here that is going on. As any psychoanalyst might explain, the sharing of a sexual partner can easily be perceived as urge to share the other’s bed. Moreover, he Wagner record Paul loves to pay is Arturo Toscanini’s version of Wagner’s Tristan and Isolde, which suggests that a far the deeper “love” urge going on in Charles internal thinking, an unrequited relationship with his attractive cousin himself; the sexual betrayal involving Florence is just the surface of a far deeper homoerotic relationship that neither he nor the director deeply explores.


When Paul easily passes the law exams without doing any studying, and the hard-working Charles fails them, that love triggers a death-wish as deep as the two lovers in Wagner’s opera suffer. And it is only through death that their love can be consummated.
Taking up one of Paul’s wall-hung handguns (can there be a better example of male-male expression?), Charles puts a single bullet into it, determining, in a kind of reverse Russian roulette, to let chance make the decision of whether or not his beloved cousin lives. As in everything else, Paul, it seems, is lucky, and survives.


But the next morning, after hearing of his cousin’s “failure,”—the subject is his law exams but the subtext is Charles’ failure of being able to actually destroy his cousin—and attempting to reiterate their nonexistent comradery (apparently without even recognizing that Charles does share in his heterosexual revels—although we might ask whether they were, in fact, “celebrations,” but rather tortures of the opposite sex) with Tristan and Isolde once again booming out from his record player, Paul picks up the pistol where Charles left it and, as yet another “prank,” releases the trigger while Charles stares back in horror.
Chabrol does not even let us hear the gunshot; we see only a small puff of smoke. And Charles, at first, seems not even to have felt the bullet’s entry into his body as he stands a few seconds in utter disbelief before slowly falling to the floor (a kind of death that Fassbinder will later brilliantly exaggerate in his The American Soldier).
Paul, obviously shocked by the turn of events, goes to his cousin to momentary stroke his forehead—with a wonderful visual mix of hands and feet and heads—before retreating, as the doorbell rings, forcing him to face his tragic future.
His fate was determined, we now recognize, from the moment he invited his loving cousin into his life.

the next invasion
by Douglas Messerli

Edward Albee (play), Tony Richardson (director) A Delicate Balance / 1973
After a deadly quiet meal, ending, apparently, in a chocolate mousse, Agnes (Katharine Hepburn), rings for the coffee before following her husband, Tobias (Paul Scofield) into their well-to-do living room for a late night drink. Swathed in a beautifully chocolate-dotted satin gown, the imperious hostess expresses her fears as she steers her little family safely into port through the several storms that trouble their lives—the increasing distance she senses between herself and her husband, her daughter Julia’s (Lee Remick) serial marriages, and her sister Claire’s (Kate Reid) alcoholism—that one day she might simply lose control. Tobias assures she will not, perhaps perceiving that Agnes has already lost control in the sense that that harbor they are about to reach is a rotting port surrounded with gigantic rocks. 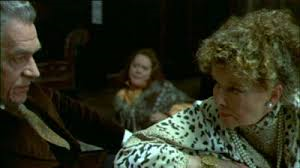 Claire, who has waited upstairs apparently until she might come down for a drink, appears, angering the suspicious and slightly jealous sister—as well she might be, given that we soon sense that Tobias is now closer to Claire than to his wife, if nothing else than preferring Claire’s company. For despite her tippling, she is a Cassandra, a seer and speaker of truth who recognizes that she is not so much “an alcoholic,” as she has been demanded to describe herself at an AA meeting she once attended, but that she drinks both so that she can see and because of what she does see.
When Agnes returns to announce what Claire has already predicted, that Julia is not finished with her fourth marriage and will be temporarily returning home. We almost expect Claire to mouth the Margo Channing quip from All About Eve: “Fasten your seatbelts, it's going to be a bumpy night!” But she remains silent, and she puts another brandy to her mouth. Indeed the central solution to this family’s dilemmas is to remain calm, to turn to silence instead of speaking openly of their problems. When Agnes talks it is generally obliquely, laced equally with self-pity and self-mockery; she deludes herself, moreover, that all the decisions to where to steer them, are really Tobias’.
Before Julia can even return to her upstairs bedroom, kept open for her returns, friends of the couple, Harry (Joseph Cotton) and Edna (Betsy Blair) suddenly appear on their doorstep. Even though Agnes and Tobias are startled at their arrival, they are hospitably invited it for a drink, of course, as Agnes attempts to illicit the reason for their late night stop. “Have they been at local club?”
It is finally up to Claire to silence her by pointing out the fact that Harry is attempting to explain their sudden appearance. He was reading a book and wife was doing needlepoint when suddenly they experienced a vast, nameless terror which forced them to flee their house. They have, clearly, not come for a visit but stay with Agnes and Tobias, permanently perhaps.
Inexplicably, Agnes quickly capitulates, leading them to Julia’s room. When Julia finally shoes up, she is given Tobias’ room, while the husband and wife are once again forced to share their own bed.
Albee never makes clear precisely what short of ghosts are haunting the interlopers or what the true relationships are between the two couples now co-habiting the upscale Connecticut suburban house. Claire has hinted that during one “hot July” both men may have shared a mistress. But we know little else. It doesn’t truly matter, for in Albee’s works the art often lies in its mysteries. Surely the demons terrorizing Harry and Edna, and now effecting the lives of Agnes and Tobias as well as their small “family,” lies within themselves, concerning their recognitions of their failures and sins of omission.
Tobias spends most of evening sitting up and simply thinking to himself, but the light of dawn the totally selfish Julia is fulminating and not being able to move back into own room, and Agnes is sarcastically wondering about what might be their “next invasion.”


When Harry and Edna reappear it is only so that they might quickly return home to pack up some of their clothing. So does Albee once again mix a kind of absurdly funny wit with a horror tale. Yet upon their return, Tobias tells the couple that they are welcome, suggesting that if they cannot be allowed, in time of such doubts, to be taken in, there can be no such as friends—a concept that brings up even stranger questions such as what are friends, and how to they connect with love or how might they be fitted into marriage? And, of course, there are so many unsaid things such as the secret sexual connections between the two men, while Agnes and Edna seem to be oceans apart. Does sharing club membership give equal permission to share the members’ bedrooms?
Claire, now given open freedom to drink in the increasing crises, remains strangely silent, only now and then offering a subtle insight or mocking their entire crisis by bringing out her accordion to play them a jolly dance. But the whole situation is made even more absurd by the fact that when the visiting couple has returned, they just as suddenly determine to go back home, their crisis evidently having passed, Tobias, strangely attempting to plead with Harry to stay. Perhaps life with the friends might, at least, have been more interesting that Agnes attempts a their “delicate balance.”
In Tony Richardson’s “canned-theater” version, filmed in only two rooms of a small British country house pretending to be a American suburban WASP enclave, much of the original humor is sucked up into the seriousness of intent (this film was part of a well-intentioned Elly A. Landau project to make world theater available on film). Yet, with a cast to die for one can perhaps endure a bit of embalming. Although Hepburn’s always impressive hauteur works well for the grand Agnes, it is Scofield and Reid who particularly stand out here—although just to see the face Cotton once again on the screen is a true pleasure. But it might have been interesting to see the true fireworks of a performance with the originally cast Kim Stanley (in Reid’s role)—who evidently so clashed with Hepburn’s acting style and manners that she had her fired. The Actors Studio vs. BBC or, at least, once again, as in the film version of A Streetcar Named Desire, brusque professionalism vs. pure gut response. It might have, if nothing else, put some more life and fun into this mostly sour-faced production.


Albee is not Williams, clearly, and his is a far more determined-to-be-profound playwright. But I always have felt that under Albee’s horror there is often lurking a kind a truly American camp sensibility that, given his upper-“crustian” childhood, Albee could never admit. Sometimes, I think, if only he might have gotten out of his darkened or even sunlit drawing rooms and walked back into that bench in the park, Albee might have found a real world which he might have found hilariously silly. Certainly he later did find a lovely goat in the middle of a field.
And what might be the “next invasion” upon the walled-up family terrified of the barbarians upon their doorstep. Tobias and Claire alone know the answer, “don’t bother to let them in, they’re already here.”