the idea of god

I remember first seeing Ingmar Bergman’s masterful Fanny and Alexander in 1983, on its first US release. Although I now remember it fondly, inexplicably I found it lacking, probably because it did not have the deep complexity of his earlier works, and, in its narrative conceits, was simply too “spiritual” and “magical” for my younger tastes. Seeing it again, with my friend Pablo, yesterday at LACMA’s (Los Angeles County Museum of Art) Ahmanson Theater, in conjunction with the Guillermo del Toro Show, I had an entirely new revelation, loving it more than I had ever imagined I might. 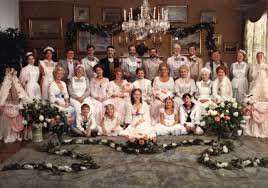 I remembered well the early family scenes, where the Ekdahl family celebrated a near bacchanalian Christmas feast and drunken festivities after. Bergman gradually introduces us to the major players through the family matriarch, the beautiful Helena (Gunn Wållgren), awaiting her large brood coming from Oscar’s (Allan Edwall) local, small-town theater. With Oscar and his loving wife, Emilie (Ewa Fröling), come their children, the titular figures Fanny (Pernilla Allwin) and their son Alexander (Bertil Guve), their slightly sexually predatory uncle, Gustav Adolf (Jarl Kulle), and his forgiving and loving wife Alma (Mona Malm), their children, and, arriving a bit late for event, Carl (Börje Ahlstedt) and the family pariah, his German wife, Lydia (Christina Schollin), who is nonetheless an also loving woman upon whom her financially distressed husband depends. Along with numerous older great aunts and uncles, as well a seemingly endless number of servants, including Maj (Pernilla August), who whom Gustav Adolf is having an open affair, they all gather to celebrate in what can only be one of the most beautiful Christmas events ever put upon screen. No wonder I remembered this scene more than all the others that followed. Among the guests is also the Jewish pawnbroker and furniture salesman, Isak Jacobi (the great Bergman actor Erland Josephson) who has been a long-time lover of Helena.


This family, quite obviously, one of great wealth and open sensibility, is a loving one, offering up to its younger members, particularly Alexander and his sister, a world of great myth and imagination, as he performs in his bedroom marionette plays and enjoys cinematic tableaux  that he imaginatively recreates. It is a joyous, beautiful world, almost bursting out of Bergman’s frame, casting a golden glow of the world around them. The Ekdahls, despite their sometimes petty peccadilloes, live in a blessed world, protecting their own.
Unfortunately, that world entirely collapses—at least for Fanny, Alexander, and their mother—when the beloved Oscar collapses on stage during a production of Hamlet, a dies of a stroke a few days later, Emilie crying out in deep grief which troubles her sensitive, but always over-hearing, son. Only a few months later, Emilie—not so very different from Hamlet’s mother—falls in love with the local Bishop, Edvard Vergérus (Jan Malmsjö), a handsome, aging man, who has lost his own family in a tragedy years earlier.
Despite Alexander’s and Fanny’s reticence in accepting the relationship, Emilie falls in love, hoping to convert the Bishop’s sometimes unforgiving behavior through her own acceptance of the world which she has known from the Ekdahl family. When her new husband-to-be demands, however, that she and her children move into his much more austere bishopric with nothing of their own possessions, we know that things do not look good; and even the Ekdahls doubts whether their marriage might last.
After having presented a world on screen that was absolutely filled with beauty and even excess, Bergman now shifts his camera to the kind of bleak visual world of the Swedish filmmaker Carl Dreyer. Although the film remains in color, all beauty is drained out in the dreary black and whites of Vergérus’ dreary rooms, where windows are permanently shuttered and doors are regularly locked. The children are removed to a kind of prison-bedroom, with few toyful pleasures, and punished for even the slightest infraction. When, hating his new father-in-  law, Alexander dares to tell an awful story about how the Bishop’s family has previously drowned in their attempt to escape him. We can’t know whether or not his imaginative telling is true or not; but it seems so close to the truth that Vergérus, hearing about his apostasy for one of his servants, determines to punish the young boy with a brutal caning, leaving him bloody and in tears.
By this time, Emilie, pregnant with the Bishop’s own son, determines to leave him, but, as she explains to her former-mother-in-law Helena, he has told her that if she were to leave, he would keep the possession of the children; a situation she recognizes will be untenable for their safety.


To protect Emilie and her children, Helena calls in her dear friend Jacobi, who, pretending to purchase a large trunk, into which he secretes the children. When the Bishop senses that he is  hiding the children, he rushes upstairs to check on them, only to find—in the first of several miracles that involve Jacobi  and his family—the children still upstairs with their mother. Meanwhile, the children are spirited away, and Emilie, determining to escape with them, feeds her husband a bromide-laced drunk—which she herself has been served by the horrific Bishop’s sister—to her husband, running off the moment he has fallen into his drugged condition.


The wonder of Bergman’s film is that it doesn’t end simply with this perplexing wonderment, but expands our conceptions of reality, as Alexander, lost in the perplexing maze of the Jacobi house, meets up with Jacobi’s puppeteer son, who terrifies him with a scary tale of God, and meets the even more enigmatic “brother,” Isak, locked away in a room wherein he sings through the night. The “brother” is actually and inexplicably a young woman who taking Alexander into a nightmare-induced vision, shows him how the Bishop will be destroyed by a terrible family fire.
Although Emilie, through her bromide-laced drink, is slightly implicated in her husband’s death, the police absolve her: she was, after all, not there, and did not cause the fire that killed him. And, in the final scenes, of this magical lantern world, we are returned to the earlier scenes, now filled with two new children, Emilie’s ne baby and Maj’s child with Gustav Adolf. All is again beautiful, and order returned. Only the ghost of the Bishop threatens, very briefly, young Alexander’s consciousness. But the last scenes, as he lays his head upon his grandmother’s always embracing breast, she reading to him passages from Strindberg’s The Dream Story which assures him “all of our lives flow into one another’s” and that even a pebble is an idea of God, at a level just outside of view. Her reality easily blesses her young imaginative grandchild, and we can rest assured that his life will be sustained in the Ekdahl world.