“Only connect” is the epigraph to E.M. Forster’s novel Howards End, and in the James Ivory  film, based on Forster’s work, the characters spend most of their time connecting, most often by accident, both emotionally and intellectually. Indeed the two Schlegel sisters, Margaret (Emma Thompson) and Helen (Helena Bonham Carters), along with their brother Tibby (Adrian Ross Magenty), encounter both the Wilcox family and the Bast couple so often, that it appears that the whole of Britain is a little neighborhood wherein coincidental encounters are simply to be expected. 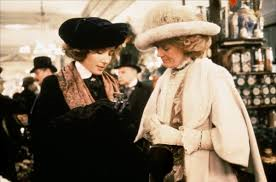 This is made even stranger, since the aristocratic Wilcoxes, Ruth (Vanessa Redgrave) and Henry (Anthony Hopkins), along with their two sons and daughter, are definitely not the “connecting” kind. Unlike the friendly and outgoing Schlegels, they see little reason to be bothered by others, preferring to stick to their own kind. Still after meeting the Schlegels on a  German excursion (which takes place before the start of the movie), they invite Helen to their home at Howards End, where she promptly falls in and out of love with Paul Wilcox (Joseph Bennett), and then, evidently by accident, they rent a large home directly across the street from the Schlegels’ small apartment. Soon after, against all logic, the reclusive Ruth develops a deep friendship with Margaret, to whom, on Ruth's deathbed, she attempts to will their Howards End home; and, even more remarkably, after his wife’s death, the unsociable Henry falls in love with Margaret and asks her to marry him.


Similarly, after accidentally walking away from a lecture with Leonard Bast’s (Samuel West) umbrella, Helen is followed home by the poor clerk, later runs into him on a London street (just as the Schlegels had previously run into Henry on the street), and, upon finding the Basts  jobless and starving—due, in part, because the Schlegels had encouraged him to quit his post after Henry’s advice concerning the financial stability the insurance copy for which he worked—drags them to Evie Wilcox’s wedding party. As if this illogical decision were not strange enough, Mrs. Bast, Jacky (Nicola Duffett) immediately recognizes Henry as a man with whom she had had an affair as a young girl in Cyprus. Meanwhile, Helen has a short affair with Leonard, which ends with her becoming pregnant. And near the movie’s end Leonard desperately seeks out the Schlegels at Howards End, only to be killed by Henry’s mean-spirited son, Charlie (James Wilby) in revenge.


With Charlie now in prison and Paul relocated in Nigeria, Howards End (despite the family’s early attempt to deny their mother’s deathbed wishes) finally does end up in Margaret’s hands, with her intention of handing it over, at her death, to Leonard Bast’s and Helen’s son.
I discuss these several coincidental encounters (there are even more) simply to reiterate just how “creaky” is Forster’s plot. If someone were to attempt to explain these series of events in real life, I think we would all suspect their honesty—or even sanity.
It’s clear that Forster was using these three different sets of people—aristocrats, well-off bourgeoisie, and working folk—to speak of the Edwardian Age on the edge, literally, of significant changes, resulting in the death of the first, the resurgence of the second, and the rise of the last. He also, more subtly, interweaves these three grouping by their perspectives to time: the aristocratic Wilcoxes are all about the past, the Schlegels are very much in the present, and the Bast’s, alas, will exist through Leonard’s son, only in the future. In short, the original author’s tale, although richly written and entertaining, is a thoroughly artificial one, having little to do with real life. That never bothers me in fiction, but is a problem for some in the far more “realistically” bound medium of cinema.


For all that, James Ivory’s direction comes quite brilliantly alive through his careful (also his major flow) directorial presence, the well-crafted adaptation by Ruth Prawer Jhabvala, the gorgeous set decoration by Ian Whittaker, and the near-genius acting of his cast. Along with the beautiful restoration of the 1992 film, which I saw again the other day in a movie theater, this motion picture is entirely a treat for the ears and eyes.
Emma Thompson as Margaret is near perfect in her often clumsy forwardness and her near endless patter, but also in the subtle mental changes that connubial betrayal and the gradual recognition of her husband’s cruel actions enact. If she begins the film as a strong-willed, forward-thinking idealist, she ends it by being more like her quiet, self-reflective friend Ruth, truly becoming the rightful resident of the elder’s beloved house.
Redgrave’s Ruth is a far more difficult and self-contradictory character, a woman relieved in not being able to vote, yet who finds Margaret a remarkable figure: as a woman who despite her self-conscious awkwardness is capable of doing great good. Redgrave, one of my very favorite of actresses, is not quite perfect for this role, and has a few mannerisms here that I’ve not previously noticed. Yet, she is always so amazing to watch that she does almost carry it off.
Although prone to overacting by underplaying every role, Anthony Hopkins as Henry comes off more straight-forwardly in this work as a failed, even, at times, somewhat evil human being who, nonetheless, is also a highly vulnerable one, who realizes, at film’s end, that he has helped to make his son Charlie into an even more detestable man than himself.
Carter’s Helen is a more transparent being without the depths of her older sister, but yet by film’s end she certainly shines as an independent force, willing, without shame, to raise her son to care for the world around him.
Even minor figures such as Leonard, with his dreamy intellectual pursuits of nature and the stars, is well portrayed by West; and as his overweight and courser wife, Jacky, Duffett is nearly perfect.
Like Pauline Kael, I have long carried a kind of grudge about Ivory’s films; as beautiful as they are, they seemed to me to be more like a BBC Masterpieces series rather than more challenging and original cinema. There is the aura of “literary” about most of them, and they often simply smell of libraries and museums from which the director and writer have adapted their stories. Yet, after all these years, I might be able to rethink my opinion given my enjoyment of Howards End the other day.