Marcin Wrona’s 2015 Polish film Demon is a fiercely eccentric work using several different genres. Many critics—I believe mistakenly—have described the film as a horror or ghost tale, and certainly it does have some elements of those genres, in particular a great many skeletons rattling in the closets of the Polish landowning family at the center of this work. It is also right out of Yiddish folklore, replete with a dybbuk and possession. There are also a number of absurdist-like and very humorous elements akin to a great many of Polish short and longer fictions. But primarily it is a sophisticated political study of both the highly anti-Semitic Poland of World War II and today’s continued desire among many Poles, including their current government—who has recently outlawed references to the Holocaust “death camps” in their country—to white out Poland’s haunted past. 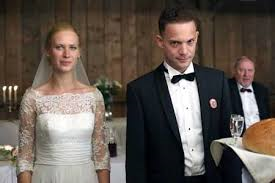 Living in London as a Polish émigré, the “hero” (or perhaps we should describe him as the  “victim”) of this story, Piotr (wonderfully played by the Israeli actor Itay Tiran) meets the lovely fellow-countrywoman Zaneta (Agnieszka Żulewska), and quickly falls in love. She desires a traditional Polish wedding, which as Wrona’s wife, Olga Szymanska describes it, often lasts up to 4 days: “There’s much alcohol,” she wryly comments, which often results in a kind communal insanity. And in this sense, Wrona’s film shares yet another genre, that of the drunken banquet film such as Wojciech Smarzowski's The Wedding.
Although Zaneta’s parents are somewhat disturbed by the short period of their romance and by the fact that Zaneta has not chosen some “nice Polish boy”—even though Piotr is of Polish descent and speaks the language fluently, he is still considered an outsider—they nevertheless plan the huge celebration in a large barn on their crumbling estate, which they intend to pass on to the married couple.
The outwardly joyful Piotr enters this community—now primarily a territory destroyed by strip mining and built up after the war with Stalin-like housing developments—excitedly, even planning to help to reconstruct their local bridge which has been destroyed during the war (suggesting that he must work as an engineer).
Accidentally, while searching out the land surrounding the house, he encounters the remnants of a body. Perhaps, he, himself, suspects what he doesn’t want to know, that these remains are of some World War II victim. And we quickly covers his discovery over with soil without saying anything to his fiancée of soon-to-be parents-in-law.
The wedding is performed and the celebrants retire to the large bar to drink and dance away the night—and perhaps several days and nights after. The beautiful young couple mix with guests, including Zaneta’s brothers, one of whom had introduced the couple to each other back in London. A friendly professor Szymon Wentz  (Wlodzimierz Press)—the “invited Jew”—gets up to speak, boring his now half-drunk audience with his academicism. The local priest and doctor are also in attendance.


As at all such events, the time comes for the groom to dance with his new bride, as the crowd draws back to watch them. But suddenly as they begin the groom’s nose begins to bleed, and he is forced to pull his head back. The slightly worried Zaneta quickly shuffles him off to a cellar room to recover, as the bride’s father (Andrzej Grabowski) and mother take to the microphone to assure everyone that all is well, the music starting up once again.
Back in the cellar, the bleeding has stopped, and Piotr is ready to return to the party. But when he once again reaches the floor, he strips off his shirt, bends back his head in what appears to be an impossible affliction and falls into what seems to be an epileptic fit. Has he ever told Zaneta that he had epilepsy, ask the worried in-laws?
Dragged down into the cellar once again, Piotr now begins speaking in Yiddish, a language which the family does not even recognize; is it German they ask one another. The doctor is quickly called, who provides a sedative, but when that doesn’t work, the priest is called whose placid words of faith accomplish even less. Only when the Jewish teacher arrives, hearing the Yiddish and the name of Hana does he realize what has happened. Hana, a beautiful Jewish girl, with who he himself was once in love, disappeared during the war, he explains, and has now apparently taken over Piotr’s body. We know this to be the truth because Piotr has seen visions of the beautiful Jewish girl (Maria Debska) just prior to his possession.


Zaneta’s parents, terrified by the situation, order up more vodka, demanding the guests celebrate in drink, assuring them that all is in order. Before long, all are so utterly drunk they are beyond any rationality. And they now speak openly about their xenophobia and ancient bigotries, one guest saying "In the old days it was simple. Everyone was Polish[...]And then the bad ghosts came in and divided all the Poles[...]First Germany, then Russia, then finally Israel."
The professor takes a group of former banquet-goers on a tour of the past, while the younger brother tries to dig up the ground where Piotr has now told them he has seen the bones of the dead woman. When, finally, Piotr completely disappears, the father brazenly attempts to tell the celebrants that the entire event has been simply an hallucination, that the wedding itself never happened. "We just have to sleep it off.” Like the party guests of Luis Buñuel’s The Exterminating Angel, they are finally released into the night, determined to forget whatever they might have learned from this terrifying experience, just as much of today’s Polish population is determined to forget the horrible events of the long ago past.
The last scenes of the film show large caterpillar trucks tearing down the old farm estate, as if attempting to wipe out even the slightest of traces. A car belonging to the couple is tossed over a cliff into the waters below. The events of the film itself have been erased.
Even sadder, the terrible lessons of this morality tale may have taken their toll on the film’s director. Quite inexplicably, the newly married and increasingly acclaimed young filmmaker, Wrona, during his film’s premieres at the 2015 Toronto Film Festival and at another festival in his native Gdynia, Poland in September—the year before I finally saw this film—apparently committed suicide, his body found hanging in a local Gdynia hotel bathroom. The demon, evidently, came from within.