no satisfaction
by Douglas Messerli

Nagisa Oshima (screenplay, based on a fiction by Yamada Fūtarō, and director) 悦楽 (Etsuraku)(Pleasures of the Flesh) / 1965

Tutor Atsushi Wakizaka (Katsuo Nakamura) has been invited to his former student’s wedding, which he witnesses with great pain, for he has long been in love with Shoko (Mariko Kaga). Indeed, as we soon discover in a flash-back, he has killed a man for her, after the villain, who had sexually molested the young girl, returns to blackmail the parents who have kept the long-ago event silent. Asked by the parents to do something about it, Wakizaka follows the blackmailer onto a train and strangles him, tossing his body off the train. 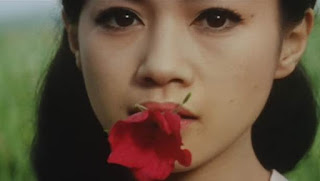 What’s more, another man has seen the murder, and now comes to him with a rather outlandish proposal: the petty bureaucrat, Hayami (Shoichi Ozawa), has embezzled 98 million yen, and realizes that the missing money will soon be noticed, and he will go to jail; but if the police cannot find the money, at the most he will get only a 5-year term. He asks that, in return for his silence about Wakizaka’s murder, that the tutor hold the money in his absence, returning the suitcase to him upon his leaving prison. Of course, if Wakizaka does not live up to the bargain, he will be turned in to the police and even killed.
Only now can truly understand why the foolish and financially destitute Wakizaka is disturbed by Shoko’s wedding. He is a broken man, threatened by a stranger, with no future prospects. Indeed, in Nagisa Oshima’s hands, the story of this well-meaning loser is almost comic. It takes only an imaginary vision of Shoko’s return to unhinge Wakizaka, as he suddenly determines to open the suitcase and begin spending down its millions of yen on, as Oshima’s title hints, The Pleasures of the Flesh.
Wakizaka’s first choice, Hitomi (Yumiko Nogawa), looks vaguely like Shoko, but is a prostitute who, at the moment, is attached to a gangster. With an offer of 1,000,000 yen a month, who can refuse? Hitomi, becomes quickly spoiled with her new life, determining to get a facelift and developing lavish habits. When her gangster boyfriend returns to claim her, she protects Wakizaka from possible violence by cutting off part of her own finger, as a sign of her return to the “gang.”


The ex-tutor’s second choice, Shizuko (Masako Yagi). is a married woman; but with a husband who has no job and who is troubled with a sick daughter. She takes up Wakizaka’s offer and becomes his lover, secretly meeting her husband on the side, but in the end, upon observing her secretive comings and goings, he offers her money and a house just to get rid of her.
The nurse, Keiko (Hiroko Shimizu), creates a more serious situation. She is willing to go with him for the money—it will certainly help pay for her ongoing research—but will not let him sexually touch her until he finally marries her; yet love is still fleeting, and he soon loses interest, taking up, as he began, with another prostitute, this, a mute girl Mari (Toshiko Higuchi), also controlled by a gangster pimp, who’s willing to temporarily give up his girl for the money she brings in. At least Mari is sexually willing and, unable to speak, cannot make his life as difficult as his three previous partners.


The date of Hayami’s parole, however, is nearing, and Wakizaka fears for his life, even trying to drown himself—unsuccessfully. It turns out Mari’s pimp, so impressed with Wakizaka’s spending, knowing that Hayami has died in prison of pneumonia, is out to reclaim the prisoner’s money. Wakizaka, having spent nearly all of the money, laughs, admitting his guilt, and as the pimp moves to kill him, Mari stabs her prostitute friend, again saving Wakizaka’s life. If nothing else, his unloving women friends have kept alive just long enough to suffer the tortures of his actions.
With nowhere left to go, the now almost comical Wakizaka returns to his old apartment, where he is visited by Shoko, willing finally to have sex with him if only he will give her enough money to save her husband’s business from bankruptcy.
Penniless, and shocked by the turn of events, Wakizaka reveals his past crimes, all committed in Shoko’s name, without telling her that the man he murdered was her former molester.
Soon after, the police come for him, as he quickly puts a poison capsule (given to him by his former nurse lover) into his mouth. He insists he will swallow it if the police do not reveal who has turned him in: of course, it is Shoko, the only woman he has truly loved.
Oshima’s first independent feature, accordingly, is a wonderful mix of irony, comedy, and tragedy. As in so many of his films, the crimes of its central character arise not so much from personal decisions but from the evils of the society itself. For such poor, unimaginative men like Wakizaka there is no salvation, doomed as they are, by their very social and psychological situations.
In 1965, upon the first showing of Oshima’s film, his work caused a great deal of controversy for its seemingly borderline pornography or “pink” porn qualities and its relationships with the yakuza/gangster films. Today, as critic Dan Schneider has pointed out, it might get a PG-13 rating. But it also has become far clearer, over the years, just how politically astute is Oshima’s metaphorical satire. Not only is the film’s hero looking for love in all the wrong places, but he can clearly get “no satisfaction” in a society stacked against him from the very beginning.