who’d have imagined?
by Douglas Messerli

Steve Coogan and Jeff Pope (screenplay, based on the book The Lost Child of Philomena Lee by Martin Sixsmith), Stephen Frears (director) Philomena / 2013

I did not see Stephen Frears’ 2013 film Philomena when it first appeared in theaters. Actually, I should admit, that I chose not to. Although I love Judi Dench, who starred in this movie, I felt the film, given what I read in the reviews, was probably a bit too sentimental and, most importantly, predictable in its plot; based as it was, on the true story of Philomena Lee, who as a young pregnant girl, was literally sold in a four-year bondage to an Irish nunnery, forced to suffer the dangers of a breach birth, and whose child was sold by that institution to an American couple, I felt I could already smell the heavy breath of its panting searchers, as they uncover the unpleasant truths. 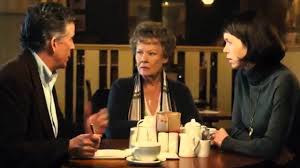 It is hard to re-witness these events without feeling as does the journalist Martin Sixsmith (Steve Coogan) and Philomena’s  daughter (Michelle Fairley) that these nuns were “evil” or, at the very least, “un-Christian.” Certainly their activities share some qualities with the Boston Catholic Church leaders revealed in Spotlight.
But the surprise here, and the important difference between Philomena and all the others is that, despite her sorrow, pain, and suffering at the hands of the nuns, she has not lost her faith and has found a way to forgive and perhaps even explain away the acts of these now elderly and dead sisters of mercy—despite the fact that they have continued to lie to her and have themselves, so the local populace insist, purposely burned the adoption papers (while saving Philomena’s own contract to sign away her rights to her own son) to hide their actions.
Frears, to give him credit, lets the facts speak for themselves, without judging the “little old Irish woman” at the film’s center. But we also have to question that suggestion that Philomena is a kind of provincial simpleton, given her later easy acceptance and even eerie recognition that her son’s being gay (“I felt he was perhaps oversensitive”) and her determination to visit her son’s former gay lover. It is she who gets through the doorway to that important sliver of the past rather than the far more savvy, stubborn, and knowledgeable Sixsmith.


And what the movie doesn’t quite highlight, but very subtly hints at, is that Sixsmith, fired from his job as a writer for the Tony Blair administration, is in many ways not so very different from Philomena’s son, who despite his being gay, worked for the Regan and Bush administrations. Indeed, Philomena immediately notices what he misses, as she observes in an on-line photograph of her son, adopted and raised as Michael A. Hess, that Sixsmith had already crossed paths with her son in Sixsmith’s former role a journalist-photographer. Indeed, the men share much in common, particularly if we comprehend Sixsmith’s cynicism as surely being similar to defense mechanisms which Philomena’s son must have had to create as being a gay in Regan’s administration. Michael A. Hess died from AIDS—the disease for which Reagan had refused to provide research funds.
Predictably that “little old Irish lady” and the brash Sixsmith bond in ways that are subtle and hard to imagine, particularly given her preoccupation with popular Romantic novels, the plots of which she recounts in enormous detail, the lack of “predictability” seeming to be the most important elements of her delight in the genre.


In fact, what I described as my very fears about this film seems to be its central subject. Nothing about Philomena is quite to be expected. Even as we quickly perceive that these not so holy nuns were dealing in a kind of slavery and child abuse all in the name of the punishment for the young girl’s social and familial rejection on account of their sexual indiscretions, we cannot have “imagined” (as Philomena keeps claiming about her novel’s plots) that she could possibly have joined with the generally agnostic and often caustic journalist, or he with her, to accomplish a bit of sleuthing that would have a profound effect on both of their lives.


Even when they have finally accomplished much of what they set out to do, both come to switch positions: he suggesting that he won’t publish the story if she doesn’t wish it to be known, she determining that he should publish it.
And then, the total “surprise” in the final encounter with the “terrible” Sister Hildegarde (Barbara Jefford), the last living member of the order during the days of its baby-selling activities, who, when confronted by Sixsmith, not only defends her actions but argues for their morality. It all reminds me a great deal of the 2016 French-Polish film I review below, The Innocents. In both these films, we perceive, belief is how you define it, what you make of it. And, quite clearly, Philomena has done the best job of carving out and living a life of a true faith.
“I never saw that one coming. Who’d have imagined?” Philomena is fond of asking. Who indeed might have suspected that the little boy at the film’s beginning did, in fact, recall his mother and visited the Irish community in the hopes of finding her, and, most surprising of all, had asked his lover to bury him, along with the many pregnant mothers who did not survive childbirth, in that community’s cemetery. This seems simply to be something of fiction, not of truth. Yet, apparently, this is what occurred. And by film’s end both of these unlikely road buddies have found their way to previously unimagined new lives.